I recently read this fantastic article on why vampires would have a population problem. Believe it or not, this has always concerned me.

I solve a similar crisis in my Victorian London by making it very difficult for vampires to create other vampires. It’s a matter of excess soul, you understand. How to measure soul and predict bite survival rates becomes a driving force behind scientific investigations, resulting in the development of (and money behind) steampunk inventions. 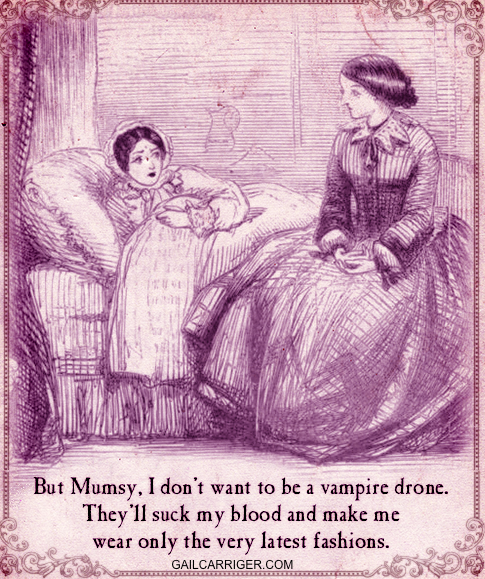 But, I must say that I find the vampire age gap even more worrying. Let me put it this way: how creepy is the idea of a 60 year old marrying and 14 year old girl? Well then why is it suddenly not creepy for a high school emo-girl to date an 1078 year old man? I don’t know about you, Gentle Reader, but I get a bit wrinkle-nosed at the thought. My hero is 200 or so years older than my heroine and I decided it was allowable only because her prospects were very poor indeed, being quite the spinster and very much on the shelf. But still, one wonders. Does maturity stop at the moment of immortality making a relationship of such proportions allowable? How old is too old? Troubling thoughts indeed.

Writing is a fairly lonely business unless you invite people in to watch you do it, which is often distracting and then have to ask them to leave.