I’ve been moved to blog about it because a recent episode of Supernatural (link launches video) was based entirely on this concept, see The Monster at the End of This Book. Sam and Dean encounter books written about their own lives (fanfic!), and visit forums (based on the existing ones for the show) that deconstruct and complain about said books (there is even a nod to slash).

Usually, lamplighting occurs only briefly in a book or TV show. But sometimes a show will go all out and use this technique in an entire episode to “answer back” to the fans (Star Trek and Stargate are notorious for doing this).

Often, these episodes become fan favorites, but newcomers will not quite understand what is going on. This is entirely different from spoofing (see the Star Trek episode of CSI, or the Farscape episode of Stargate) wherein one show openly riffs on another in good fun. Lamplighting specifically pertains to when a show or book mocks itself. (I did some internet hunting and didn’t find anything out there on the subject, so it may go by another name in the film/stage industry.)

Let me give you a classic example, Gentle Reader: the moment in Star Trek where someone asks Worf why Klingon foreheads changed, and is answered with a curt “we don’t talk about it.” In fiction, lamplighting is often used by an author to highlight her own mistake, or her obvious use of a common trope.

This is something the reader has probably already noticed and is annoyed by. By lamplighting it, the author rewards the reader for noticing, so the reader no longer feels annoyed. 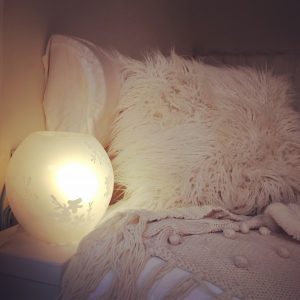 If done correctly, the author can also generate funny elements at the same time. Lamplighting is an excellent tool for comedic writers as, instead of trying to hide a flaw the writer highlights said flaw and pokes fun at themselves for putting it there.

Doing this without breaking the fourth wall can be a delicate dance but when it works, it works really well. The reader feels like they got a special little cookie but didn’t have to suspend disbelief. “Prose is architecture, not interior decoration.”