BookExpo America 2009: 2-Day Fly By Report, or One Author Amongst the Madness

Well, Gentle Reader, what a lovely crazy zippy New York jaunt. First let me welcome any of you who found me via the BEA and explain that this post is a tad more lengthy and mundane than normal. I promise my regular blogging tends to me of the brief-and-comic or Victorian orientated variety, only conventions seem to drive me to new heights of verboseness. Thanks to the smartbitches for this twitpic!

But, BookExpo America 2009, let me tell you, madness was had, but of the good well-dressed variety. Below I present a full report, but I’ve linked it out for the generalists amongst you and simply left the final tally and summation. That said, there are some juicy little tidbits in the details (honestly – aren’t there always?) so you may find the entirety worth reading.

I arrived at the hotel only 2 hours delayed by the usual cornucopia of plane shenanigans and a taxi driver who could not find the hotel, ah New York. Hotel turned out to be a denizen of that peculiar combination of old world and new that only breeds on the East Coast. It was very tall and skinny and I found myself on the 15th floor in swanky digs that had a 1940’s does retro London feel. The suite reminded me irrepressibly of England, with electrical outlets out of which all modern plugs gently fall. I was deeply pleased to find a tiny kitchenette in residence with the ability to boil water. This meant tea and oatmeal as needed (so long as I could get hold of milk). The Roger Smith is the kind of hotel that supplies a full ironing board and complimentary umbrella (yeah!) but no room service or bellhop. I changed quickly and dashed downstairs to meet with the very patient Devi and Alex for drinks in the tiny hotel restaurant. We ate the inevitable cheese platter, my editor has a one-track obsession with the humble cheese in all it’s many incarnations (some day I’ll get her out to California – now there we do cheese!) and I drank one too many cocktails. Devi is tiny but I defy any amongst you, Gentle Readers, to try and out-drink her. We discussed strategy for the morrow, gossiped about things we probably shouldn’t have, and giggled a lot. Good folks, the Orbiters.

I retired to unpack, conducted mass ironing, and attempted to go to bed far too early in order to get myself onto the right time zone. The city that never sleeps is more aptly the city that never stops beeping, I’ve never been in such a horn-happy place, luckily I brought earplugs.

I was to be at the Orbit booth by noon. I managed to convince my odd little hotel to send me up a large glass of milk, delivered by the adorable Italian manager of the bar downstairs. We exchanged pleasantries (me in fluffy bathrobe, plastic shower cap and half makeup, him without necktie or name tag). He left with a “chow,” which made me wonder if he sensed my deep affection of his homeland, or just liked to toss the Italian male charm at women in bathrobes.

Still, victory was mine, milk! I commandeered the iPod dock for loud tea-making music and managed to achieve delicious tea and oatmeal with only a microwave and a coffee maker. Thus I achieve a half-human state at (for me) 6 AM. Nothing like tea and oatmeal to make a girl feel like all is right with the world. Then I tackled makeup, which was easy, and hair, which was impossible. Devi and Jack at the Orbit booth. Note: Jack dressed to compliment my red and cream outfit, Devi to go with the book cover (through she’d never admit it).

Arrived at BEA and met the lovely Jack who proceeded to shepherd me all around, and I do mean ALL. The BEA consists of a vast set-up of trade-show style booths – some clubbed together under one massive publisher awning (Orbit was with Hachette), some on their own. I didn’t have time to track down what few friends I had there, but I did run into Loyd Kahn of Shelter Publications and Jack introduced to me to copious members of the upper reaches of the publishing industry. It was brain numbing. Everyone I met was quite lovely, and I seemed to meet everyone. The attire of preference was suits on men and adorable skirt outfits on women. I itched for my camera – New Yorkers sure do know how to dress. Jack and I grabbed some lunch and then wended our way back to the Orbit booth for the Infamous Tea.

Tea went over extremely well. I had people there waiting politely for me to sign the ARC almost the entire 2 hours. Not a crush, mind you, but it was pretty darn steady for an entirely unknown author. Kristin showed up and I barely had time to say hi. She supervised and took pictures, while Devi acted as my personal assistant, flipping to the title page and passing me books, and Alex, Jack, and Kurt (borrowed from Orbit’s manga line) worked the crowd. Mine was one of the few galleys on offer this BEA and we certainly gave out a lot of them. Everyone was enthusiastic and very sweet about Soulless. I do hope they all like my little offering.

Galleycat senior editor and tweeter Ron Hogan dropped by for a quick video interview – I do hope I didn’t make too much of a fool of myself, I was pretty frazzled by that point. His tweet quote made my day (and netted me about 20 new followers). “Soulless by @gailcarriger: I haven’t read a 1st chapter of a debut fantasy that hints at so much awesomeness since @naominovik”.

The internal Orbit folks kept coming over throughout the day and were amazingly enthusiastic about the book and its prospects. It’s awful nice to have sales and marketing on my side.

After tea, Jack, Tim, and I headed back to my hotel. I discovered my cell phone was MIA, left it at the booth (good riddance to bad rubbish, if you ask me). I changed and we headed out for quick dinner and then to the outrageously swanky Hachette cocktail party. Quite packed. I meet a couple of adorable authors, the very drunk producer of Slumdog Millionaire, and consumed a screwdriver because the vodka on offer was good and red wine makes me sleepy. The gold vintage cocktail dress was much admired, as was the jewelry (borrowed from the Armenian lovers). The twitter party proved louder and younger but no less packed. One more screwdriver later and I was officially knackered. Alex, Jack, and I quit at about 9:30 and headed homewards.

I meet some lovely people over the course of the day: the SF/F buyer for Barnes & Noble, the SF/F reviewer for the NY Times, one of the Smart Bitches, and similar luminaries. My mind is still a whirr and I’m utterly overwhelmed.

BEA Day Three
I was up early to pack and check out of the hotel, thus making it to the convention center with time to spare. There, unfortunately, I found my cell phone waiting for me, like some sort of evil gadget stalker. I took an hour to trot about photographing fashion, spotted some lovely little outfits and shocked people by insisting I was really only interested in their clothes. However I also encountered a weird carry over from ComiCon – booth babes (well, and booth stormtroopers and a booth Elvis) I turned into a delighted goofy fan-girl when I stumbled upon one of my favorite small press M/M erotica authors, Laura Baumbach, in residence tucked around a forgotten corner and scored a book from her publisher to read on the plane. (It turned out to be wonderfully sexy, by the way.) I also, finally, tracked Mark down at his booth, for a hug and a quick chat. People in NY don’t hug properly, it was nice to get a good squeeze after two days of cheek kisses and mild pats on the back. I made it back for a new round of 11 AM signings. There was a line. No really, a line of more than two people, for little old me! Wow. And a lovely lady I’d met the day before came over special to complain that my book kept her up until 3 AM the night before. Now that’s what I like to hear! Bring on the late nights – I can take them. Thanks to the smartbitches for this twitpic!

I briefly schmoozed with Tim and the Barnes & Noble rep one more time, they are both so adorable, what can I say? Then I had to scamper off late for lunch with Kristin, who gave me permission to stand her up anytime for the B&N rep. We had probably the most delicious fries I’ve ever eaten in my life and I got a salmon sandwich big enough to reserve half for the plane (my agent has magic great food location skills). I returned to the Orbit booth to quickly change and then it was out the door to the airport.

All in all it was a whirlwind trip but it was also beyond fantastically fun. From a professional summation standpoint, very few publishers were giving away galleys and there was a shocking absence of SF/F publishers. What this meant was that Orbit was unique and Soulless really stood out! All-in-all the general opinion seemed to be that things aren’t looking good for the industry in general, but here’s hoping my little offering brightens up people’s plane rides home.

If you haven’t had enough BEA yet, there’s a great blog report over on Babbling About Books.
I now return you to your regularly scheduled blogosphere.

Your Moment of Parasol
A man with an umbrella at BEA From Left to Right
1. Long and lean in flowing belted black with a hint of turquoise. 2. Beautiful slim-line ultra-modern suit worn with striped black and white shirt, no tie, and given a retro kick with a black fedora. 3. Matched ladies in black and white, little details like ruffled neckline, puffed sleeves, and chunky black beads for interest and pop. 4. Casual peach dress given a 1950’s vibe with cream cardigan and embellished ballet flats.
Your Tisane of Smart:
Great blog about costume flicks over at Enchanted Serenity Period Films
Your Writerly Tinctures:
Hot tip of the BEA: write Tim a fabulous, light & cheerful, Suburban Fantasy set in the 1950s. He was trying to get me to do it, but 1950 is not my time period.

Quote of the Day:
“I’d rather dive into a river of snot than wear crocks.”
~ VH1’s New Millennium 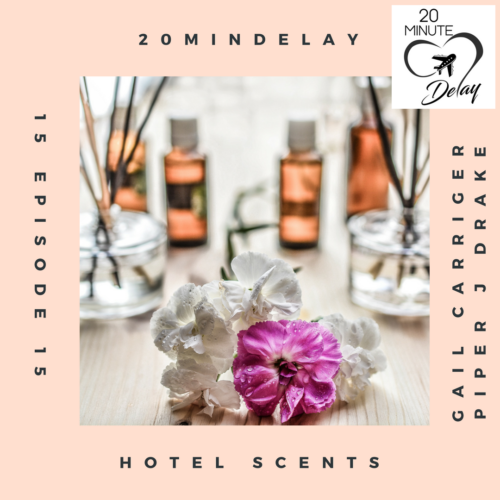