I received a question recently via email from the lovely Eva, which I thought so very intriguing others might enjoy my answer.

She asked for further detail on the new fashion for floating dresses I describe briefly in my second book, Changeless. 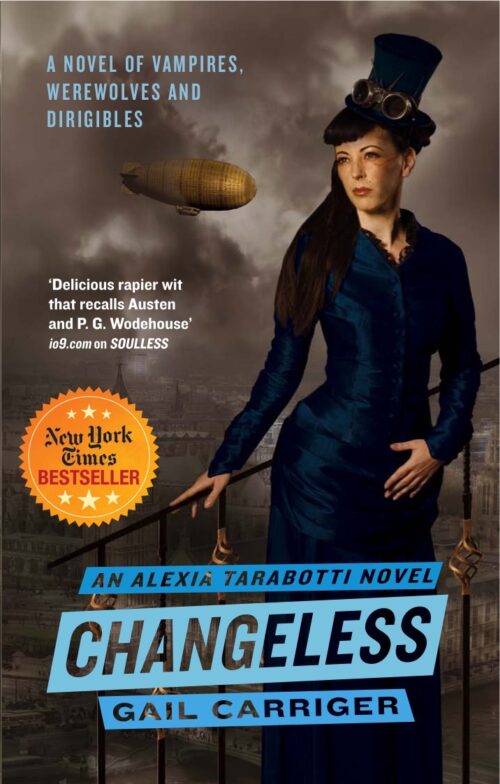 I will say that in the books I did leave this trend a little vague so it could be open to interpretation, and possibly cosplay, but I imagine floating dressed as having several features. First, they would probably lean towards the Natural Form style of the late 1870s. In fact, in my world, dirigible travel lead to the popularity of such a dress style because one’s skirts were less likely to fly up if they were closer to the body. They came over from Paris sooner and lasted longer than in the real 1870s.

I imagine leaded weights (like those used in curtains), heavy chain (like those in early Channel suits), wire, or some kind of buckshot might be sewn into or onto the hem of the bottom skirt of a floating dress to keep the garment from flying up and exposing legs to view (gasp!). These could be quite decorative and showy if affixed to the outside: metal beads/buttons might look very nice. Such an emphasis on the hem would be most unusual for the time period and specific to floating dresses as opposed any other kind of daywear. There would be very filmy and floaty ruffles/bows/rosettes sewn to the top skirts, sleeves, or in a waterfall effect down the back of the bustle, to flutter in the wind becomingly.

The tapes of which I write are based on dress elevators of the turn of the century, although with the reverse in mind. They would have been worn over the skirt, possibly attached to a belt and then strapped to the ankle, or the weighted hem of the bottom skirt to keep things from shifting about in the wind.

So there it is, the floating dress as I see it. Of course, like much else in a book the physical reality is open to interpretation. I wouldn’t be much of an author if I strapped you down with my imagination and didn’t let yours float about on the aether breezes.

Quote of the Day:
“For all my longer works, for example novels, I write chapter outlines so I can have the pleasure of departing from them later on.”
~ Garth Nix