I’m late posting today, Gentle Reader, for which I apologize.

I lost my writing time yesterday and felt guilty enough to move my normal timing around and write early today to ensure productivity. Of course, I should have done double, but I’m a word count wimp. I believe I now think daily in 2000 word chunks.

Anyway, you want to hear more about Comic Con? Right, here we go.

Saturday was steampunk invasion day. Well, I thought if it that way because the Starburner awards were to take place outside on the balcony that afternoon.

I got up and dutifully had my swim and soak. This was getting harder and harder to do as the convention progressed, which only meant it was more necessary. (The AB asked upon my return, “Was KB there?”) After a delicious egg white omelet from the buffet (my new favorite way to start any convention day) it was time to get dressed. I laced myself into a modified version of the teaspoons corset outfit. Modified for packing and heat reasons. 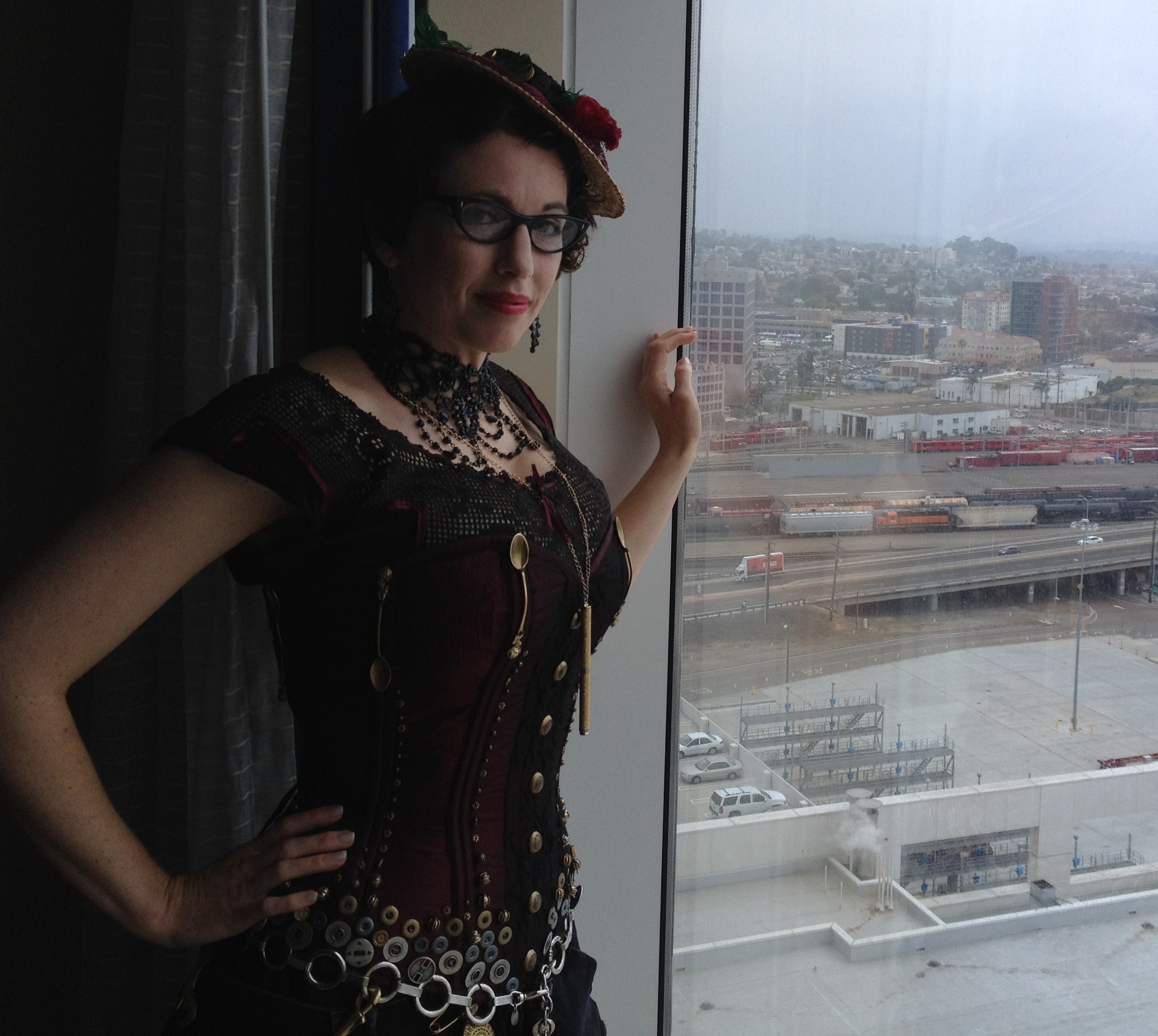 Now familiar with the secret back entrance to Comic Con, the AB and I arrived at the steampunk gathering on the Mezzanine Level well before noon. It was kind of hilarious to walk the gauntlet along the waterfront where miles and miles of people in line for Hall H wound over hill and dale. It meant we literally walked along, with the line facing one way on one side, and the other way on the the other side, for about 3 city blocks. People snapped photos of us the whole time. With the AB in top hat and boots and me with my parasol and corset, our posture sublimely correct, we did feel exactly as the Guild so aptly called us steampunkers, “. . . the Eurotrash of nerd-dom.” 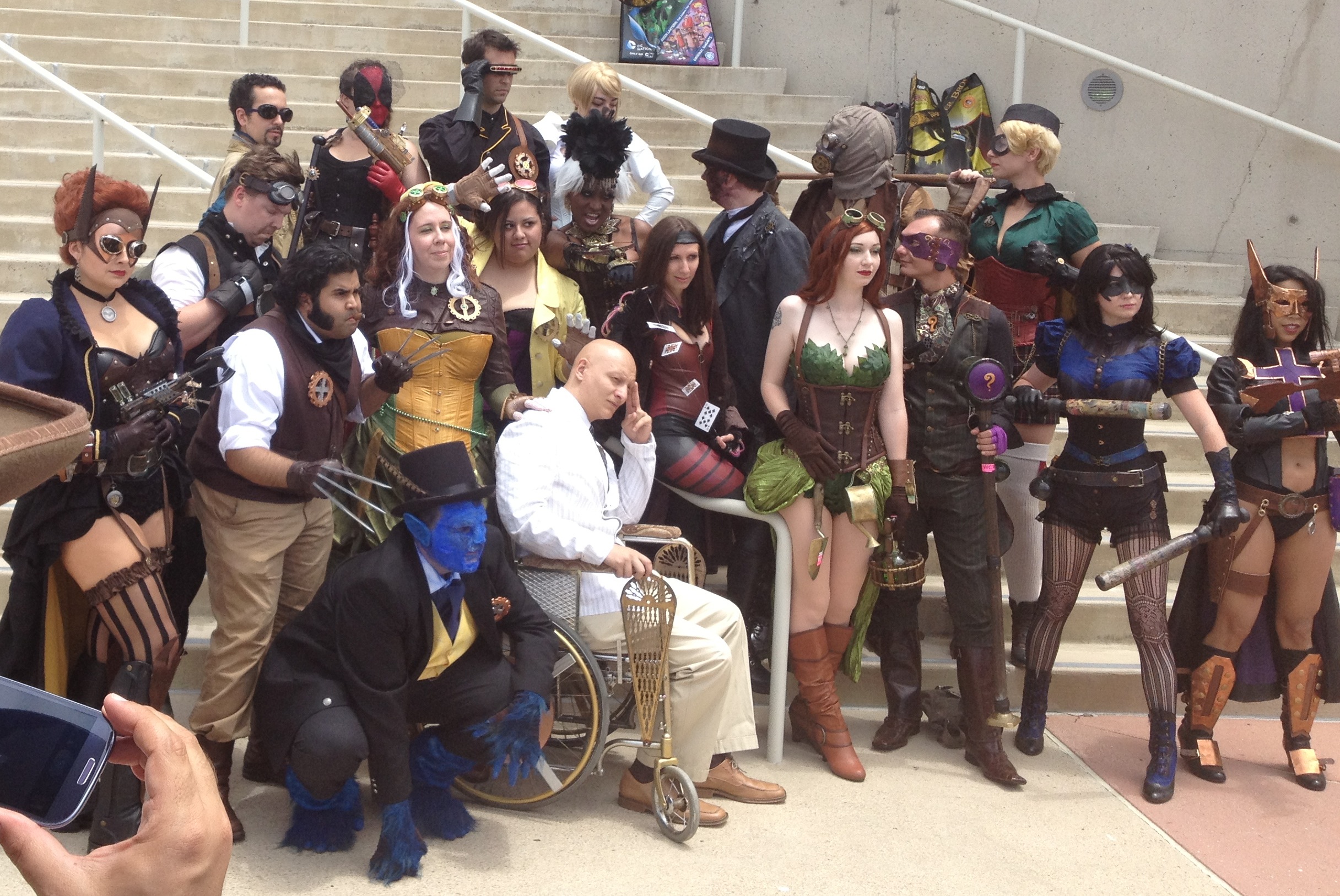 Once arrived, it was beyond fun simply to mill about with friends, old and new, in the steampunk community. It was like finding my tribe among the crazy thousands that were there for the con. Many of them I’d met several times before at other steampunk events, some only that morning on the panel. 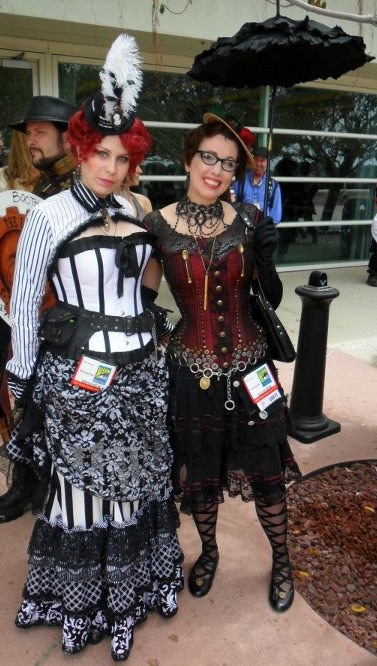 To my genuine surprise, after we had assembled for a mass photo, I was called down and awarded a Annual Starburner Galactic Courier Award for contributions to the steampunk community. I was, and am, quite honored. I might even have come over sentimental. It was a wonderful way to start the day. 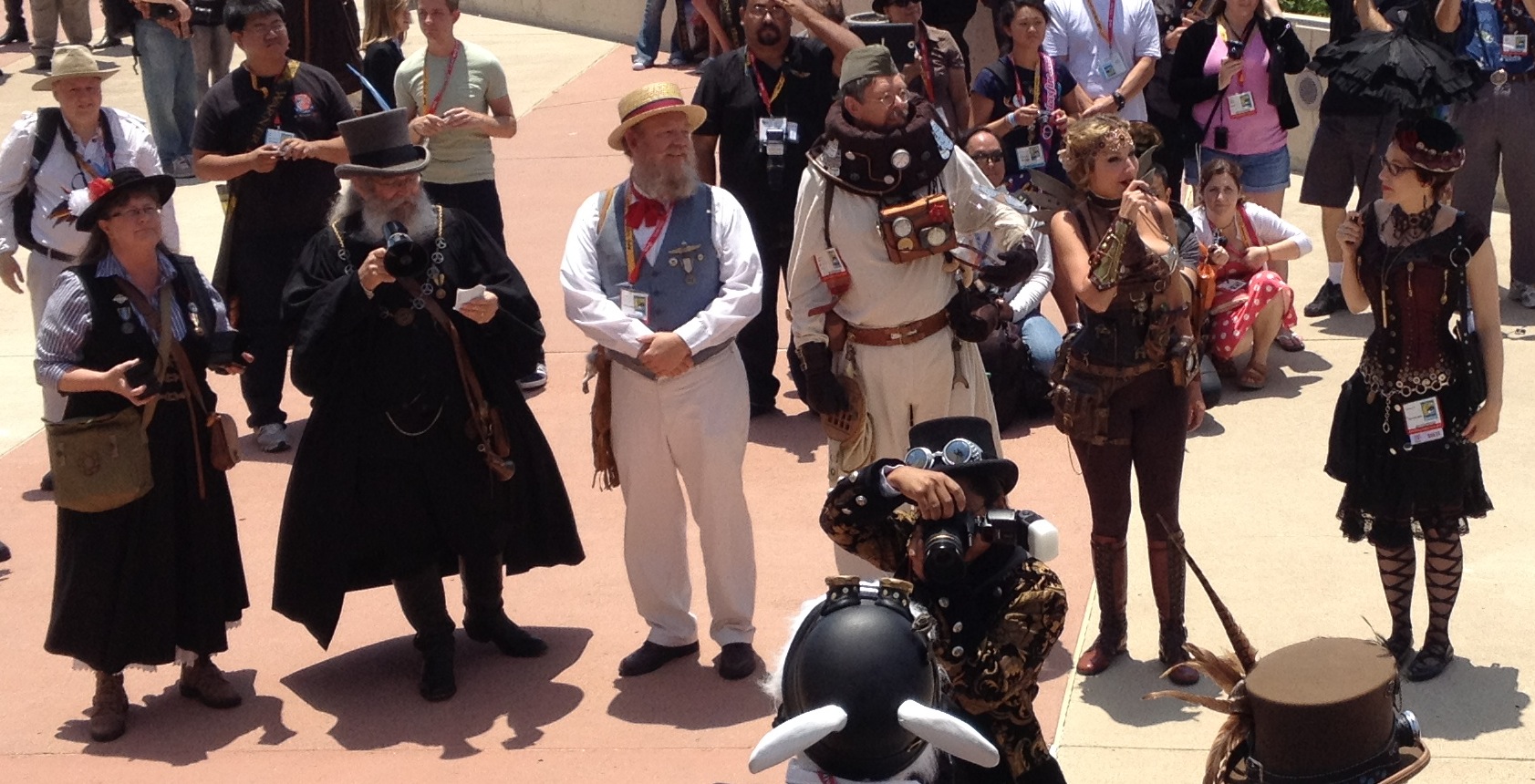 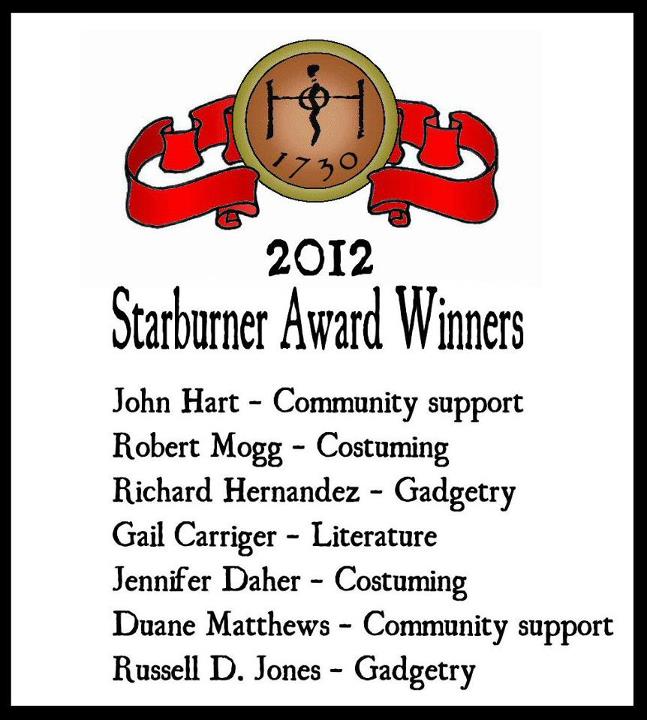 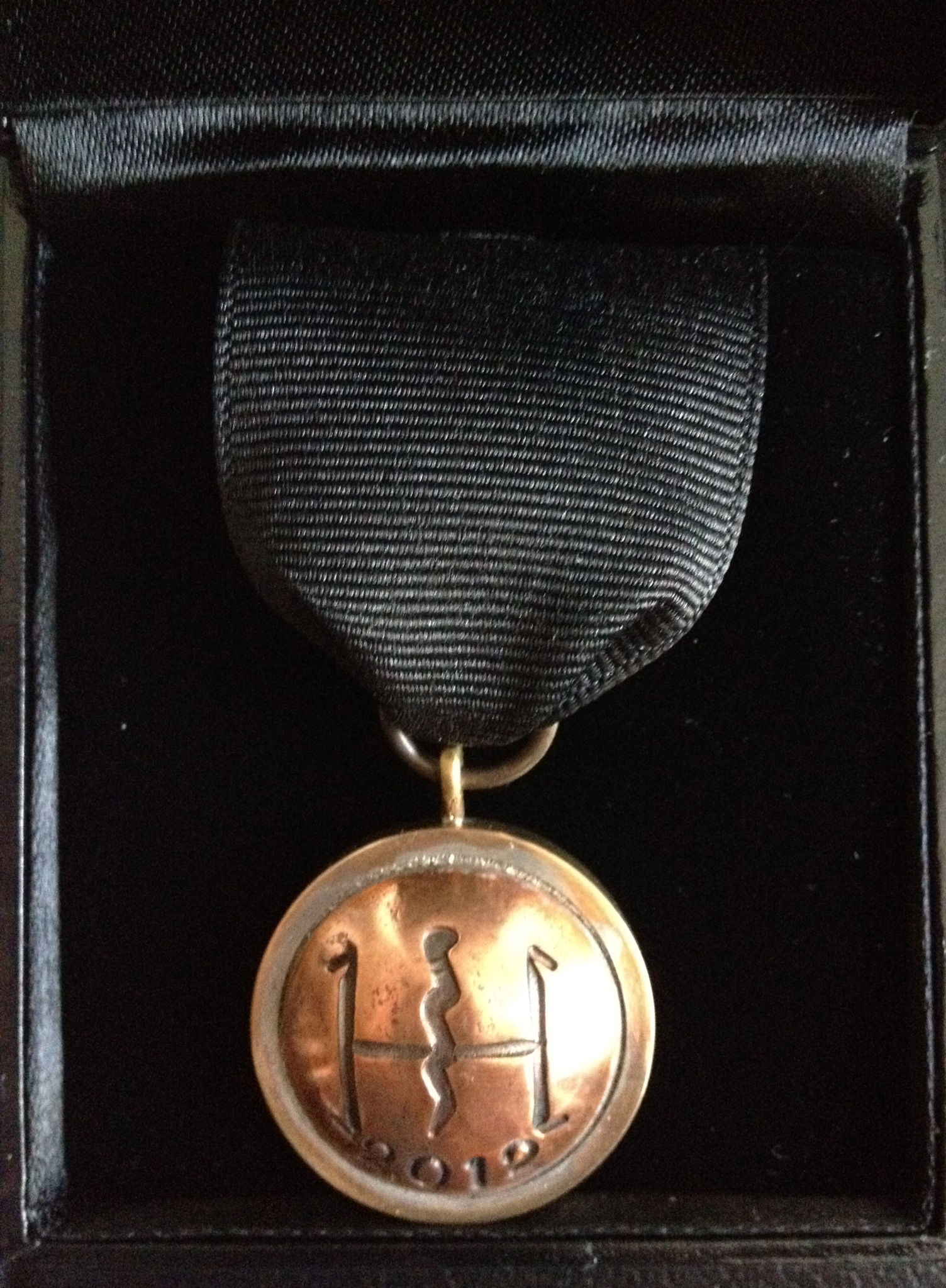 Then I had the pleasure of meeting Bruce Boxleitner and the team behind the forthcoming Lantern City. Which sounds like a fun steampunk project. 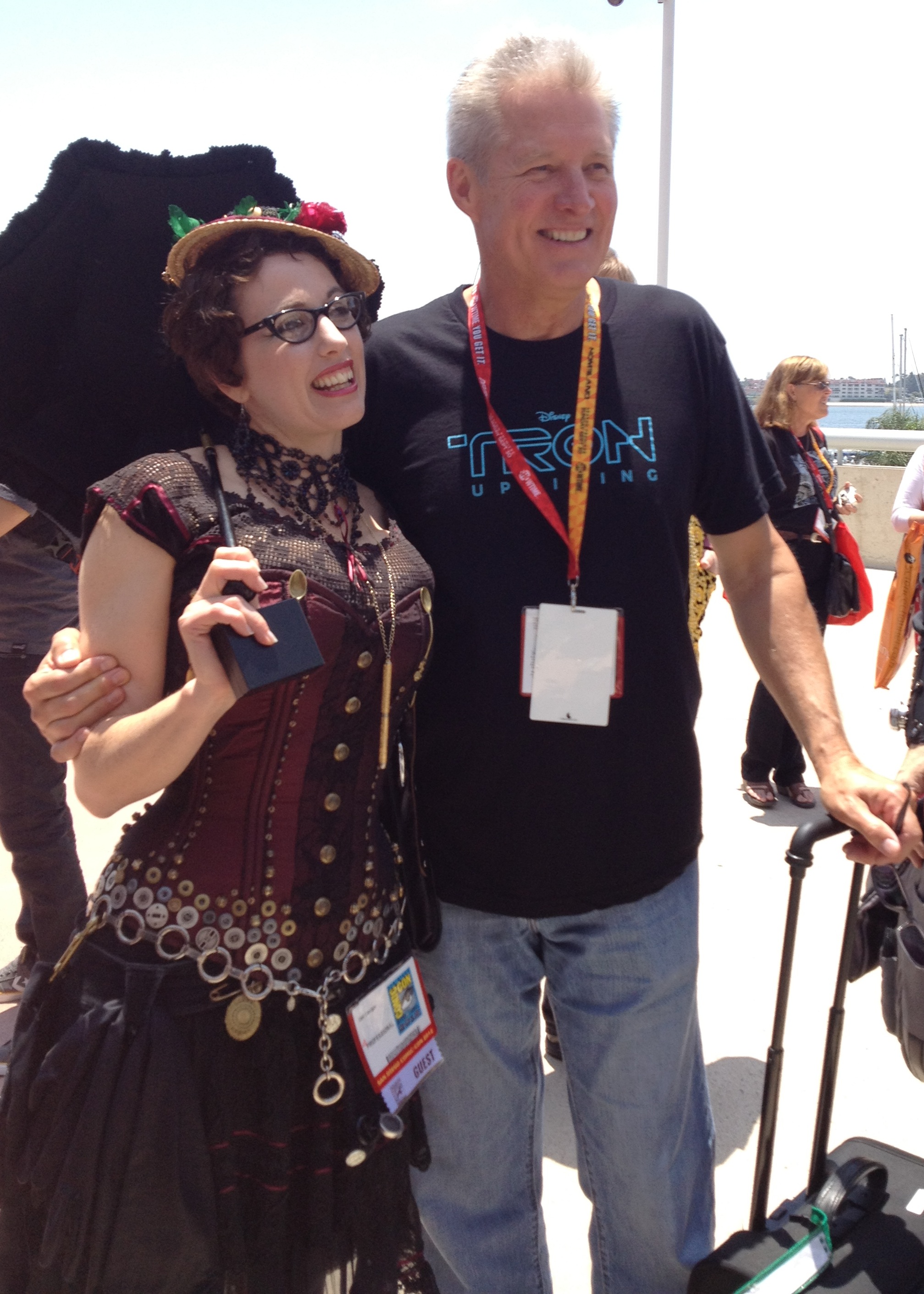 It was a little comical, and highlights what a bad geek I am. Please understand, I’m primarily a reader and a writer of SF/F not a watcher (with a few notable exceptions), so present me with Tamara Pierce and I go all gaga, but film stars don’t really overcome me. So Bruce Boxleitner and I have a brief chat, and then the following incident occurred as I walked away with the AB, hurrying to make my Spotlight panel . . .

I am a bad bad geek.

Next up was my Spotlight on Gail Carriger panel. I was so nervous. It’s Comic Con and with a million other competing events I thought no one would come to mine.

I was wrong! Oh my, I was honored, so many people turned up. I don’t care if some of them were there for the panel after, they sat through mine, and laughed in all the right places which is all I can ask for in life. I bounced about demonstrating my awesome parasol while the room got settled and then Kristin and I chatted. 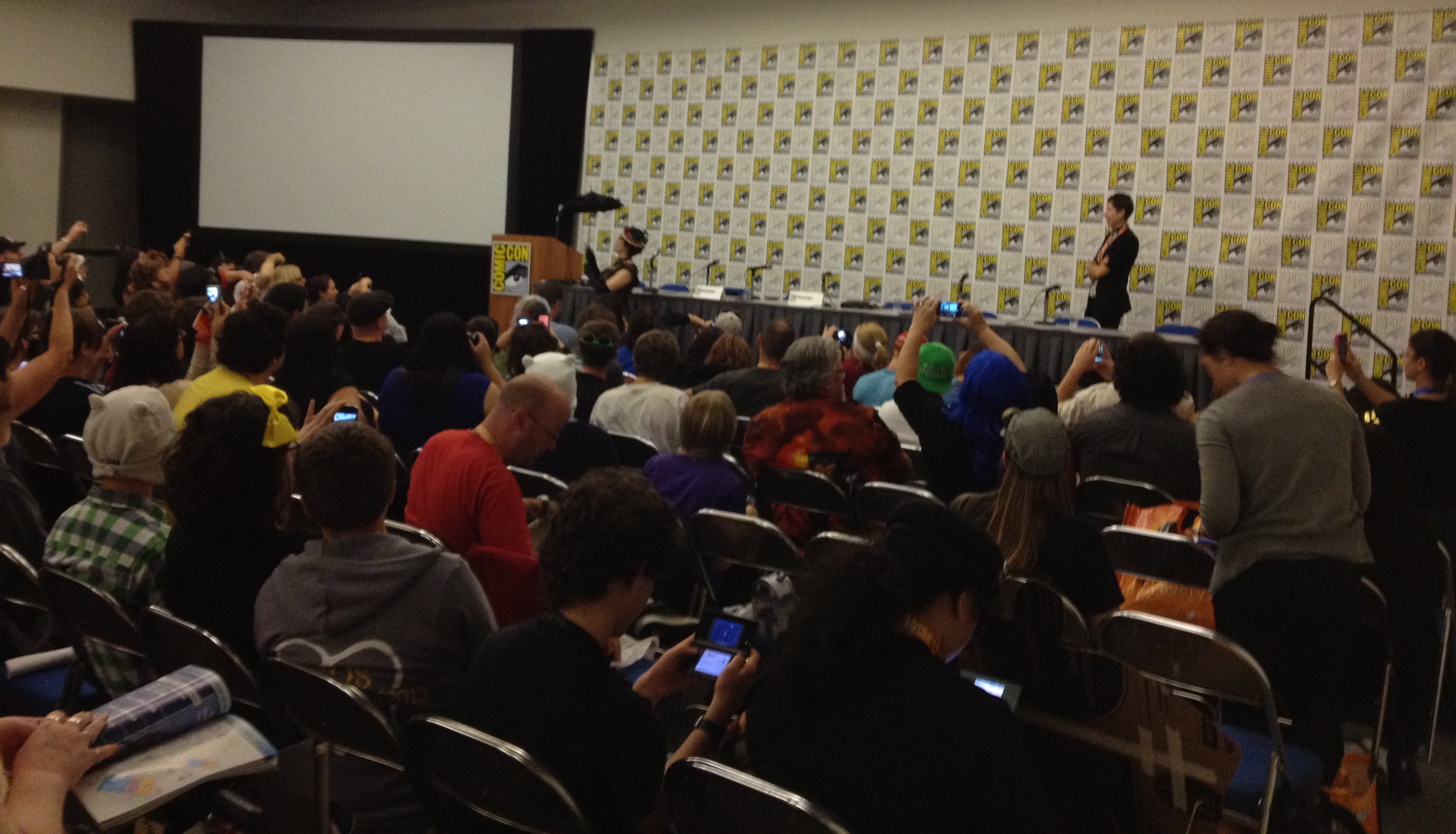 We discuss breaking into publishing, and how she had once rejected me (for a different book) years before I became her client. We talked about converting a novel into a manga, writing steampunk, drinking tea, and the importance of octopuses. We made the big film option announcement and then had a little Q&A. Kristen was well prepared and I hope people enjoyed seeing the author/agent dynamic. I really had fun. All my nerves were for naught. 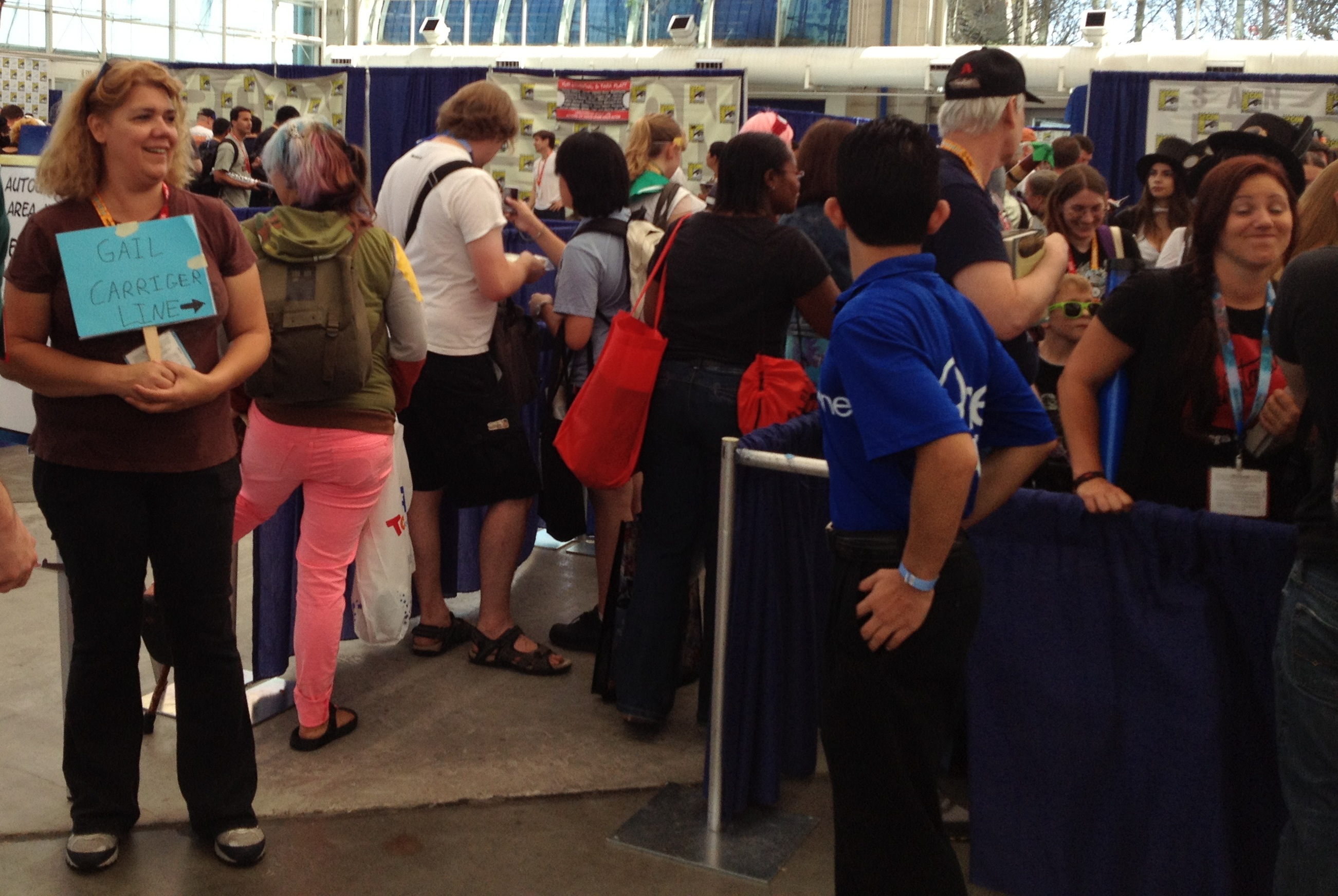 Then I dashed off for my signing and had a gratifying line and no pause for the next hour or so. You, my Gentle Readers, are too good to me. Knowing there were so many things you could see and yet having you come and stand for ages just so I could sign a book was an honor. Really. It made my convention. And so many familiar faces from my previous visits to San Diego and LA. 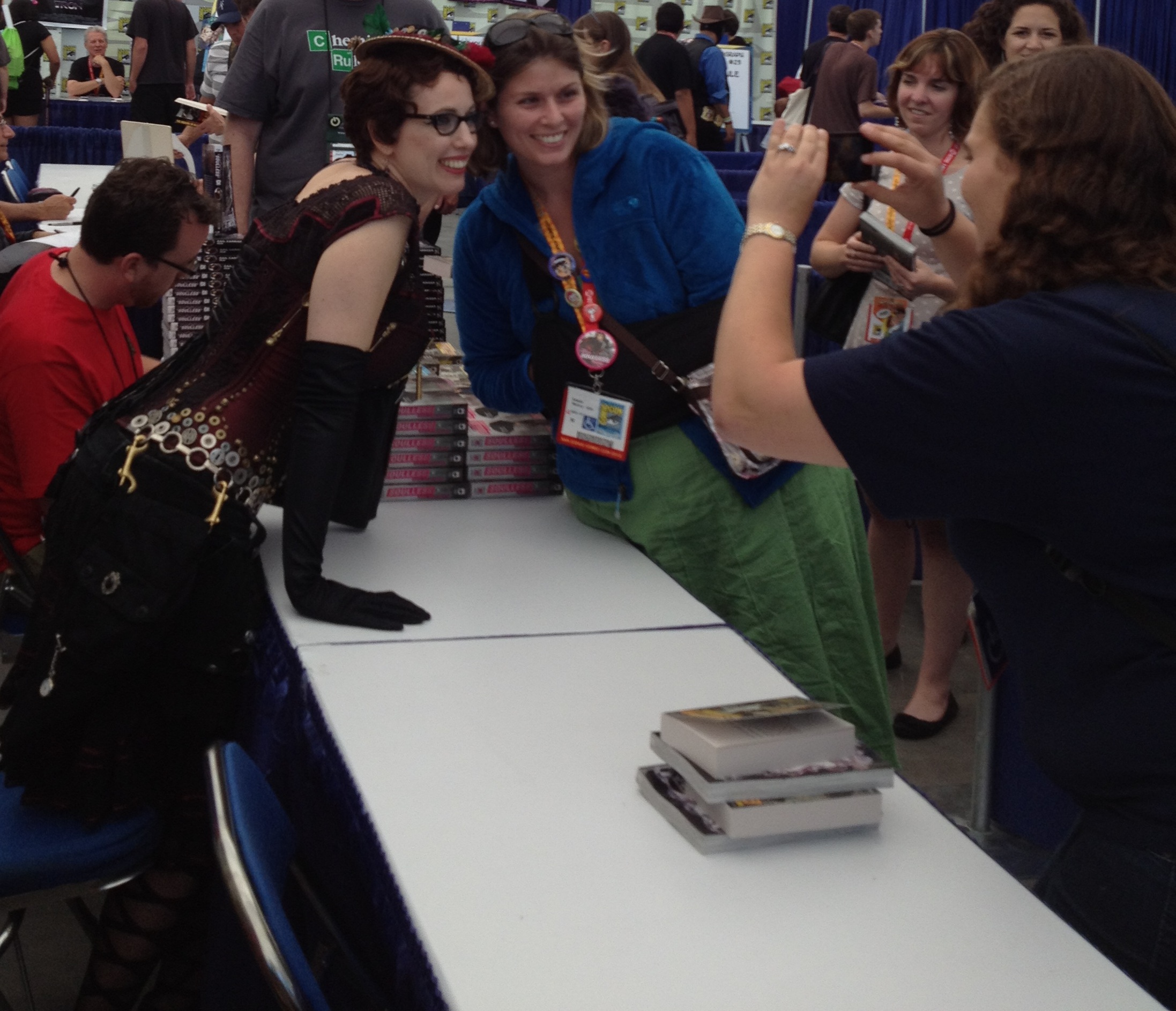 Mysterious Galaxy Books handled the line with their usual aplomb. This fabulous indy in LA (Redondo Beach) and San Diego has a fanatical (and well deserved) following. If you are local to either area you should make it a point to visit them. They are great people, very knowledgeable in the genre, super supportive of authors, involved in their local SF/F community, and tapped in to events in the area. Good people to know, when you’re a geek, if you ask me. And, one of their minions commented that I had the politest fans at the con. I’m so proud! 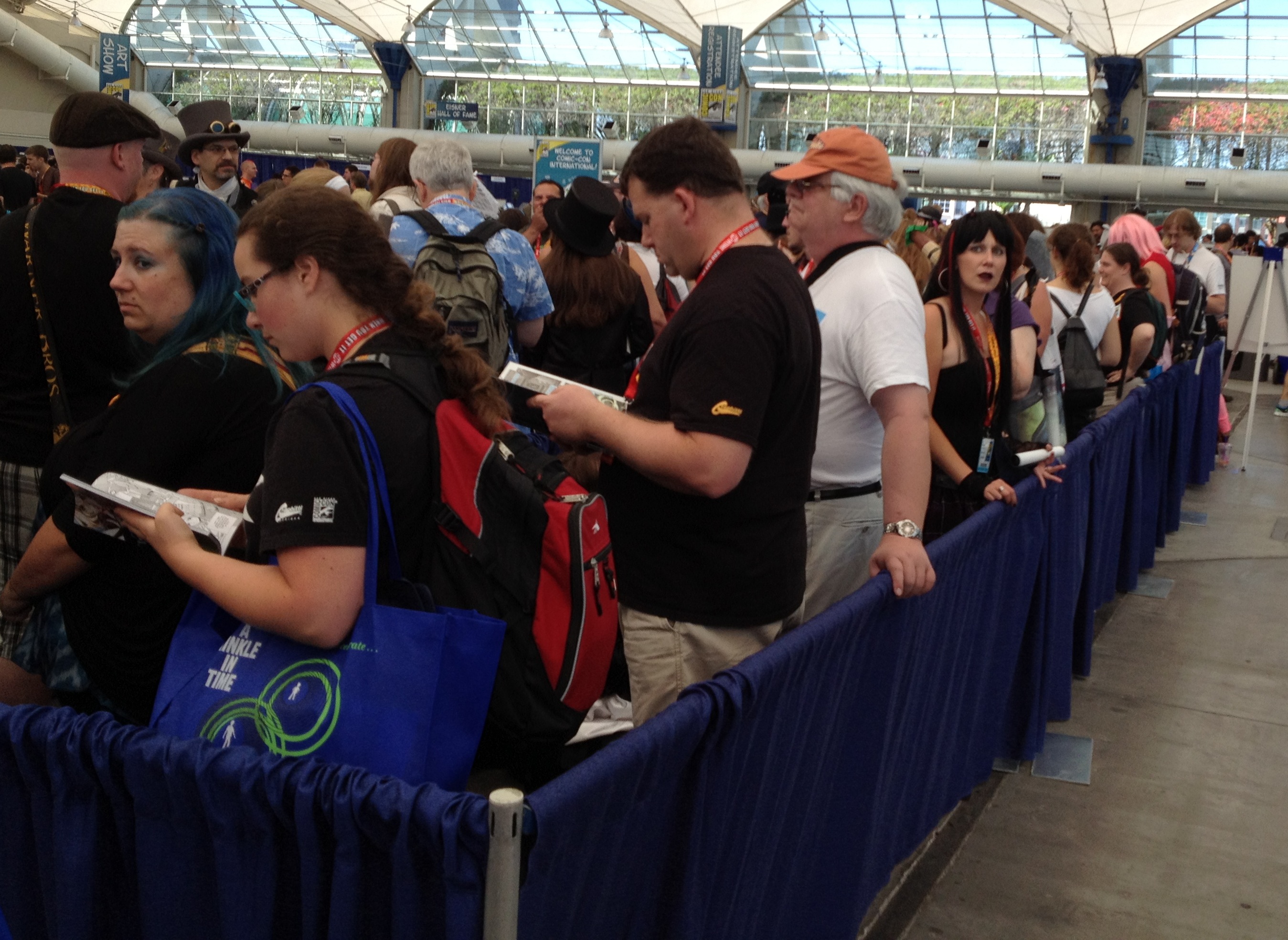 I was given lovely trinkets, including a knitted pair of mitts. 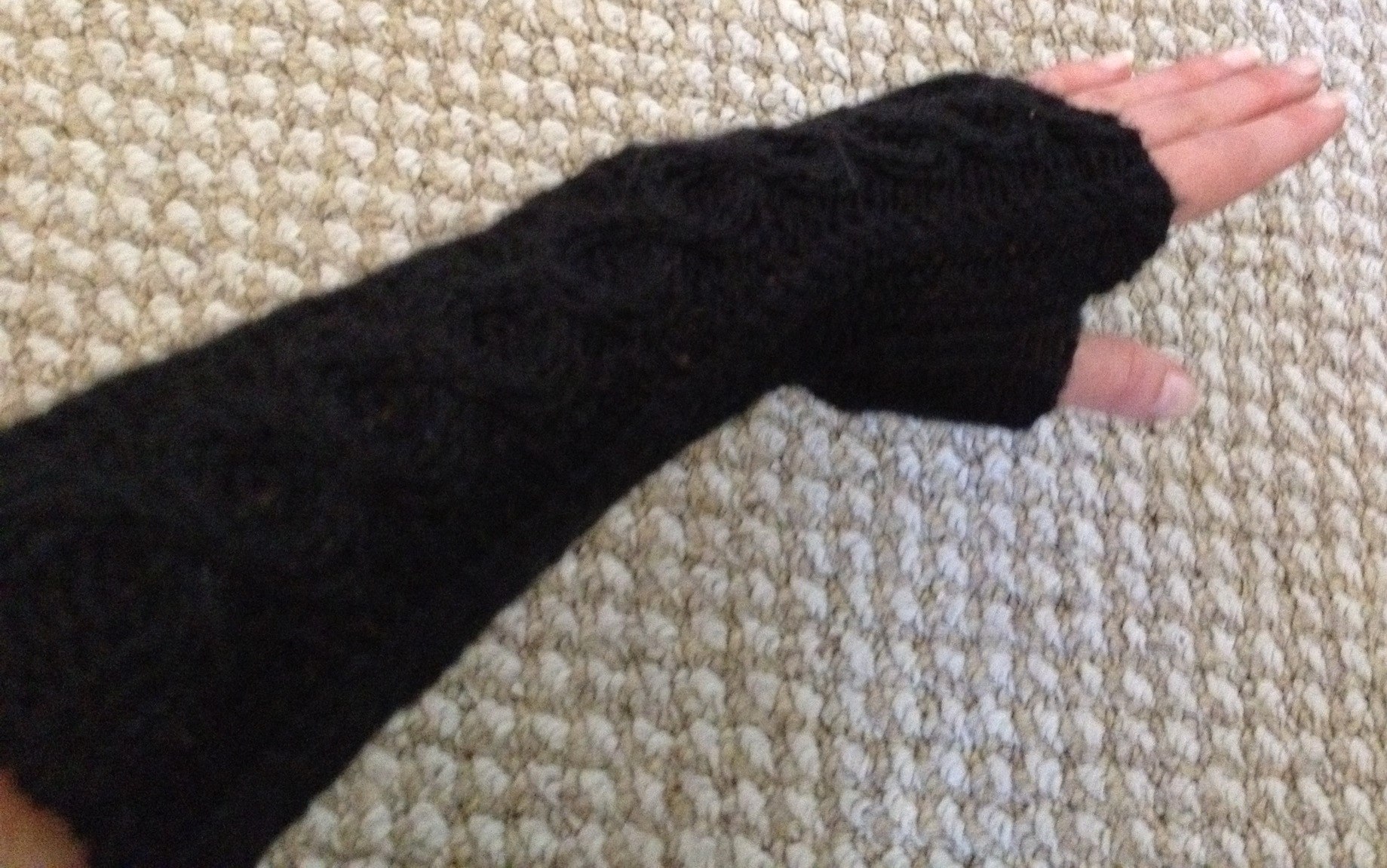 After that, I had an interview with Katie of Bookyurt. Like the last time we met, at RT, we shot a little video outside. This one without so much wind noise, I hope. I’ll let you know when in drops.

I then dashed back to my hotel room, had a nibble and changed out of the steampunk garb for the evening. I had a fan tweet up. Just so you know, Gentle Reader, I try to do this whenever I travel, particularly if the convention is expensive and/or there is no kaffeklutch. I want people to be able to meet me, and I like a nice casual venue. As a reader, I always enjoyed meting my favorite authors this way, so I do my best to make time in my schedule for tweet-ups. This one was at Sweet Things Frozen Yogurt and made for a yummy pause to the evening. About 10 ladies turned up and we chatted and nibbled and then took photos. I had a great time, I always feel I get to know my readers so much better this way. Since the AB was off at a baby shower, I’ve no pictures of my own of this event. I hope some will turn up on Facebook eventually.

Original plans for that night included party hopping with my old author chum Dave Williams. But he was off having dinner with his publisher and I had an invite to a party on a yacht. Don’t ask. Having never been on a yacht, I dragged Mike Lee along with me and paid a yacht call. Couldn’t stay long because Bruce Boxleitner and his Lantern City team wanted to go eat Mexican, and would Thomas Willeford and I like to join them? Why yes, we would.

On the way out, who did I run into but Chris Hardwick. I might have had my one and only Comic Con fan girl moment. Yes, I went to dinner with Bruce Boxleitner, had a hot tub next to Kevin Bacon (thank goodness I was wearing my best Marilyn Monroe swimsuit), nearly tripped over Seth Green, and caught Jason Mews viewing bat-mobiles. Sure, Six and Anders are just as inhumanly hot in real life. Yes, the Firefly team was beyond cute. But I love the Nerdist. I. Love. It. 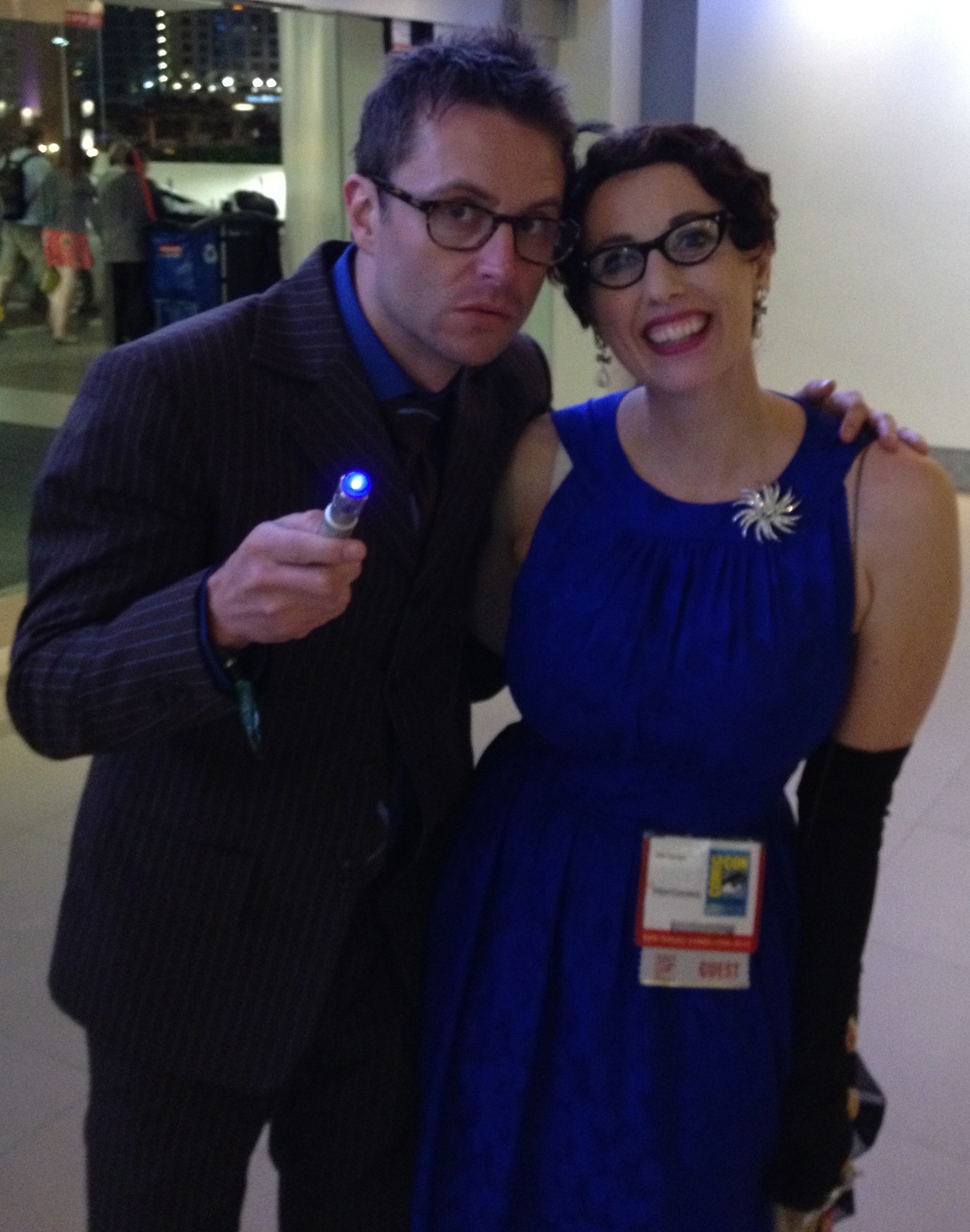 Podcasting is the geekdom I acquired as an adult. As a kid, I was a nerdy reader, a ST:TNG and Dr. Who watcher, and lover of all things fantasy. But as an adult I love podcasts. I am possibly addicted to them. It’s California, I drive a lot. And, with the possible exception of the GeeksOn boys (curse me for not knowing about their Comic Con meet up until after) the Nerdest boys are kings of my podcast-loving withered old heart. So, yes, there might have been a breathy, “Can I get a photo with you?” And then a nervous inability to strike up a conversation as Chris Hardwick and his gorgeous date waited for a taxi behind me.

So, with agent in tow, I took a San Diego Taxi of Doom out to a Mexican restaurant to eat dinner with the Captain of Babylon 5. We had fun talking concepts, steampunk, and characterization over fish tacos and horchatta. 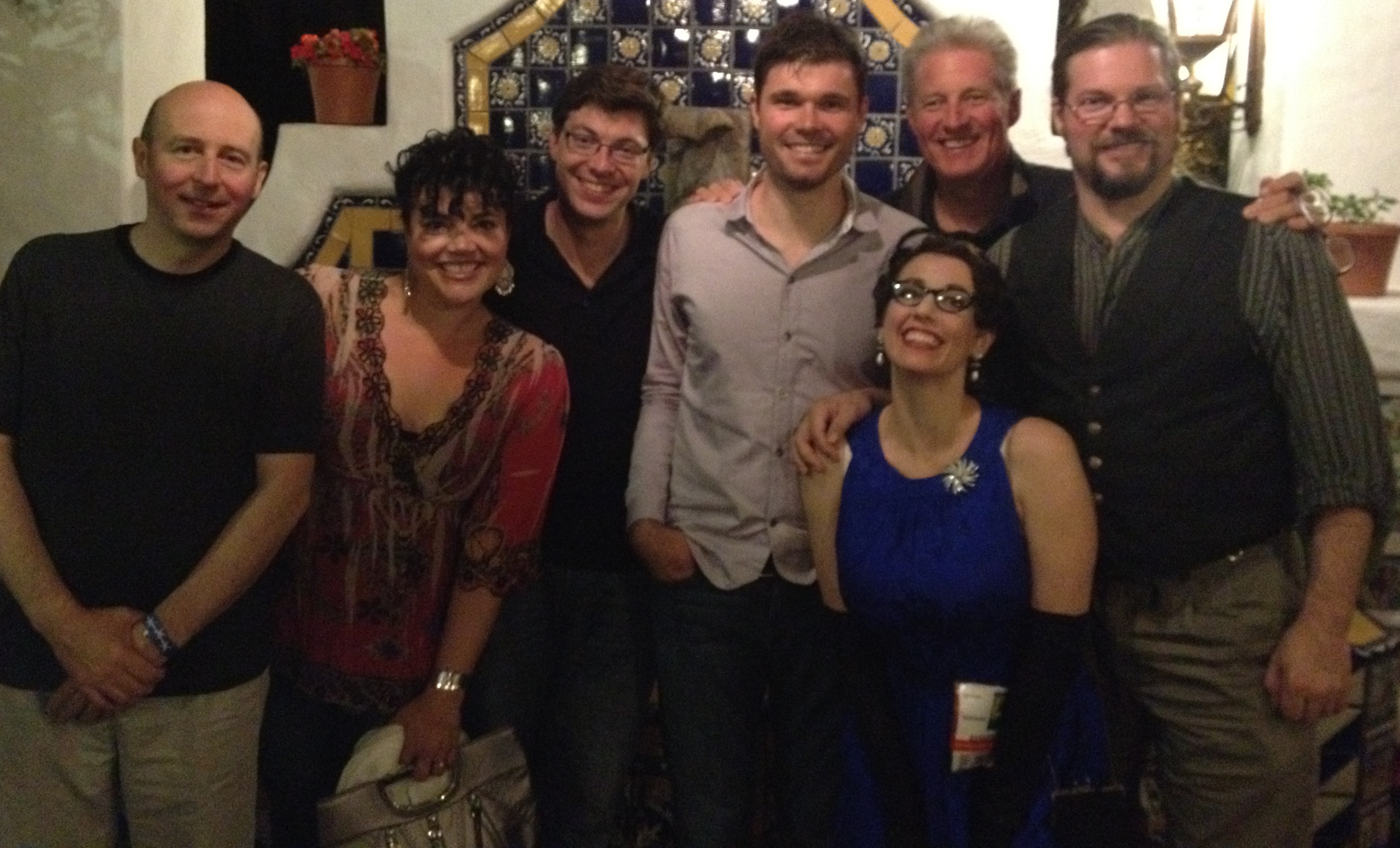 After another epic taxi battle later, and I arrived back at the hotel quite late baring an extra fish taco with lots to tell the AB. After handing the hungry AB the food and relaying garbled details of dinner . . . 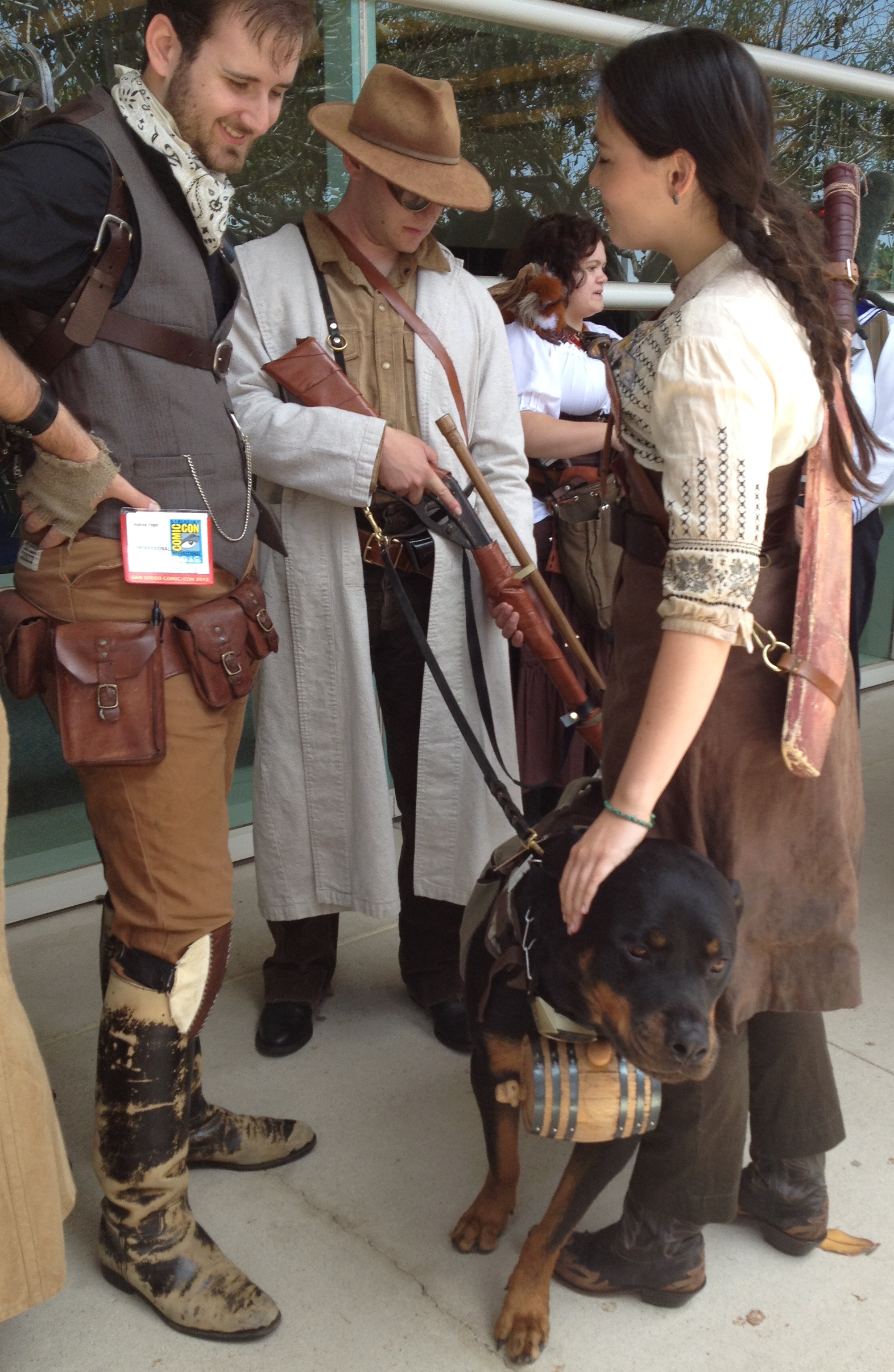 Your Writerly Tinctures . . .
12 tips for getting book reviews

Book News:
New interview up at Strange and Random Happenstance

Quote of the Day:
“In the 1880s it was not considered correct to leave cards when a hostess was found at home; when a married woman called upon another married woman but found her out, she always left three cards: one of her own (for the wife), and two of her husband’s (one for the husband and one for the wife). If the hostess was either unmarried of widowed, only one of her husbands cards would be left. A bachelor, or a married man calling without his wife on a married couple would leave two of his cards. However, a lady never left her card for a man, and a married man never left his wife’s card.”
~ Katie Hickman