Today, Gentle Reader, I have an interview with the lovely Lev.

His book, All Men Of Genius, is a kind of Twelfth Night meets steampunk meets Oscar Wilde. Cross dressing, ho!

He and I also went to the same undergraduate university. Odd, I know. 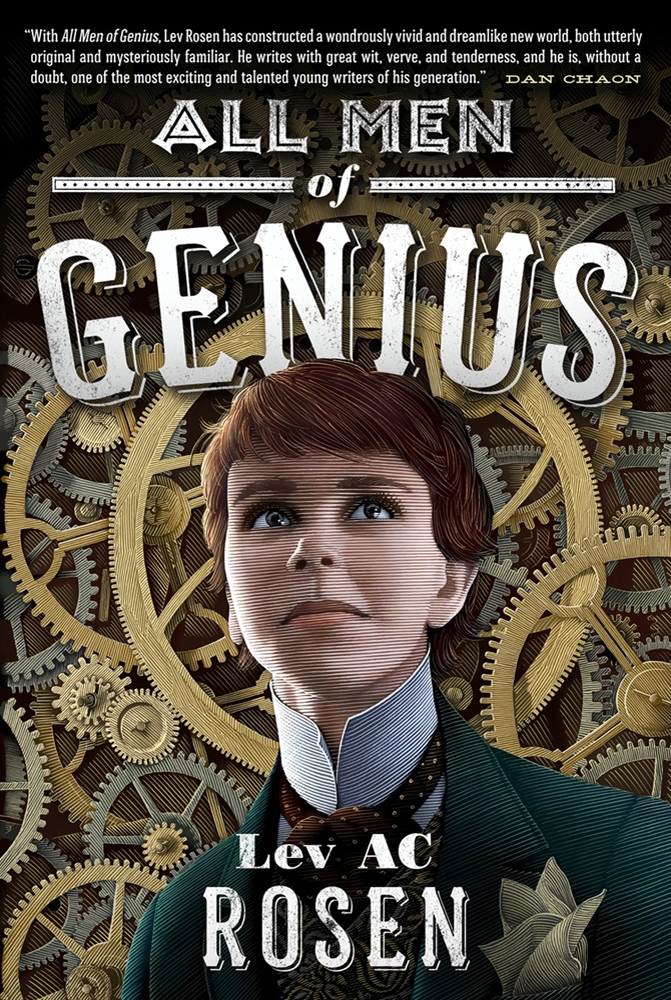 About you, the Author Lev AC Rosen

Tea or coffee and how do you take it?
Hot chocolate! One should always indulge. No marshmallows, whipped cream if I’m feeling naughty. The darker and less artificially sweetened, the better. It should be both sweet and bitter.
*Gail interjects: you must try Mountain Man’s cocoa blend, it is marvelous.*

Describe your personal style for author appearances.
It depends on the venue. If it’s a library or bookshop, I’ll dress fairly plainly, collared shirt, tie, etc. But I’ll try to pick a tie with gears or bees or something I feel relates back to the community. For steampunk appearances, sadly, it depends on the weather. If it’s cold, I have the Oscar Wilde fur trimmed coat (which is actually from the 1970s, but it passes) that I wear in my author photo. If it’s warm I shouldn’t be out anyway. I hate to sweat. But I do have an astounding vest my friend Kate made for me, the back is a Beardsley-esq print of black and white flowers on a gold background and the front is chartreuse with brown dotted lines. On the back, also, are chains for tightening it, instead of the usual fabric. It goes splendidly with my brown plaid trousers. Alas, Kate moved to Egypt, and so I can no longer employ her as my personal tailor. Sadly, I don’t have any photos of myself in the vest, but I have a few photos of it just laying about, as waistcoats are wont to do. 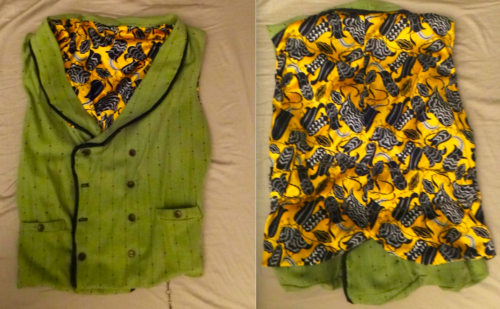 If I were to observe the writer beast in its native environment, what surprising thing might I see? What does the environment look like?
I’m very often in just my underthings, which may be surprising, or maybe not, depending on how well you know me and how you got in there in the first place. As for the environment, I have an office/library – not very big, but it has plenty of books, a desk covered in papers, bulletin boards also covered in papers and some little items I’m particularly proud of, like my mid-1800s medical slides. I had them framed with a glass back and some rivets, to really bring out the vintage medical creepiness of them. Up close, each slide has a sample, with a handwritten label. Sadly, whenever I try to take a close up, all I get is my reflection.
*Gail interjects: Of you in your underthings? Because I think most of my readers would enjoy that.*

And also this wonderful postcard I found of pinned butterflies, which I put in a little wooden frame.

If you drive, what do you drive?
I live in Manhattan. I do not drive. I take the subway. I like to think back to the times when the Subway first opened and City Hall station had a chandelier and a grand piano that someone would play and people would dress to ride the subway. If I close my eyes while riding it, I can almost imagine I’m back there. But failing that (usually due to a smell), it’s a good place to read.

No deviating: vanilla or chocolate ice cream on a plain or a sugar cone? (Gail will use this to determine your level of sanity.)
Hmmm… if we’re talking no toppings or anything mixed in, then chocolate in a sugar cone (see the above note, regarding indulgence). But if I can add other things to the mix, I think vanilla is better for showcasing candy, sprinkles, and so forth. Especially if peanut butter cups are somehow involved. Which they would be, if I had any say in the matter.
*Gail pronounces you entirely sane.*

What’s most likely to make you laugh?
I’m very proud to say that I laugh easily and often. Most often at general wackiness, or perhaps a particularly piercing zinger (directed at someone who can take it). I do not laugh at awkwardness. I know many people who do, but it just makes me so uncomfortable. I like it when the people I’m laughing at are laughing too, and for the same reason. But I’ll laugh at almost anything otherwise. Swearing rabbits, cats that don’t quite reach what they’re leaping for, children dressed in animal costumes who are clearly displeased with the costumer. I could go on.

Since writers inevitably end up in the bar, what’s your poison?
I like a Jack Rose. Sadly, they’re hard to find, as many bars don’t keep AppleJack in stock year round, but this is the time of year when I can find them! I also love the Honey Jack Daniels they have out around now, mixed with ginger-ale. I think I’m an autumnal drinker. 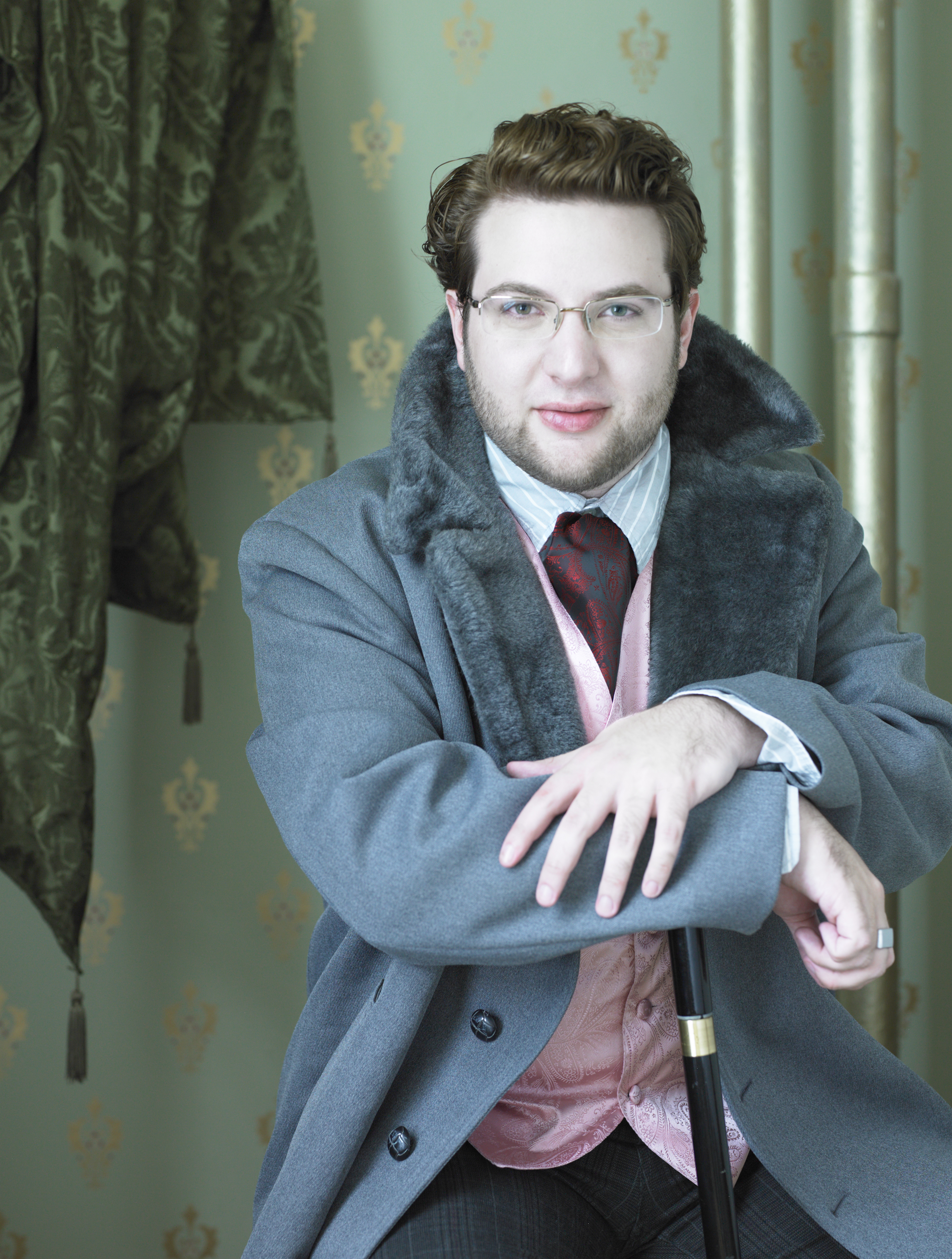 LEV AC ROSEN grew up in Manhattan. He attended Oberlin College (and, like Gail, immediately fled back to civilization afterwards) and received his MFA in creative writing from Sarah Lawrence. His work has been featured in Esopus Magazine, Tor.com, booklifenow.com and numerous other blogs and webzines. He is addicted to cardigans, and sees nothing wrong with owning one in every color – that’s every color, not just the seven you’re thinking of. He only just got married a few weeks ago, and lives in lower Manhattan with his husband, who is just as insane as he is, though probably more stylish.

What should readers eat while consuming your novel?
Hmmm… I think it’s probably best enjoyed around sunset or just before, with a cocktail made of lemonade and St. Germain, with frozen sliced cucumbers for ice cubes. Along with that, perhaps some cucumber sandwiches, and scones. Frosted ones. I like the pumpkin scones with maple frosting, which again, are found only this time of year.

What form does evil take within its pages?
Well, I don’t want to give away too much of my book, All Men of Genius, but there are a number of unpleasant people; Violet dresses as a boy to enter London’s most prestigious school of mad scientists, and one of her fellow students, Malcolm Volio is just awful, but perhaps not as awful as the Astronomy Professor, Bracknell, who bullies his students (it’s inspired by 12th Night and The Importance of Being Earnest). But perhaps most unsettling are the strange mechanical automatons in the labyrinthine basement. They have claws and seem strikingly familiar looking…
But the real evil, of course, is the society which excludes Violet from Illyria College because of her sex.

Which one of your characters would you most want to kiss and why?
I think the secret to being a good writer is wanting to kiss all your characters, even (or especially) the naughty ones. So, Violet of course, and Ernest (because yum), but most especially Fiona and Miriam. Fiona for her outrageousness and because you know the kissing would be good, and Miriam because she’s just so interesting and deserves the kissing, although I suspect she’d perhaps ask me not too. Jack would also be a good kisser, and Ashton and Anthony… the options are endless.

What’s your favorite period in history and does it influence your world building?
I love the late 1800s – Wilde’s period. I’ve studied Wilde extensively and the book, obviously, is heavily influenced by it – a Steampunk Wilde. I love that this was the time when all the science of the Victorian Era had gone from being “just developed” to more commonplace, and so people were asking “what next?” were theorizing all sorts of amazing mad science. Dandies and Aesthetes were in bloom, women were seeking specialized doctors to relieve their “hysteria.” And the bustle was fluctuating wildly in size, which I imagine must have been very amusing.

Which one of your characters would you most like to slap and why?
Oh I don’t think any of them should be slapped. Except maybe Bracknell. And Volio. And Ernest, sometimes, but in a loving, “snap out of it” way.

Without spoilers, what’s the funnest (or funniest) part of the book?
Everyone tells me its Oscar, the rabbit who Jack performs an experiment on, switching his vocal chords with that of a parrot brought back from South America by sailors with some very… salty language. After the switch, Oscar, grey and white and lop eared, develops the ability to speak, but only very rude phrases, many of which he proclaims at incredibly inopportune times.

If your story smelled of something, what would that be?
Dahlias, Violets, warm bronze, cigar smoke, grease and the lingering mossy smell of old basements. Quite a mix, I know. I dabble in cologne making, in fact (and All Men of Genius features a perfume maker), and have been meaning to blog about what scents each of my characters would wear. So stay tuned for that. Perhaps you and I should have a day of perfume-mixing fun, Gail! The only downside is that everything should be tested on the skin, and so afterwards you may smell… confusing.
*Gail whoheartedly supports this idea although he would like to add that she always prefers to smell like food.*

All Men of Genius was an Amazon Best of the month, on over a dozen best of the year lists, and has been nominated for multiple awards.  Publisher’s Weekly says it “puts a steampunk spin on the Victorian comedy of manners while sneakily critiquing the gender biases of both genres.” It is available now in paperback.

Your Writerly Tinctures . . .
10 More Lies You Might Tell Yourself While Editing

Book News:
Did you see? Rough draft of Prudence is done! Yes!

Quote of the Day:
“Finally, he should not say the kettle is boiling when it is not. This is an inexcusable offense, but universal.”
~ Steel & Gardiner, 1888