So it was that armed with crepe diagnostics and pink toilet paper we journey on through France to St. Malo and the Etonnants Voyageurs Book Festival. Let me tell you, Gentle Reader, things are a mite different at French book fairs.

Here I am on top of the tower of the old town pointing down at the white tents of the book fair.

So, as you can tell part of the fair took place in big tents, the rest was in the big stone building near by or a hotel a little down the way. So far as I could gather from the interwebs, Etonnants Voyageurs started as a travel book festival and has evolved from there. Thus, to me, it felt a little more like a baby BEA or ALA than my normal SF/F only stomping grounds. It was rather fun to be on panels with main stream and mystery writers, for example. 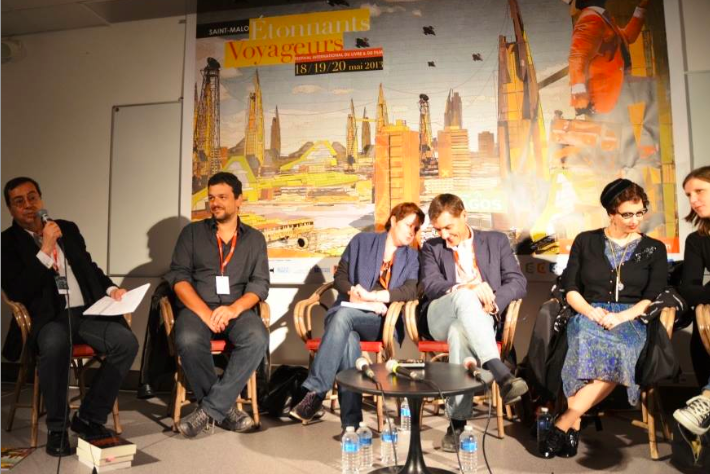 I was given an interpreter because I don’t speak a lick of French. Helen is also a translator, and she may be one of the coolest people ever. I got her for both festivals so you’ll see lots of pictures of me leaning in towards her. She preferred for me to speak in larger chunks and then to translate the whole concept into French. After multiple interviews and panels, by the end of the ten days I think she could have answered most questions without me. 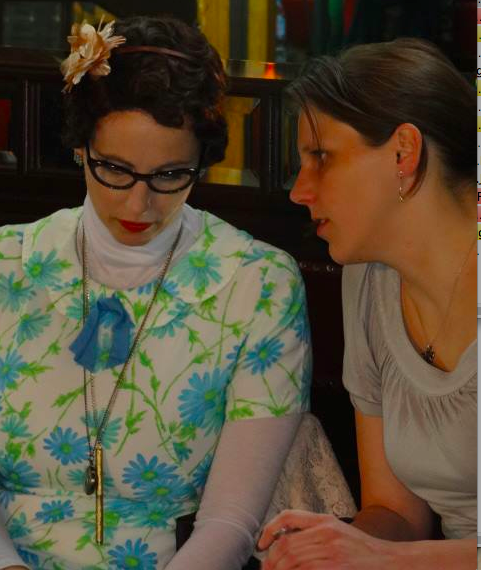 The festival put up the authors and also fed us this amazing buffet for lunch. We had meal vouchers for dinner to use at certain cafes around th city. It was great! I spent most of my time at my assigned station signing and chatting, very badly, with those who came up (Helen had more than one of us to deal with so we were on our own for signings.) The booth was run by a bookstore. 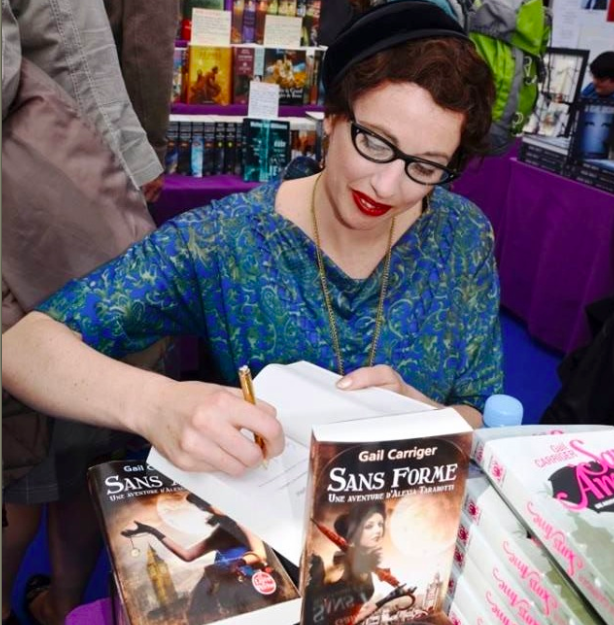 Signing in booth (also by Claire)

Also spent a good deal of time exchanging funny looks with Paolo Baccigaloupi across the way. 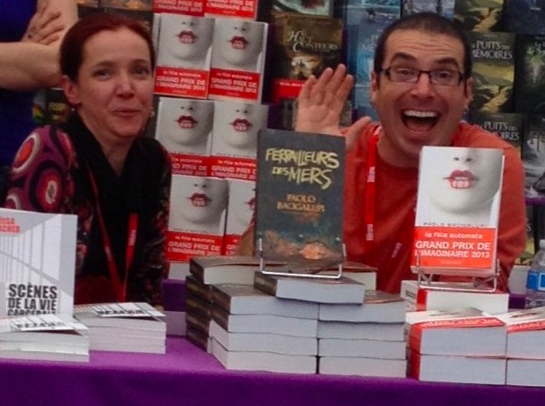 Paolo and his interpreter/translator Sarah

Paolo and I have been friends since we met at Balticon several years ago. (There was a late night incident with Mur Lafferty and chocolate martinis which created bonds than can never be broken … and I will say no more about that.) It was awesome to see him in France, nothing beats a friendly face. 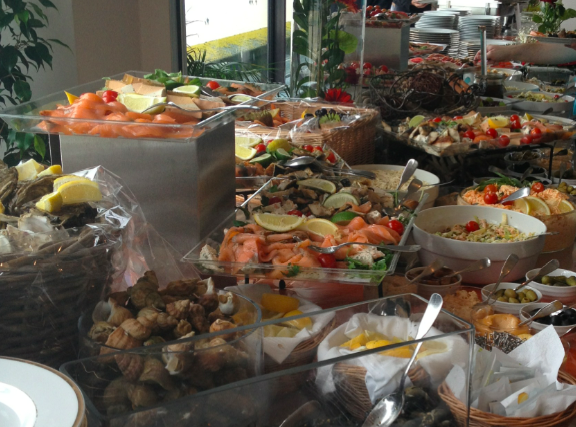 Lessons learned:
Spoons for breakfast, forks for lunch.
One does not have to actually do all of one’s signings. 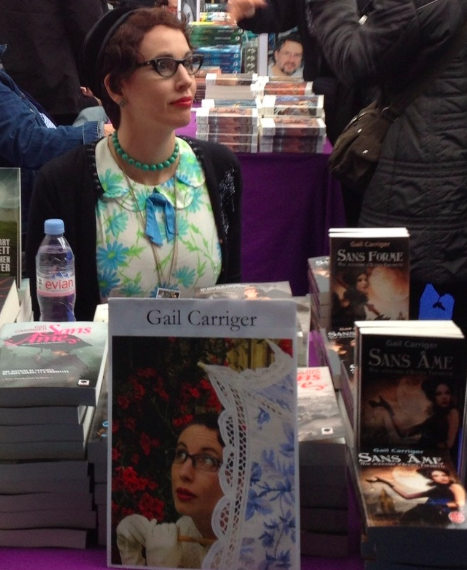 Spent:
Signing in the booth. Eating more seafood including the two shellfish I didn’t get yesterday – scallops and muscles. Both smaller then I am used to. Panel on gothic girls. Crazy dinner with other authors, I ate sweetbreads and they were yummy. Spent dinner mostly nattering with Paolo. Yay Paolo! 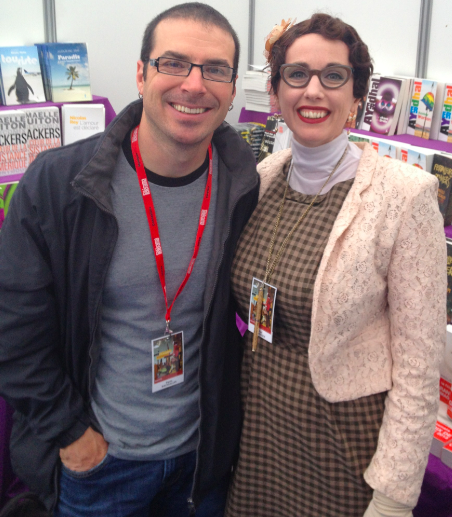 Lesson Learned:
Never let the French order the wine for everyone.
Always jump up first to pay your share of the bill.
I love whelks. 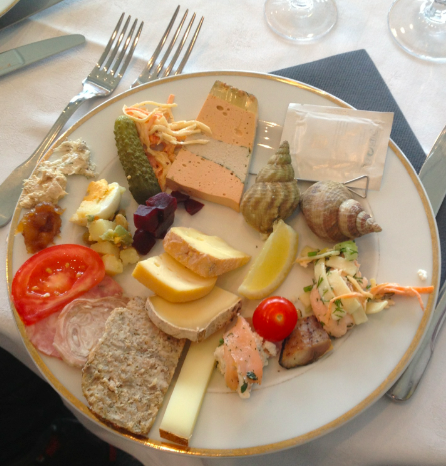 Spent:
Signing in the booth. Eating from the buffet in the green room I counted: 4 types pickled fish, 5 salmon dishes, 12 different head-cheese style lunch meats, whelks!, 8 cheeses, 14 desert options (not including cheese) and much more. In France buffet eats you! Went to museum and climbed up to battlements, very windy but beautiful. More signing. Arctic walk back and delicious pizza for dinner. 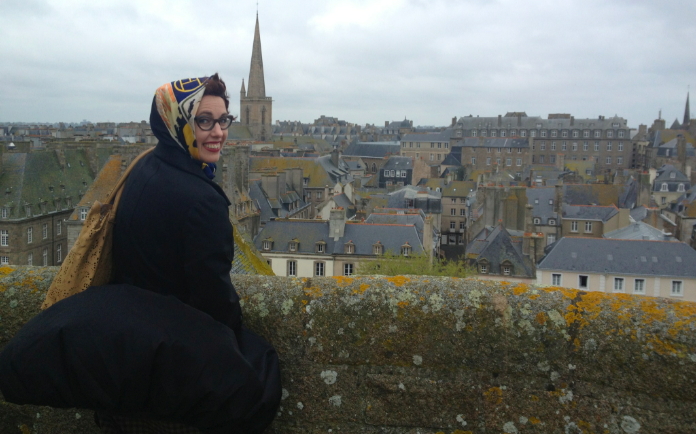 Lessons learned:
Flag of St. Malo is a caped weasel. Best. Thing. Ever. (Ok so it’s an ermine, but it looks like a weasel.) There is an andoulle so disgusting, I actually couldn’t eat it, and I eat anything. Also: 14 deserts is 4 desserts too many even for my super-powered sweet tooth. Regardless of what’s on offer, the mousse is always the best option. Rice pudding is the provenance of Portugal and India. Champagne goes great with pickled and smoked fish. And whelks! Love the sea snails. Love them good. And that, from my perspective, was Etonnants Voyageurs. But, you don’t have to take my word for it, here one of my French readers gives her report.

Do let me know if I’m neglecting to answer questions you may have about French book fairs, and I will try to address them in my next report when we poodle across the country to Epinal for Imaginales.

But first, tomorrow, there will be C&C contest winners! 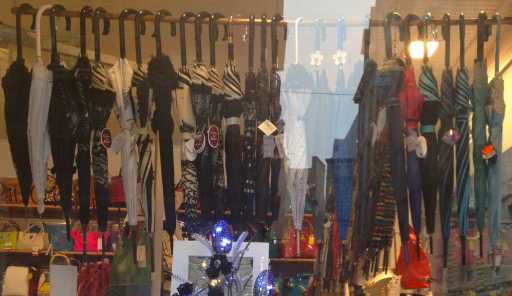 Umbrellas on display in St. Malo 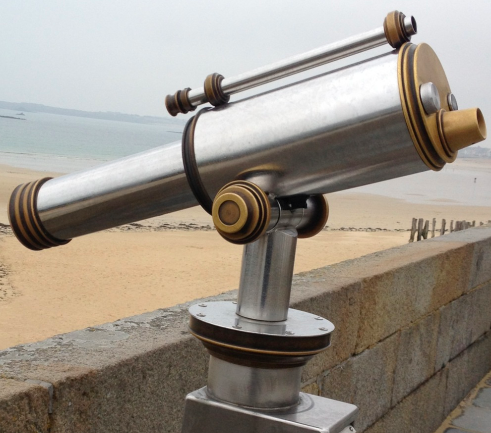 Spyglass with a steampunk look on the St. Malo ramparts. 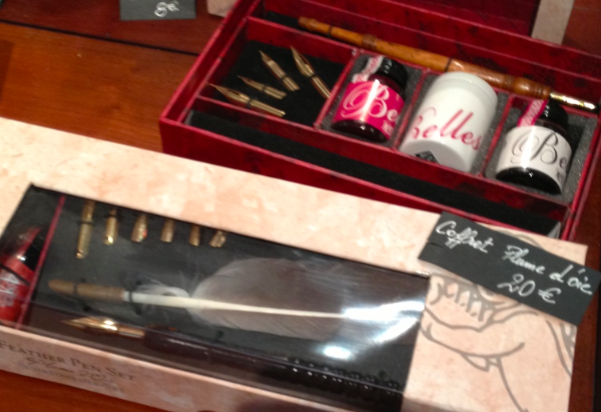 Quote of the Day:
“The dressmaking establishment recently opened in London by Princess Pierre Napoleon Bonnaparte, is thus described: A quiet page in buttons conducts the visitor to a room arranged with rare taste and elegance…”
~ Godey’s Lady’s Book and Magazine August 1872