So after eating my body weight in shell fish in St. Malo, we made our way across the width of France (pretty much) to Epinal in the Vosges Mountains for the Imaginales Festival. It was a blast, Gentle Reader. 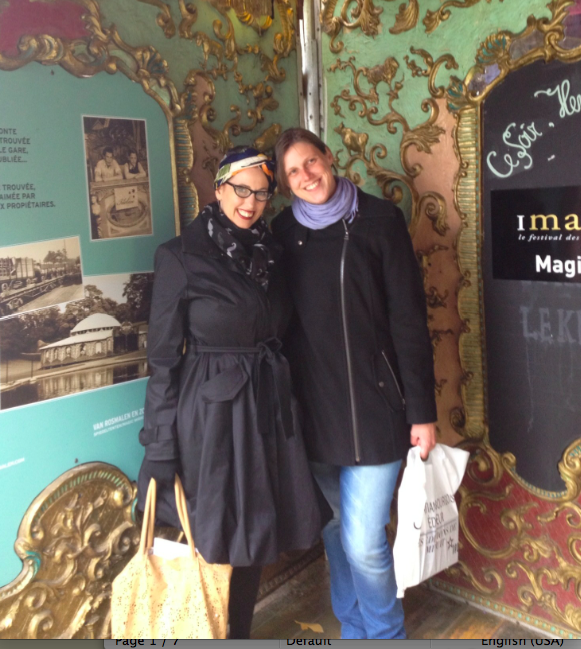 Self & Helen in front of Magic Mirrors Panel Room

There was an epic stall at the train station on the way there, when our lay over of two hours turned into six. I managed to convince the cafe there to give me hot boiled water (with their tea bag, which I rejected in favor of my own, Lipton indeed!) and a side of cold whole milk. As I do not speak any French, I consider this my biggest victory of the whole trip. 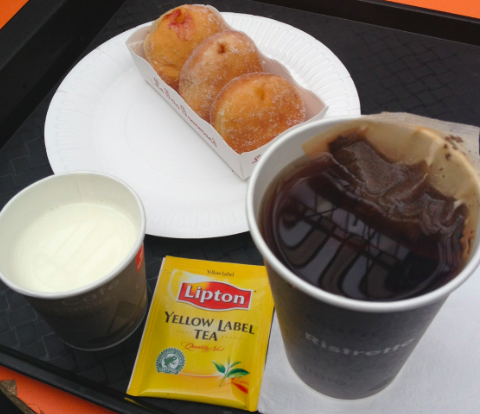 I know most of these posts seem to be centered on food, but frankly, that’s my personality ­– entirely driven by my gullet. I know I may come off as all writerly but, really, most of what I do in life centers around food. I know, after reading my books, I am sure you are shocked by this confession. Shocked! But now, on to Epinal. 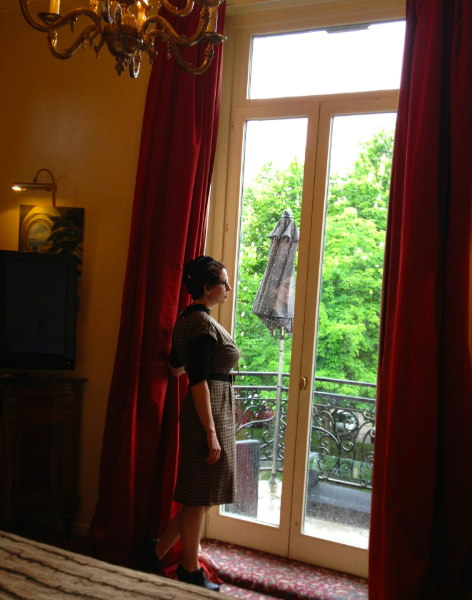 Self taking in the hotel’s lovely view of the park

Unlike Etonnants Voyageurs, Imaginales is fantasy centered. There didn’t seem to be all that much sci-fi even, although Urban Fantasy and Paranormal Romance are certainly creeping in. The French, rather charmingly call this sub-genre “Bit-Lit” (literature that bites). My books are classified as Bit-Lit. (I always find it interesting as to where marketing puts my series, given the books straddle so many sub genres.) At Imaginales I palled about with a group of fellow American including one of my oldest pro-circuit friends Ken Scholes. Also Kristin Cashore had come from St. Malo as well (a co-conspirator in bumbershoot obsession – she loves the umbrella, I love the parasol, an East Coast vs. West Coast thing?) and the marvelous Alexandra Ivy joined us fresh off the plane. 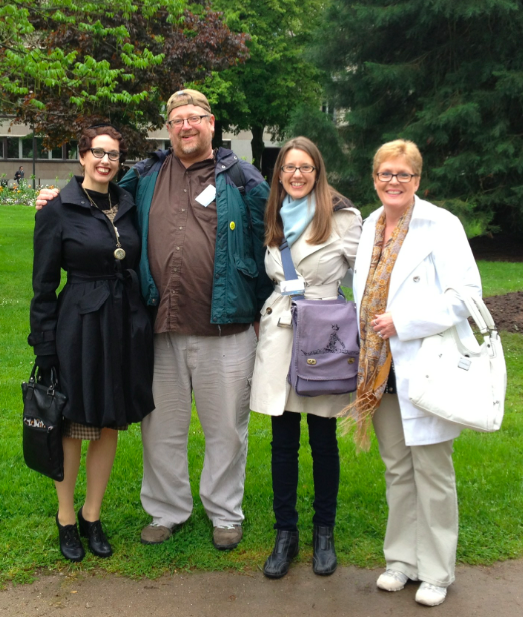 I had a wonderful time at Imaginles. Beforehand, everyone kept telling me it’s very “family friendly.” Which I took to mean full of children, but which actually meant that everyone behaved like family and was super chummy. There was a real sense of comradeship among the visiting authors ­– American, Germans, and British alike. And I must say the translators and industry folk who attended, seemed to be having just as much fun as us authors. We got up to a great deal of raucous mischief. But when we were out with the French, it was usually they who were the rowdiest, so I refuse to take all the blame as the bonkers American. The Germans behaved themselves though. Self and the lovely Kai Meyer

Imaginales is a pretty big deal for Epinal, the mayor welcomed us, we appeared on local TV, and the town restaurants threw open their proverbial doors. 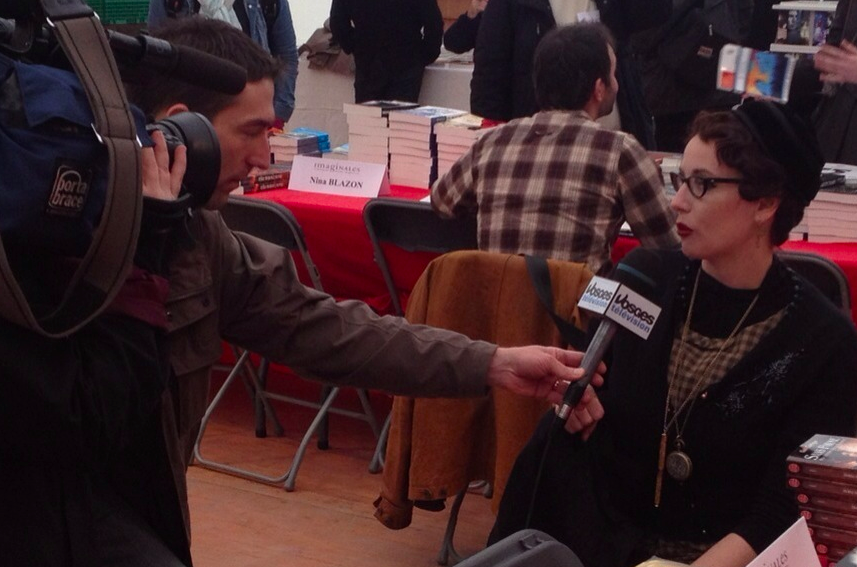 I ate three times at the local vegetarian place (so called because it has one meatless option on the menu and lots of healthy sides), twice at the delicious pizza joint, and the rest time delved deep into local cuisine. I even found tea! 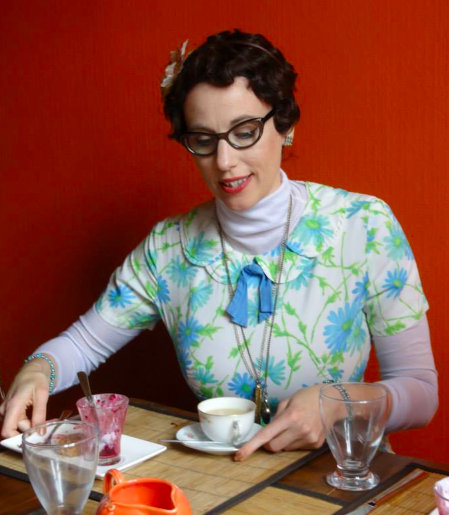 Finding joy in a cup of tea

One of the most unique experiences was the picnic, where French authors all bring their favorite local dishes to share with the visitors. Alexandra and I sallied forth into the madness and tried many a strange and delicious items. I developed a passing fondness for what was called magret (basically duck prosciutto). Big thanks go out to the lovely Stephanie of Imaginales, and warmest of wishes to all the volunteers, several of whom I wanted to take home in my pocket they were so cute. Also Helen is the best interpertor evah. And I can’t finish this post without mentioning my killer Orbit team, who took amazingly good care of me and ushered the lost waif from one event to the next with goodwill and the regular application of Author’s Oil (aka booze). 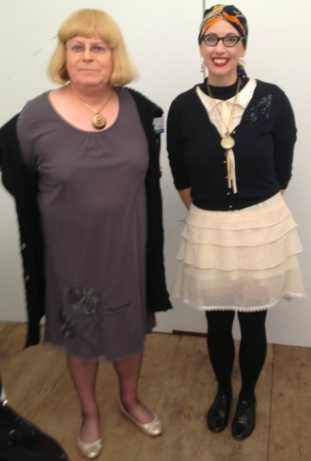 Stephanie and I pose in the interview zone.

You don’t have to take my word for it, here’s a blog all about me at Imaginales from the lovely Grande Dames of French bloggers. I am particularly pleased to note the sea pig warranted a mention. You have heard of the sea pig, yes?

Day 7, Travel
Spent:
Mostly in taxis, on a train, at a train station outlasting a bomb scare, then in a train again. Finally in hotel. Epinal puts its authors up in swanky digs! 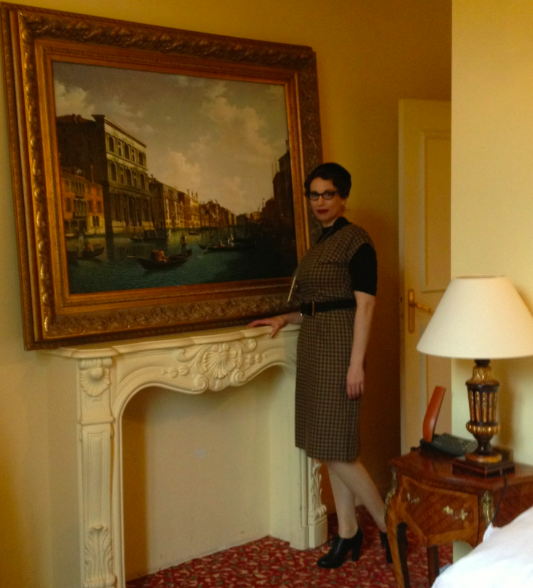 Lessons learned:
French men have a thing about lollipops.
Always pack a suitcase small enough to go in the overhead on a train. 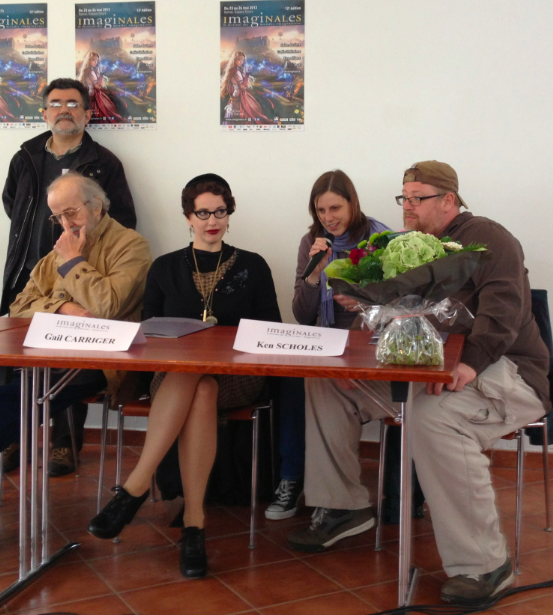 Had to share Helen with Ken for the first Panel. She’s mine!

Learns learned:
Never try to out drink or out eat the French. 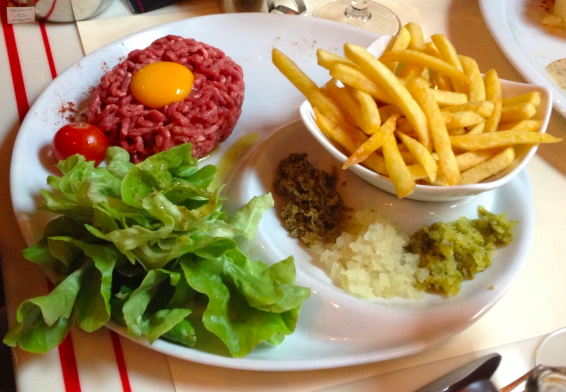 Day 9, Epinal
Spent:
Food, interviews, blogger lunch and tea, panel, signing, fancy dinner out at a castle Gail is delivered by a veggie truck, cheese, too much wine. 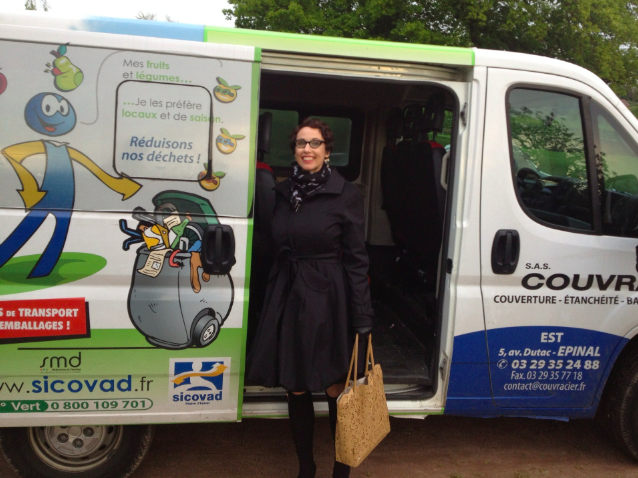 Lesson learned:
France is not the place to visit if you are gluten intolerant, vegetarian, or allergic to cigarette smoke.
I already find coffee challenging. French coffee is like a bitter Napoleon waging war on your taste buds. 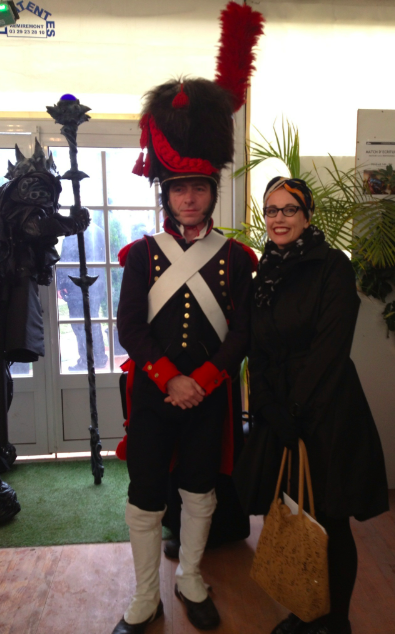 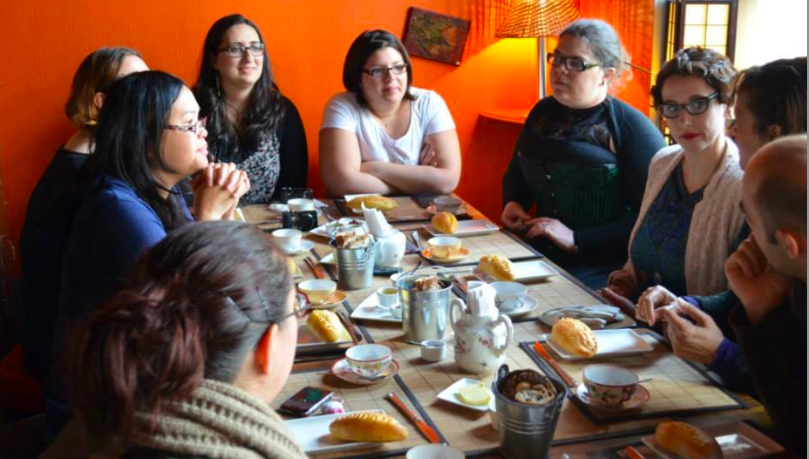 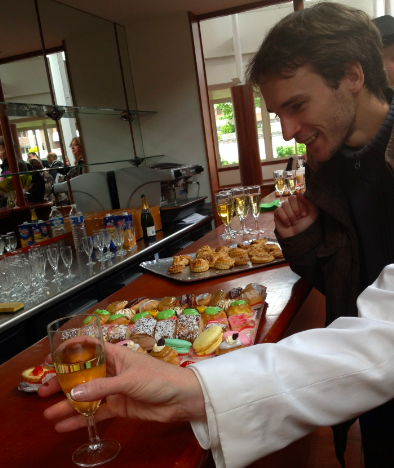 I did get an amazing amount of tribute from my French readers. I have pictures to come. Unfortunately, I had to eat and use most of it there, as I never travel with a suitcase large enough to bring large items back with me. 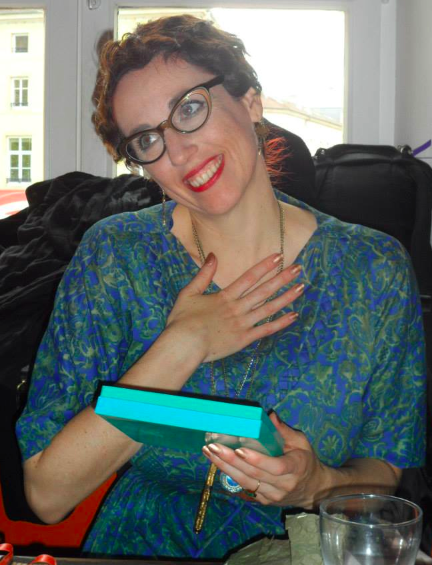 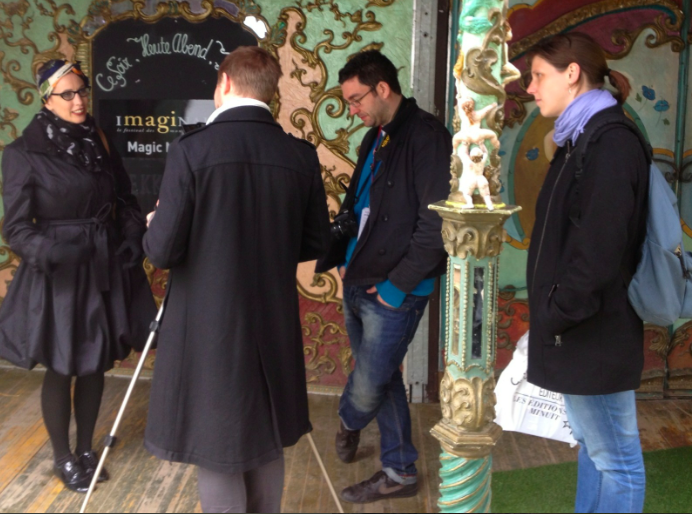 Lesson learned:
More than three days of a convention and I struggle, must pace myself better next time.
Can’t wait to come back! The rest of my time in France I took as a vacation. I have a few pictures of steampunk and Gail-ish type things which I may do a blog about or may just leak in over the next few weeks. I know, vacation, imagine that? I realize that last year I took about 2 weeks all told. I’m trying to do better in future ~ work/life balance and all that. It’s the odd thing about working for one’s self, it’s very easy to just never stop. Even while I was on vacation I still checked in regularly, answered email, and you can probably tell form twitter/FB I had a hard time staying offline.

But I did have a fab time. The AB and I visited Colmar, Strasbourg, and ended in Paris. I ate too much. No surprise there. But the best meal I had the entire time was a duck dish at:

If you’re in Paris, do try to go there. Really, it’s worth the metro trip. 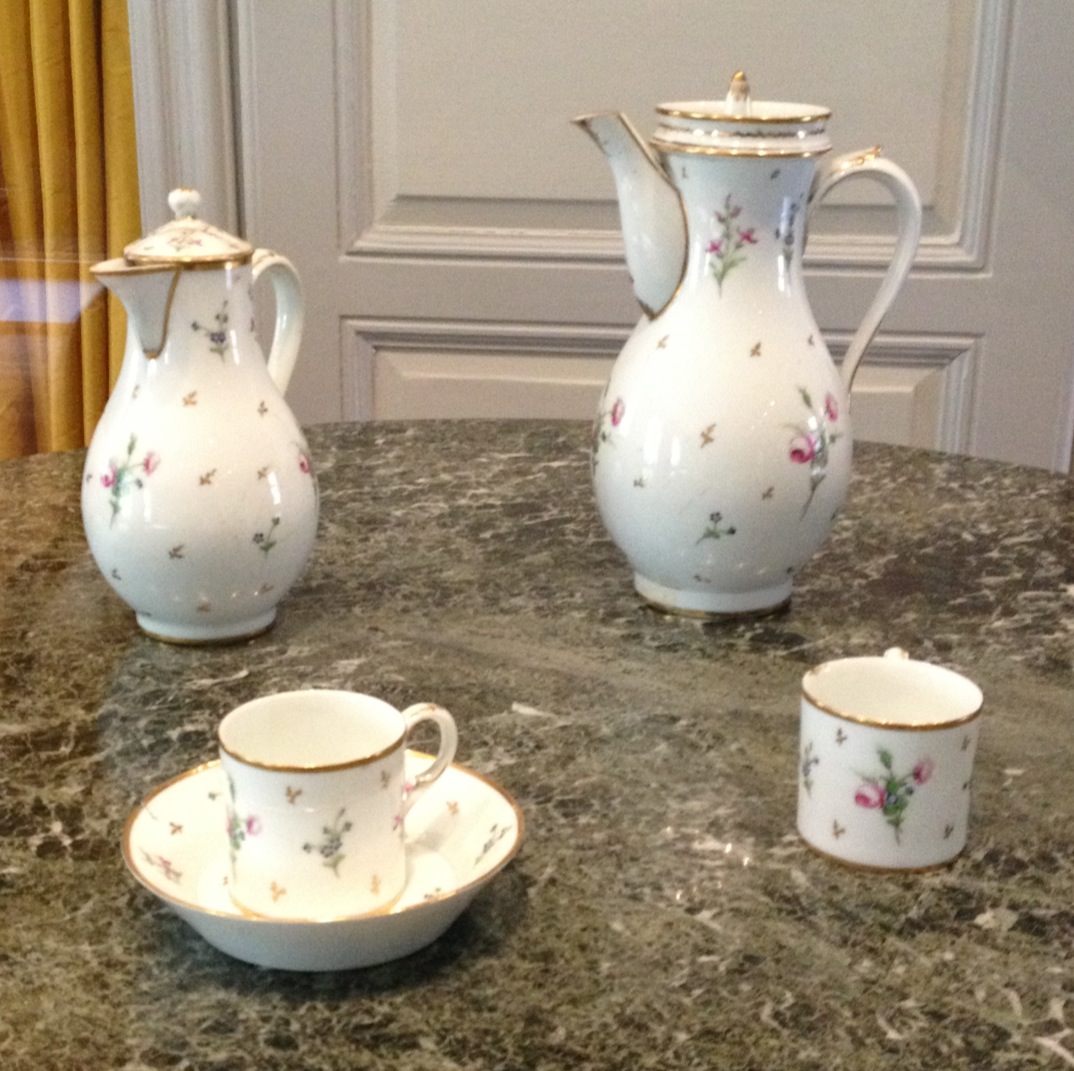 Teapot at the Colmar musuem (could be chocolate pot)

Locking chests at the Colmar Museum 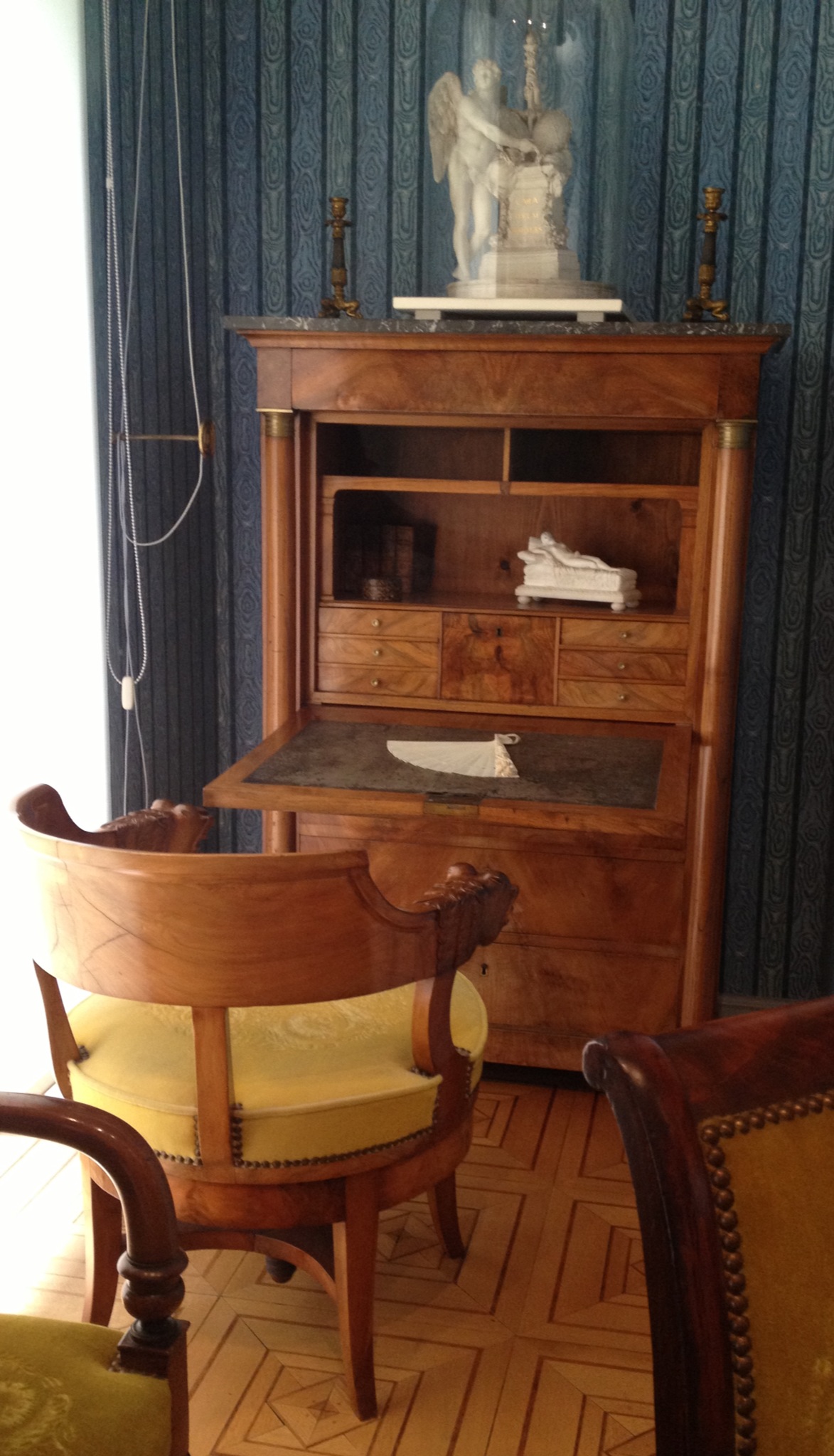 Writing desk at the Colmar Museum

Book News:
Calico Reaction says of E&E,  “I think the best way to describe this book to readers unfamiliar with Carriger is that it’s a hyrbid of J.K. Rowling’s Harry Potter books and Scott Westerfeld’s Leviathan trilogy.”

Quote of the Day:
“A Mysterious Visitor.
Among the recent visitors to London we find notified an extraordinarily dense fog. This visitor, though somewhat obscure, created considerable sensation, and a sort of general illumination was got up by the London shopkeepers on the occasion. The fog arrived by the Thames, and made so much of the short time of remaining that the visitor was nearly all over London in a very brief period.”
~ Punch August 1853