If your latest book were chocolate, what kind would it be and why?
A dark chocolate turtle: sweet but not too sweet, chewy in places, and full of nuts.

I said I wasn’t going to do any more crazy books tours, Gentle Reader, didn’t I? Or was that some other author beast? Well, this was a whirlwind, I tell you. A Sophronia-like trip through the dumbwaiter of TSA, up and down the staircase of school visits, all ending with the hurled trifle of hotel living.

The Curtsies & Conspiracies Book Tour began, low these two weeks ago now, on the 5th of November at Hicklebee’s in San Jose. 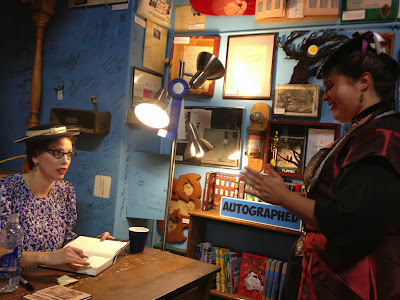 Hicklebee’s is known as one of the oldest running children’s bookstores in the Bay Area, a pillar of their local community. Literally, as they have visiting authors sign the walls and pillars of their store.

See? I signed a pillar!

A small but excited group turned out for the launch including, much to my relief, about 50% Young Persons. Not that I don’t love you, but I was beginning to get a complex that the target age range for the Finishing Books wasn’t actually reading them. We showed the two videos and then I talked for a bit about C&C. I’ve stopped reading out of my books at events. I generally get more than enough questions to fill the time and I figure it’s better if you read it yourself, or listen to Moira on the audiobooks. She does such a marvelous job, much better than I.

Then it was time to sign, grab a bite to eat and head home.

Hicklebee’s also kindly set me up for my very first school visit the next day. So it was back down to the South Bay for an on-stage appearance in front of some 250 Young Persons. I don’t mind admitting it, Gentle Reader, I was very nervous. I had no idea what to expect. Would they be restless? Would they be nasty? Would they hurl fruit? You see for an Old Person who writes for Young Persons I have regrettably little exposure to the species.

It was awesome! No really. They asked the most interesting questions; tons of them. I had an hour to fill and we did it easily, there were hundreds of hands up at a time and I got crazy fantastic queries that I have never had before. I really had a great time. Sorry, no pictures survived the event. I assure you, I was wearing a very cute pink dress.

Then it was back home to pack for my flight the next day to Seattle.

Seattle greeted me with, yes, you guessed it, rain. I packed for it. I’ve very much learned. I love Seattle, frankly because Seattle seems to love me. I got to have lunch with one of my first and favorite Steampunk friends, the Airship Ambassador. We discussed the state of the movement, the state of the world, and the state of our lives ~ not necessarily in that order. My first Seattle event was at Third Place Books and I nearly didn’t make it as part of the city was down in a power outage which had taken out the traffic lights. I dashed in fashionably late and commenced nattering only slightly out of breath.

There was a gratifyingly nice turn out involving at least a few Young People and one Lord Akeldama. It is always a pleasure to be visited by ones own characters, although apt to make a girl feel even more than normally delusional. 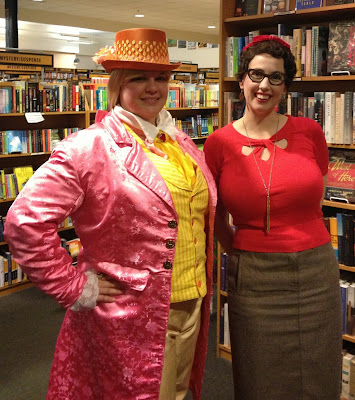 I also ran into an old acquaintance from . . . before . . . who due to multiple identities and various costumed events in our past didn’t realize I was me, as it were, but had found my books regardless. Always fun. Then it was off to delicious sushi with Phil & Kaja Foglio of Girl Genius fame (steampunkers are everywhere, *insert evil laugh here*), the stunning Cupcake Goth and her not-stunt husband. Raucous times ensued, including stories of their mutual roots in gaming and an explanation as to why there are so many cool artistic types in Seattle. It’s all clear to me now.

Then back to the hotel for a quick sleep, check out, and off to Queen Anne Book Company for tea. 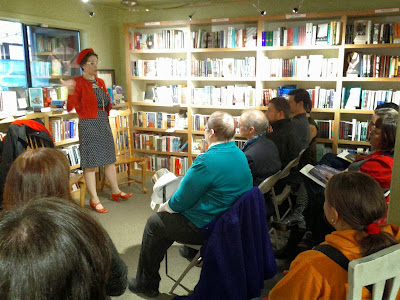 It is of continued delight to me that my books encourage such civilized behavior as small sandwiches, sweet nibbles, and a carafe of excellent hot beverage. The teacup I had been gifted the evening before got immediate use. 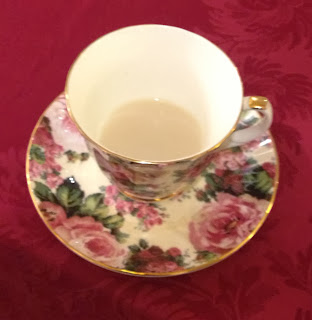 Friends and readers (now, new friends) turned up with bells on despite the gloominess of the day. Queen Anne really pulled out all the stops to make it a great little event, full of good humor and good cheer to go along with good food and good tea. Add to that good company and good books, and what more can a girl want out of life? 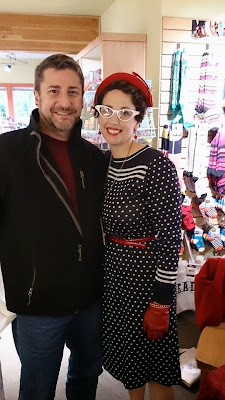 One reader even came down during her lunch break from a high end chocolate maker up the way, Chocolopolis. Of course, I had to pay them a visit after my event. I love me some delicious chocolate but I’m afraid I haven’t a particularly refined pallet for such things. I gravitated to the most AMAZING passion fruit and white chocolate bar. Yes, I am one of those fools who like white chocolate, and after my stint excavating in Peru (where I would drink maracuyá juice by the pint) passion fruit is one of my top 10 favorite fruit flavors. That said, the AB is a chocoholic and if I can when traveling, I try to find something nutty and dark to feed the cuteness. Chocolopolis provided in spades, I was almost paralyzed by the number of options. 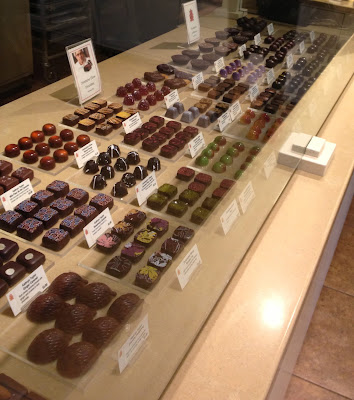 After leaving the chocolate behind (I miss you already) we heading off to sign stock at the local University Bookstore and at Seattle Mystery Bookshop. I enjoy this part as well, bookstore people are always so awesome, sweet, and enthusiastic. Being readers themselves, I suppose. 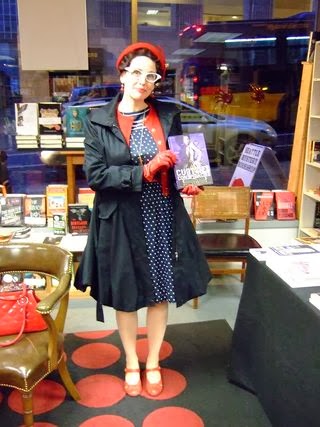 Then it was back on the plane to fly home, arriving well after midnight, to climb into bed exhausted. Next day, I had a pause to recover, and appreciate my tribute. 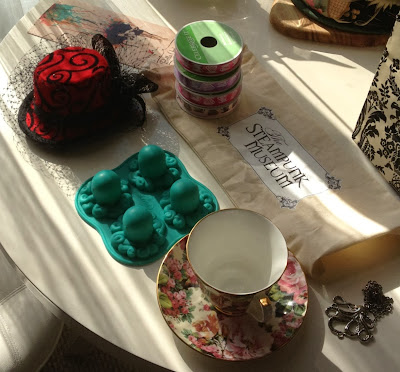 So much cuteness! Yes that is an octopus ice cube maker, and it fit in the tiny fridge at the office. The teacup has also gone to join the collection. That’s tea ribbon there, which I haven’t decided what to do with, yet, but I know some costume soon will require trim. I’m hoping to have a little time to sew next week, the mending is MOUNDING up.

A week after Curtsies & Conspiracies hit shelves, it was into The City to Borderlands, my beloved stomping grounds. Borderlands was the first bookstore to host me for a signing of Soulless way back when (a whole three years ago), they have always been enthusiastic about my books. I visit them as often as possible, and if you want a signed copy of any of my work, they are the place to go. (I got the idea from Sigler.) 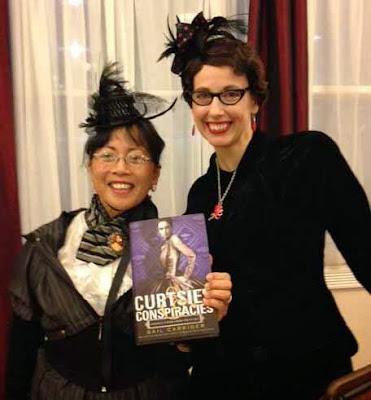 Familiar faces, and a few new ones, filled in the Borderlands Cafe, asked marvelous questions and generally made for an enjoyable evening. Also, more presents were pressed upon me, amazing and inventive items, most of which have gone to the office for costume, decorative, and tea consumption purposes. 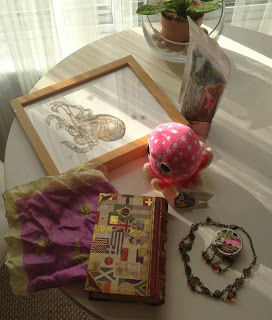 The next day it was up to the North Bay for another school visit in Santa Rosa and a small gathering at Copperfields in Petaluma. I felt an old hat at school events, since I’d had one already, although I arrived late and flustered since it was a very well hidden school. Nevertheless, it went well, and again I was impressed with the scope of the questions. Some of the 7th graders were doing Nanowrimo (!) and asked complicated things about pacing, POV, and other writerly tricks. I was bowled over by the sophistication of their interest and it turned out to be the perfect time for them to meet a professional writer. I brought the Japanese translation of E&E and my steampunk fan from Brute Force studios for them to handle. The students were gratifyingly interested. 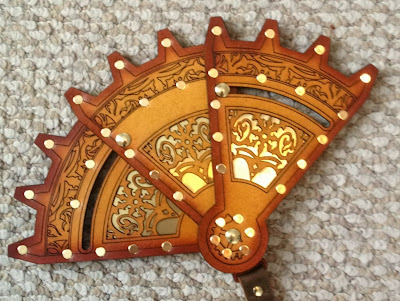 FYI the fan will appear on the cover of the next book, Waistcoats & Weaponry. I’ve had a sneak peak and I think you’ll love it. And I’ve seen the cover of the Japanese translation for Curtsies & Conspiracies as well. So cute. Cover art reveals to come soon.

Now where was I?

Oh yes, after the school visit it was time for my last bookstore, Copperfield‘s. Which was a small gathering, mostly friends and family, but still very fun. 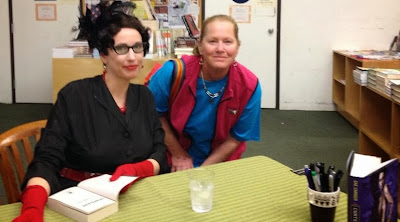 I must say I was pretty exhausted by this point home for a sleep, a restorative brew, and another day of packing. Because the day after it was time to fly to Canada! 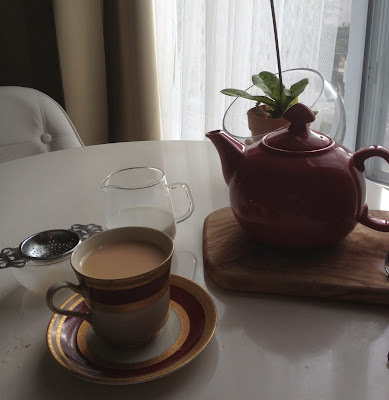 Next up, can Gail survive the freezing cold of the Great White North? Winter is coming! Oh no, wait, that’s just Edmonton. 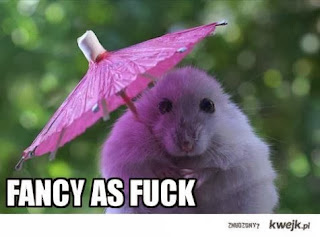 Your Writerly Tinctures . . .
The Best Resources for Writers

Book News:
Mysterias interviews me. Asking, among other things, What’s your idea of a perfect day?
Up, tea, slow start – perhaps read a bit of a good book. Then out for a tasty breakfast (should involve poached egg, tomato and spinach and a great latte). Clothes shopping in some vintage heaven, like Haight Street in San Francisco, followed by a light lunch then more reading and tea. I’d end the day with a quiet walk on the beach watching the sunset. Sushi or something equally fishy for dinner, a new episode of QI, and then a hot tub before bed. Some variety of French macaron would also be included in there somewhere.