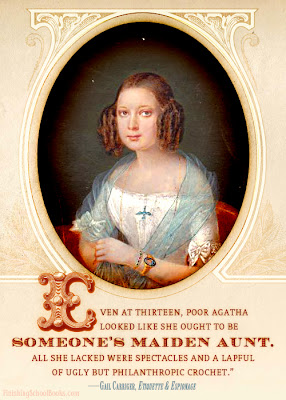 Agatha is one of Sophronia’s friends. She shares are room with Sidheag and, at first, is a little overcome by Sidheag’s brashness and Sophronia’s boldness. But she is perceptive enough to realize when someone has a good heart. The other three begin look after her as if she were a kind of pet. Secretly, Agatha is quite wealthy, and it is her father who wants her to be trained by that special kind of Finishing School.

“Agatha Woosmoss, daughter of the noted railroad baron.” The chubby girl looked up quickly from her shoes, nodded, and then returned to her intense scrutiny of her own feet.
~ From Etiquette & Espionage

Agatha Woosmoss was small, round, and redheaded with a freckled face that wore a perpetual expression of distressed confusion, not unlike that of a damp cat.
~ From Curtsies & Conspiracies

(Speaking of which, have you seen Edith with Googly Eyes on Tumblr? We live in a world full of genius.)

I always imagined Agatha might blossom a bit, but she will always remain slightly timid and unsure of herself. She struggles with Finishing School lessons, but she does try hard, for her family’s sake.

I love this picture, it’s many years too late for my books, but it’s so Finishing School. I imagine that Dimity is at the front in the blue, with the parasol, Sophronia is next to her in black, plotting, Sidheag walls behind in the blue with the black hat, and Agatha is the timid one with the red band around her hat, Monique is in the the pink.

Agatha has pretty terrible taste in clothing but a whole lot of money to spend on it. Thus she tends to buy rich fabrics in awful muted color combinations exactly wrong for her complexion.

The girls, upon occasion, will be shocked to round a corner of an evening and encounter her wearing something like this:

Here’s the kind of thing she would wear during the day to lessons and such:

For evening, and under Mademoiselle Geraldine’s careful guidance, she might wear something like the following. Yes, it’s an little old fashioned in fabric, and simple, but well made and costly.

And after Dimity got hold of her and made sure she fancied it up a bit.

I, of course, have a terrible weakness for red heads. I blame Anne of Green Gables. Agatha, as with everything at Mademoiselle Geraldine’s Finishing Academy for Young Ladies of Quality, is probably not what she seems. Or is she?

Your Infusion of Cute . . .
Redheads in Jane Austen.

Your Writerly Tinctures . . .
A Question of Book Trailers

Book News:
Update on the calendar project. (Was a kickstarter.) 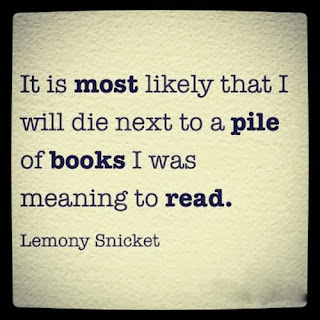