I attended an undergraduate university attached to a well known conservatory of music.  (Follow me for a moment, please, I do have a point.) I had a number of friends who were musicians and ended up getting a wide musical education as a result of supporting them by attending their recitals and concerts. One of the things I grew to love was the modern classical movement. Not because I have depth of appreciation for the style (because I don’t have the ear) but because of the tuba. Particularly because modern composers often use the tuba to make some fantastic noises, one of which is a protracted, resounding, low fart (there really is no other way to describe it). 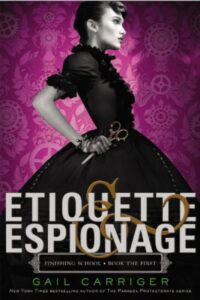 I’d like you, Gentle Reader, to imagine that noise while I say that I’m as self conscious as most authors when tooting my own horn, so instead please allow me to…

Fart my own tuba.

I’m delighted to announce, much to my pleasure and surprise, that Etiquette & Espionage was selected for both:

“In this madcap, steampunk-mystery, Sophronia Temminnick learns that etiquette and espionage go hand-in-glove when she is covertly recruited from Mademoiselle Geraldine’s Finishing Academy for Young Ladies of Quality. A paranormal mashup set in Victorian England.”

“Proper etiquette is most important for young ladies, but so is knowing how to correctly conceal a weapon.”

What I say is,

I do love them so so much. I’ve blogged before about how I grew up in the library, how library page was my first job, and how much their support means to me as an author. To know I managed to hold on to it when I transitioned to YA actually does bring tears to my eyes. I know, I’m corny.  Thank you from the bottom of my warped little soul.

And we fade to silence the ptttt noise of the farting tuba.

Comedy, my dear gentle reader, is the only means I have of dealing with accolade. Frankly, it’s the only way I have to deal with most things.

On Writing: Dealing With “I Don’t Wanna”

“Somewhere between Steampunk, Oz, and Jane Austen, you can find the world of Gail Carriger’s wonderful new young adult series, starting with Etiquette & Espionage. A misfit young English lady in the Napoleonic era is sent to a highly unusual finishing school — where, dodging highway robbers and the occasional werewolf, she finds her way through the cracks and creases of society and school. The sequel, Curtsies & Conspiracies, just came out.”

“When in doubt, shoot the wizard.”