Life has been unbelievably busy lately, Gentle Reader. Ever since my trip to NY derailed my finishing M&M, I’ve been playing ketchup. First I had to do M&M’s TKs, knowing if I left them for later they would take me 2x as long.

TK is the text notation many of us writers put in for a future callback. It’s searchable shorthand for “To Come” as “T” and “K” don’t exist together in the English language. I use it for items that will need extensive research, chronological checks, and events or descriptions I have to check against previous books to avoid consistency errors. TK allows me to write without stopping knowing I can fix errors later. However, if I leave too many, I’m setting myself up for days of work at the end of a manuscript.

Back to the saga…

Then there was a bust up and an extension on my W&W copy edits, mixed in with those came #TwitterFiction, then I had ConDor in San Diego. So rolled straight from TKs on the last Finishing School book into copy edits on the third one. Not necessarily a bad thing as it allows me to refresh my memory of what happened in #3 and make notes for more fixes in #4 in a few months.

Above lower left working right: map of London; timeline for all in world books and short stories; Baedeker’s Guide to Great Britain; English Women’s Clothing in the Nineteenth Century; schematic diagram of the Finishing School dirigible; timeline of history (with my own notations as to Victoria’s little wars and occurrences in my version of the world); blue story bible for the Finishing School series.

Gail Quibble Carriger has a bad case of the hads right now.

So back to the ketchup: Mixed up in all the above was some hastily scheduled minor surgery, which, having cosmetic consequences, turned me into a recluse unable to exercise for over a month ~ rather driving me stir crazy. Anyway, as a result, I’m now delayed on the Prudence rewrites, and (as you may have noticed) this blog is running behind as well. Grrr.

I’m hoping Prudence won’t be as hard as I have built it up to be. I’ve decided on a two prong attack stratagem: 1. digital read through and major plot point fixing as organically as possible, 2. printout read through page by page catch all note fixing. It’s going to be a dozy. You know that stretching sensation around the eyes? Yeah.

What does this mean for you? Not a whole lot. Blog posts might be slightly fewer or shorter or both. My social media presence is on a diet, and I won’t be doing any other commitments except those I’ve already agreed to. Not until July at any rate.

Why climate change is bad for India’s tea producers

5 Elements Sigh-Worthy Romance Novels Must Have 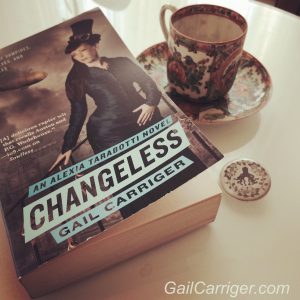 Book News:
Girl Lost in a Book says of Changeless,

“This book ends leaving the reader dying to know what happens next, so it was impossible to not pick up the next book in this series.”

[Leap frog] “is so humiliating to the boy who bends himself over and puts his hands down on his knees, and it is so perilous for the boy who, placing his hands on the stooped shoulders, attempts to fly over.”