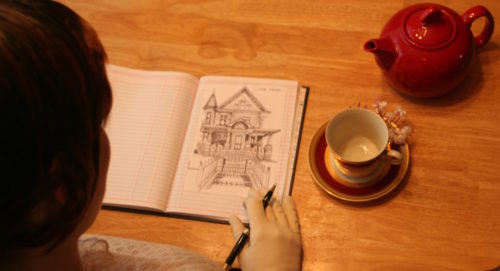 One of the things I love about traveling in the UK is the architecture. I’m a particular fan of the mixing of time periods you often find in smaller towns.

However, while I am in London, I’ll be paying attention to the less flashy Victorian houses, because I have been researching them lately.

In the late 1890s an American visitor to London describes the houses as:

“very tall, and very plain, and very narrow, and quite expressionless, except that it wore a sort of dirty brown frown. Like its neighbours, it had a well in front of it, and steps leading down in to the well, and an iron fence round the steps, and a brass bell-handle lettered ‘Tradesmen’. Like its neighbours, too, it wore boxes of spotty black greenery on the window-sills – in fact, it was very like its neighbours . . . Half-Moon Street, to me, looked like a family of houses – a family differing in heights and complexions and the colour of its hair, but sharing all the characteristics of a family – of an old family.”

In the 1890s a standard house in town would be arranged roughly like so:

The complexity of the bedroom is particularly interesting to me.

“Mattresses were of organic fibre: horsehair mattresses were the best; cow’s-hair ones were cheaper, although they did not wear as well; even less expensive were wool mattresses. A straw mattress, or palliase, could be put under a hair mattress to protect it from the iron bedstead. Chain-spring mattresses were available in the second half of the century, but they were expensive, and they still needed a hair mattress over them. It was recommended that a brown holland square should be tied over the chains, to stop the hair mattress from being chewed by the springs. The hair mattress itself then needed to be covered with another holland case, to protect it from soot and dirt. If the bed had no springs, a feather bed – which was also expensive, hard to maintain, and a great luxury –  could be added on top of the mattress. An underblanket, called a binding blanket, was recommended over the hair mattress.”

“After the basics (all of which needed turning and shaking every day, as otherwise the natural fibre had a tendancy to mat and clump), the bedding for cold, usually fireless rooms consisted of an under sheet (tucked into the lower mattress, not the upper, again to protect from soot), a bottom sheet, a top sheet, blankets (three or four per bed in the winter), a bolster, pillows, bolster and pillow-covers in holland, and bolster- and pillow-cases.”

Bedding clearly was in just as many layers and just as complex a Victorian ballgown! Speaking of which over on Retro Rack I lay out a fantasy of some of Alexia’s underthings.

How To Create Modern Victorian Interiors

“Don’t blame a man for the style of his literary apartments and more than you would for the color of his hair of the shape of his nose.”