“In truth, I have never flashed so much as an ankle before, but I am sorely vexed at being treated like a temptress when all I feel is bruised and broken.”

The series premise: three girls from difference backgrounds are deemed daughters of death and taken in to a mysterious convent where they are trained as assassins, called death’s handmaidens.  Each is then sent from the convent into the politics of late 1400s Brittany where they find self confidence through love, purpose, and place in society. 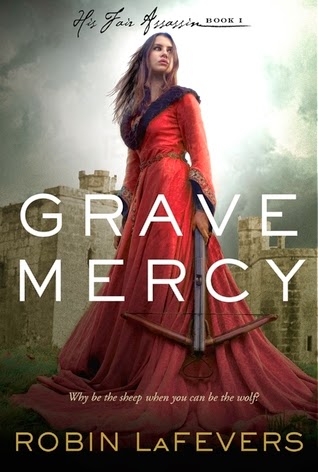 Grave Mercy is about Ismae, an abused peasant girl, for whom a convent is salvation and her devotion to her god, Death, a redemption and a means to self actualization. Her journey is one of faith ~ learning to define faith for herself, to find faith in others, and to have faith in her own abilities and in love.

“Even my own father has not recognized me.
Duval brings his horse closer to mine. “Someone you know?” he murmurs.
“He is no one,” I say, and for the first time I realize it is true.”

Ismae is sent into the high politics of the time to unearth betrayal, learning along the way what she must question and who she must become. She is learning about herself as she learns about her world, and what kind of place and path is open to her.

“Is that what my life has been? A series of trials to be passed?”
“You come to us well tempered, my child, and it is not in my nature to be sorry for it.
It is the well-tempered blade that is the strongest.”

Ismae is a gentle almost sweet character, a fish out of water in the best sense, despite her deadly abilities. The romance that develops between her and the man she is supposed to watch is part of her own journey learning to trust not just men but herself: in her heart, in her abilities, and in her judgement.

“And I would find a way to serve both my god and my heart. Surely He does not give us hearts so we may spend our lives ignoring them.”

I adored this book. So much so that I entirely forgave it some initial world building and historical exposition. This was front loaded, once through the beginning chapters (to Ismae’s first kill and the introduction of the hero) the pace picks up considerably. I wanted more of the assassin training, because I like the school aspect of most books (well, duh, I wrote a whole series about this) but I can understand why it wasn’t there (or was cut out). I enjoyed the journey and the characters (even though I didn’t personally relate to them) but I liked them both much more as they are set into motion, on the road and into the city and politics. I thought some of the romance was a little much ~ salvation through sex has never been a trope I latch on to myself. However, I wonder if LaFevers is playing parody with that trope in her connubial culmination, as Ismae literally saves Duval with her body.

“I am filled with a sense of peace. Yes, I think. Yes. This is what I want to be. An instrument of mercy, not vengeance.”

From a writer perspective I admired how LaFevers snuck in details and historical world building without being ham handed about it. She does so in description:

“She is a drab peahen of a woman with sharp, intelligent eyes, and I warm to her immediately.”

“I like that he does not apologize for his looks, that he throws them down like a gauntlet.”

Or in the middle of dialogue:

“I take a pinch of salt from the saltcellar and sprinkle it on my venison.”

In fact, in general her powers of description rather amazed me. I mean just read this:

“Beast sends me a number of worried glances, small flickers of concern that prick against my skin.”

“Feeling restless and awkward, I pace as I nibble, unable to stand still. It is as if sometime during the night I have outgrown my own skin.”

Continue on with the series?

How could I not? In fact, I already did. 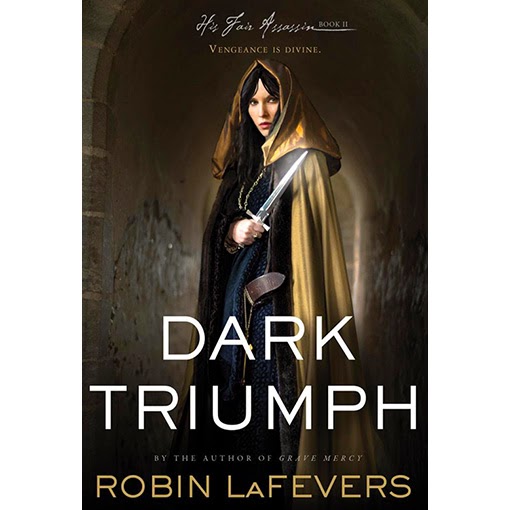 On the flip side from Ismae, Sybella’s journey is about closure. This second book Dark Triumph is a much tougher read, and darker than I normally prefer. Sybella, terribly abused and broken, is sent back from the only sanctuary she has ever known into the vipers nest that is the family that nearly destroyed her sanity. Unlike Ismae, she knows she can’t trust anyone, ever. Her journey is one of rising above this background and becoming the person she should have been all along, had she not suffered such an abusive childhood.

I tend to prefer my books on the lighter end of the spectrum, so I did find this one hard to read. However, once Sybella escapes (no spoiler there, you know it has to happen) and is out of the oppressive family fold and the romance thread begins, I liked her that much more because of her darkness. Sybella could have been a very unlikeable character, particularly as she is paired with one of the most likeable side characters from the previous book, but the romance and her personality evolution is handled deftly enough to make it plausible. My advice is just to read and don’t stop to think about what that kind of abuse would actually do to a girl. I should say it’s never graphic, which is how I came to stomach it.

I would understand, however, struggling with this book after the first. They are quite different characters and stories. 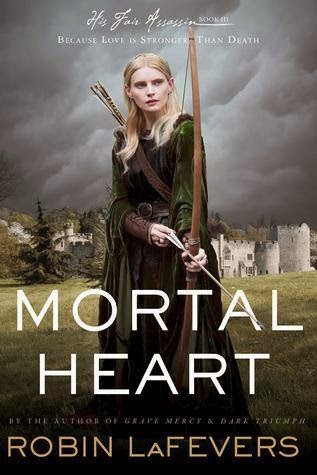 On to the Last Book?

Absolutely. I’ll be reading this while I travel in November (so long as I get it in time), since next month’s book group pick is my own book. (I certain don’t need to reread Waistcoats & Weaponry AGAIN!) Heh, it’s my book group, I can do that.

So, what’s next for the book group?

Waistcoats & Weaponry. It’s my book, so I won’t be reviewing it, of course (although I may give you some secret thoughts as to how I feel about it). But as soon as I get back from tour I will be around to (sort of) participate in the read along, in so far as you may ask me questions and tender comments and such.

Speaking of which, I’ve added a new element to the Monthly Chirrup which is sort of like a chatty retrospective on the previous month meets confessional. It’s a bit more intimate than here on the blog. Since my blog is public and my newsletter subscription-based, I feel like that forum is better suited to some of my more private thoughts. I guess what I am trying to say is that if you are here with voyeuristic intent, the Chirrup might be a bit more voyeuristic. Or something. Sigh.

{What is Gail’s Book Group reading for November? Waistcoats & Weaponry by Gail Carriger}

Your Tisane of Smart . . .
13 fangtastic facts about Dracula

Book News:
Over at the Fiction University I blog about the difference I experienced writing and publishing YA versus adult novels.

Quote of the Day:
“An idea that is not dangerous is unworthy of being called an idea at all.”
~ Oscar Wilde