The book read along for this month is Kat, Incorrigible by Stephanie Burgis. I hope many of you are enjoy it. It’s a new one for me too, so fingers crossed. Stephanie very kindly agreed to stop by the blog for an interview, and I though it would be fun to start off with that fro a change. Without further ado, plesae welcome Stephanie to the blog.

Tea or coffee and how do you take it?
Both, enthusiastically! And both very milky. I love Earl Grey (including the decaf version, which I drink at night) and I also drink one strong, frothy latte every day.

Describe your personal style for author appearances.
Casual-dressy. Or should that be dressy-casual? Unlike normal days (when I’m at home with my toddler), I actually brush my hair, put on a dress, and even occasionally wear make-up. Shocking!

If I were to observe the writer beast in its native environment, what surprising thing might I see? What does the environment look like?
When I was writing Kat, Incorrigible, I had a Jane Austen action figure standing on my desk for inspiration. Right now, I have a glittering dragon figurine instead. And you might be surprised by just how much dark chocolate is involved in the writing process…

If you drive, what do you drive?
Alas, I don’t!

No deviating: vanilla or chocolate ice cream on a plain or a sugar cone? (Gail will use this to determine your level of sanity.)
Chocolate, of course, in a sugar cone!
Gail interjects: she is entirely and perfectly wonderfully sane.

What’s most likely to make you laugh?
Episodes of the TV show Black Books.
Gail interjects: the first episode of Black Books may be the funniest thing ever put on the TV.  I actually lay on the couch laughing for about 20 minutes after it ended. The AB thought there was something seriously wrong with me.

Since writers inevitably end up in the bar, what’s your poison?
White wine, prosecco, or Bailey’s. (Ah, chocolate!) 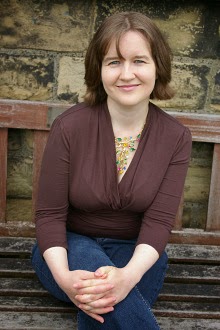 Stephanie Burgis grew up in East Lansing, Michigan, but now lives in Wales, surrounded by castles, mountains, and coffee shops. Her first book, Kat, Incorrigible (a.k.a., in the UK, A Most Improper Magick) won the Waverton Good Read Award 2011 for Best Début Novel by a British Children’s Writer. Along with the Kat, Incorrigible trilogy, she’s published a YA novella (Kat all grown-up and getting a romance of her own!), and her first adult historical fantasy novel is forthcoming from Pyr Books. http://www.stephanieburgis.com You can also follow Stephanie on Twitter.

What should readers eat while consuming your novel?
Dark chocolate. This can also be consumed in the form of rich, dark hot chocolate!

What form does evil take within its pages?
Murderous, aristocratic snobbery.

Which one of your characters would you most want to kiss and why?
Ooh, that’s actually kind of a spoiler. But I’ll say that it’s a man who seems very unlikely at the beginning of the novel but changes dramatically by the end of it!

What’s your favorite period in history and does it influence your world building?
I looooove Regency England as a playground, as evidenced by Kat’s setting! And I based a lot of the details of Kat’s family on Jane Austen’s own family, because I am Austen-obsessed.

Which one of your characters would you most like to slap and why?
Lady Fotherington, no question.

Without spoilers, what’s the funnest (or funniest) part of the book?
It definitely involves a highwayman!

If your story smelled of something, what would that be?
Raspberries and chocolate! 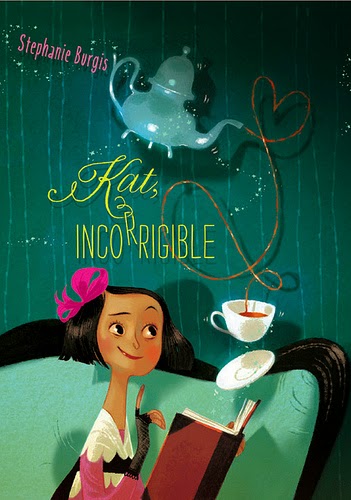 In Kat Stephenson’s Regency England, magic is the greatest scandal of all. But that won’t stop twelve-year-old Kat when she has highwaymen to battle, magical schemes to combat, and true loves to catch for both of her older sisters.

I hope we all enjoy this book, as Stephanie is clearly fabulous. If you’d like to join the book discussion on goodreads please feel free, or you my always leave comment here in the blog.

{What is Gail’s Book Group reading for January? Kat, Incorrigible by Stephanie Burgis}

Your Tisane of Smart . . .
A Little About Tarts

Your Writerly Tinctures . . .
The Line Forms Where? Knowing Where to Start Your Novel

Book News:
Sci-Fi Fan Letter says of Waistcoats & Weaponry, “As with the other books, the girls are all quirky and fun to read about. We see them apply their talents in different ways as they rise to the challenges they face.”

Quote of the Day:
“Children should not be brought to table till they are able to feed themselves, first with a spoon, and next with a fork. And not then, unless they can be depended on to keep quiet, and not talk. The chattering of children all dinner-time is a great annoyance to grown people.”
~ The Ladies’ Guide to True Politeness and Perfect Manners or, Miss Leslie’s Behaviour Book
by Eliza Leslie (American 1864)