So this month’s book group pick is Karen Memory by Elizabeth Bear. No sneaky reading ahead for me this time, it is totally new to me as well. I haven’t read a lot of Elizabeth’s stuff either. So why did I pick it? Frankly, I love the cover. 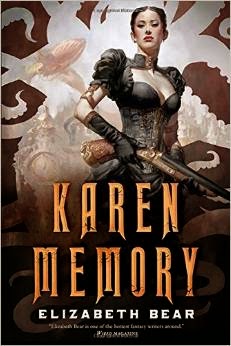 Also I hear nothing but good things about her work, she’s an awesome person, and the blurb looks right up my alley. Also I wanted to jump to something more adult and steampunk after last month’s read.

“You ain’t gonna like what I have to tell you, but I’m gonna tell you anyway. See, my name is Karen Memery, like memory only spelt with an e, and I’m one of the girls what works in the Hôtel Mon Cherie on Amity Street. Hôtel has a little hat over the o like that. It’s French, so Beatrice tells me.”

Set in the late 19th century—when the city we now call Seattle Underground was the whole town (and still on the surface), when airships plied the trade routes, would-be gold miners were heading to the gold fields of Alaska, and steam-powered mechanicals stalked the waterfront, Karen is a young woman on her own, is making the best of her orphaned state by working in Madame Damnable’s high-quality bordello. Through Karen’s eyes we get to know the other girls in the house—a resourceful group—and the poor and the powerful of the town. Trouble erupts one night when a badly injured girl arrives at their door, beggin sanctuary, followed by the man who holds her indenture, and who has a machine that can take over anyone’s mind and control their actions.  And as if that wasn’t bad enough, the next night brings a body dumped in their rubbish heap—a streetwalker who has been brutally murdered.

Bear brings alive this Jack-the-Ripper yarn of the old west with a light touch in Karen’s own memorable voice, and a mesmerizing evocation of classic steam-powered science.

The book actually doesn’t drop until tomorrow (Feb 3., 2015), but you pre-order now and it will wing its way to you shortly.

Here’s a fun interview with Elizabeth about the book if you want to know more.

{What is Gail’s Book Group reading for February? Karen Memory by Elizabeth Bear}

The Dogs Of Old London

Your Writerly Tinctures . . .
My local bookshop, Borderlands, is closing (Locus article). I will let you know how this effects my March 22 event. Likely it will be cancelled or moved. Right now, remaining Gail Carriger stock is signed, get it before it’s gone. Until I build a new relationship with a different local indy, there will be no way to order my books signed (except with at risk online special offers and from stores on my tour stops). I will try to fill this void as quickly as possible, but right now, I’m grieving. I ADORED Borderlands. They hosted my first author event. I met my first fan in those hallowed halls. They have been unfailingly sweet to every genre author I know. They were early, loyal, and HUGE supporters of my books. They will be profoundly missed. It’s unlikely I, at least, will ever have cause to visit that part of San Francisco again. Shame.

Book News:
The Tentacle & Treacle site has been revamped.
To celebrate the lovely new appearance, we are giving away a signed advanced copy of Prudence, and a signed copy of my cookbook, A Feast of Ice and Fire.
To enter the competition, you must complete the following steps:
1) Visit the shiny new website, and sign up for the monthly newsletter (scroll down for sign up box). New recipes, household hints, and how to seat a vampire and a werewolf at the same dinner party.
2) Comment on the giveaway Facebook post with your favourite food item from the Parasol Protectorate.

The winner will be announced on Tentacle & Treacle on February 8th. Regretfully, this competition is only open to those in the continental United States. 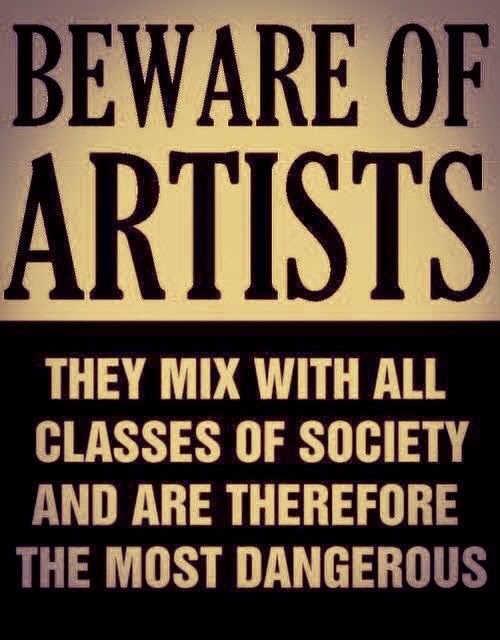