Character Story Poll Results ~ Which Side Character Would You Like to Star in their Own Story?

At the beginning of the month, I asked you, Gentle Reader, which side character you would like to see star in their own story. Fascinating results my dear Gentle Reader, absolutely fascinating. 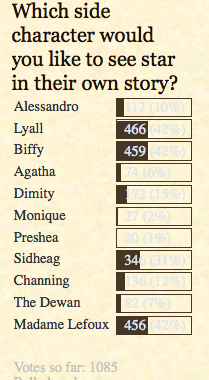 Blogspot’s percentages are all over the place (likely because people could vote from more than one character at a time). Livejournal is a super pain to work with as a platform, but their blog-internal polling widget is not to be sneezed at. Far superior. However, you can see the results in both venues were pretty similar. Ah, demographics.

The final ranking results were as follows:

Mostly things fell out as I expected. Not to be cocky… but you think I don’t pay attention to the forums and in Q&As? I know who you love… Although I will say, Sidheag was a surprise. I had no idea she was such a popular character.

There were some interesting side suggestions as well. Of course, many mentioned Lord Akeldama. I left him off the list intentionally because I didn’t want him to distract from the other characters. He is nothing if not distracting! Soap, Ivy, Felix, and Pillover were commonly requested as well. I have reasons for all four of these omissions. It would be spoiler-ish to say why.

A few commenters specified time lines: Lyall’s origin story (I’ve never thought about this, it would be fun), Ivy as a baroness, Sophronia as a working adult. One wanted to know about Dimity’s parents. (I hadn’t even considered them. But what a wonderful idea for a evil genius star-crossed lovers story, and it would have a regency setting!)

You see? This I why I do this. So many fun things to think about. You guys are constantly leading me towards further insight into my own characters. It’s awesome.

Does it mean there is an immanent Lyall/Biffy short on the way? Nooooooo. But it means it jumped higher up the queue. No promises on timelines until I get Imprudence roughed out and a few other 2015 projects socked away. But 2016 should be fun. Thank you for taking the poll, you have made it that much funner.

{What is Gail’s Book Group reading for Febuary? Karen Memory by Elizabeth Bear, read about its inception from a conversation and a YA proposal, and glorious hair. Or here is another one on Suvudu} 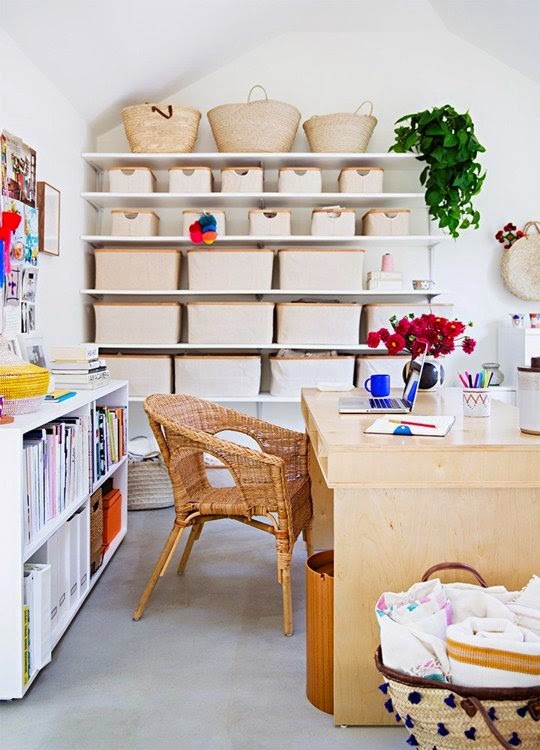 Your Writerly Tinctures . . .
Who’s Running Your Writers’ Group? Why You Should Be Careful 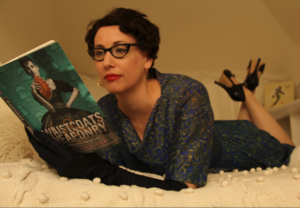 “I am still loving this series. It’s fun, it’s creative, and it’s completely engaging. … I got a real kick out of all the situations they would find themselves in, the twists and developments, and especially the witty dialogue.”