April’s book pick, The Eyre Affair by Jasper Fforde, was a re-read for me. I loved it when I first picked it up and remember giggling the whole way through. (It was passed over to me by the Mum, of all people. We do not, normally, share the same taste in literature.) It has a charming irreverent take on… well… everything from literature to history. It’s set in an alternate reality where literature is, if not kind, at least very very significant. 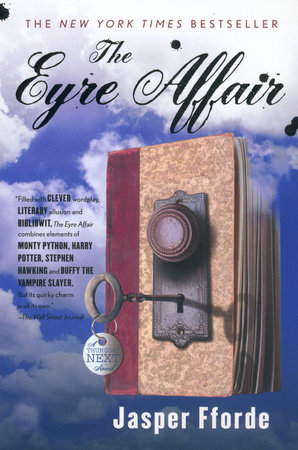 Anyway, I’m a big fan of Jane Eyre—all that mad gothic action and swooning and flames, so I love this book for how it interweaves and pays homage to the original novel. However, this time reading The Eyre Affair I was struck by how much I didn’t understand about what Fforde was addressing.

I began to realize that while I got many of his historical jokes, other literary ones were zinging right over my head. I was an archaeology major in college and while I chivvied in some European Bildungsroman and a Gothic lit class or two, I never had more than a high school grounding in British literature. Now, I did go to a very good high school, but still I just didn’t grock a lot of the stuff about Milton and whatnot. This time around, I was struck, pretty consistently, by all the jokes I must be missing because of what I don’t know. It made me a little sad. Nothing can take away from the world building, though, that is pretty stellar. (Eh, see what I did there? World building = stellar. Oh, never mind.) I also was left with the sinking suspicion that Fforde may, actually, be a genius.

I’d forgotten the bit about Wales being all fierce and evil. So fun. There is a great deal more social commentary in this book than I realized on the first read. Or perhaps, being a more experienced comedy writer myself now, I recognize this more in other writers?

All-in-all, the re-read was enjoyable but not so hilarious as the first time.

The monthly read along for May is The Outlaws of Sherwood by Robin McKinley. I haven’t read this book since college. I do remember it being quite sad, so get ready for that. Nevertheless, I look forward to the re-read. I checked and it seems to be readily available in both paperback and eBook.

“Robin Longbow is a sub-apprentice forester in Sherwood Forest, barely eking out a living-and barely able to control his temper when he is confronted by the taunts of the Chief Forester’s favorite. One careless shot, and he has killed the man. From then on, Robin is on the run-but he is not alone. Joined first by his friends Much and Marian, then by more and more people who despise the Norman lords who tax them blind, Robin builds a community of Saxon outlaws deep in Sherwood who risk the gallows and the sword for the sake of justice and freedom.”

I remember loving many things about this book but it was the secondary characters, specifically Will, Cecily, and Little John, who I loved the most. I hope you guys like them too.

I have only one complaint at the get-go, and it’s one I have with all Robin Hood retellings. I lived for several years in Nottingham. Yes, that Nottingham. And the place is well known by locals (and archaeologists) for the extensive series of sandstone caves that honeycomb through and under the city. Many houses have sandstone basements, and many off-licenses crawl back into the ground using the caves for their cellars. Yet no retelling I have ever read includes this fact. The caves seem to be something any outlaw would make good use of. And yes, they existed in Medieval times.

Oh and for you geeks out there, Wollaton Hall in Nottingham was the filming site for the exterior of Wayne manor in the Dark Night Rises.

Quote of the Day:
“The story is always better than your ability to write it.”
~ Robin McKinley