Mangnall’s Questions were well known in their day, Gentle Reader and I had a blast reading them myself for research. 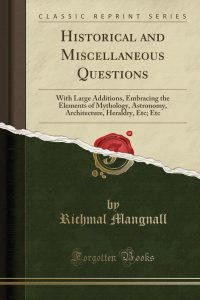 The 1830s volume was designed for young ladies to read in order to educate themselves to converse properly in polite society. One section is all about famous people. The style in which the descriptions of these people is written is hilarious.

It got me thinking, what if Mangnall wrote my author bio?

“Scarron, a French comic poet, born at Paris, 1610; died, 1660. Famous for his humour and pleasantry of manners. The celebrated Madame de Maintenon was his wife, and, upon his decease, engaged the affections of Louis the Fourteenth, who privately married her. Scarron’s works are numerous. He had a vigorous mind, in a small and deformed body.”

“Zimmerman, a Swiss, born at Brug, 1728; died, 1795. Physician to George the Third at Hanover. He was well read in history, the belles-lettres, and general literature: few men have shown a more original turn of thinking. His pleasing manners, and amiable disposition, attracted many friends; his excellent understanding, and liberality of mind, secured them. Zimmerman was eminent in his profession. His Treatise on Solitude is alone sufficient to secure him name from oblivion: in exhibits, besides, a fair transcript of the author’s mind. He published several other works; among which is a Treatise on Irritability.”

~ Mangnall’s Questions, 1830
(One wonders what Mangnall might say about herself?)

~ Mangnall’s Questions, 1830
(And you thought my names were silly.)

“Carriger, a comic writer from the Colonies, born in squalor, 197?; died, ?. Famous for her outrageous characters and questionable inclination to dandify. The celebrated Chubbiest of Foqoures was her cat, and, upon said cat’s decease, Carriger engaged the affections of Lilliput la Pumpkinpucci. Carriger’s works are numerous. She had a peculiar mind, in a top heavy body.”

Your Tisane of Smart . . .
Women swimming the Thames

Your Writerly Tinctures . . .
A little known hack from Japan to get your notebook organized

“Gail Carriger develops a cast of amazing characters that will leave you wanting to know more about them. We recommend this book and series with a resounding YAY!”

Quote of the Day:
American writes about the British in 1872.

“A lady correspondent thus writes from London: –
I have been obligated to partly re-learn the English language. Words here do not always convey the same meaning as in America. There are no railroads, but ‘railways;’ no depots, but ‘stations;’ no firemen, but ‘stokers;’ no cars, but ‘carriages.’ There seem to be no buggies in England. There are not stores, but ‘shops.’ Neither an inn nor a public house is obliged to entertain travellers with other accommodations than beer or spirits. To be fed and lodged one must go to a tavern or hotel. When you ask for beer, they give you porter. Lager is unknown. There is no washing and ironing, but ‘washing and mangling.’ Beans are known as ‘haricots’ (the plebeians term them ‘aricots.) The word corn stands for most any kind of grain. There is not Indian meal, but ‘corn flour.’ A streak of sunshine once an hour constitutes a ‘fine day.’ No street cars, but ‘tramways;’ no pitchers, but ‘jugs.’ Muslin is called ‘calico.’ There is no broiling, but ‘grilling.'”