Today, Gentle Reader, the Occasional Meeting Intellectual Salon (OMIS) welcomes the glorious Kate Elliott to this blog. Kate is the esteemed author of this month’s book pick and I invited her ’round to give a presentation on the research behind Court of Fives. 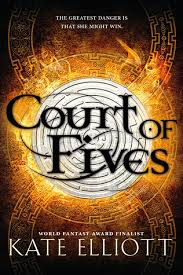 You likely know that my former profession was archaeologist. Although Egypt was not my specialty, I did work in an Egyptian museum for five years and Ancient Egyptian culture has always been one of my passions. I know that you, Gentle Reader, must have an interest in history or you wouldn’t really like my books. So naturally I figured this would be an excellent subject for the Intellectual Salon.

Take it away, Kate…

When I think of ancient Egypt, I think first of mummies, pyramids, pharaohs, King Tut, and the amazing tomb and temple paintings that have survived millennia.

Consider this Isis with wings from a tomb painting. So glorious.

In the Western world, ancient Egypt has long been famous and revered as one of the great civilizations of the past. It was considered old to the scholars and writers of classical Greece and Rome who explored and wrote about it, and who named the Great Pyramid of Giza as one of the Seven Wonders of the World. Later, in early modern Europe, Egyptian motifs became popular in interior decoration and building styles. The discovery of the Rosetta Stone in the early 19th century–an inscription in three languages–led to the modern decipherment of hieroglyphics, which allowed scholars to translate the inscriptions and texts of the Old and New Kingdoms. Egyptian archaeology became all the rage, especially after the 1922 excavation of the nearly intact tomb (and gold treasures) of King Tutankhamen by Howard Carter and the Earl of Carnarvon.

So when my spouse and his co-director received the concession (permit) from the Egyptian Supreme Council of Antiquities to work at the site of Tell Timai, I was both excited and a tiny bit disappointed.

Tell Timai has no pyramids or massive, monumental statues.

I love these Ramses II statues at Abu Simbel. This guy did not have confidence issues:

In fact, Timai became important long after the Old and New Kingdom Egypt famous for its monumental architecture and elaborate tombs. In the aftermath of the death of Alexander the Great, one of his generals (Ptolemy) established himself as king of Egypt, taking on the title of pharaoh as well. He established the Ptolemaic Dynasty, named after himself, and ushered in the Greco-Roman period when Egypt was ruled first by Macedonian kings and queens and later by Roman overlords. Timai became a regional capital at this time, and remained important as an administrative center for centuries.

But because I often help my spouse by proof-reading his abstracts and conference talks, I began to absorb some of the history and archaeology and I became intrigued by this cosmopolitan period of history when people moved around the Mediterranean Basin with remarkable freedom. I had studied the Hellenistic Period (as this era is called) in college, and had found it fascinating then, but moved on to other historical obsessions since. However, the more I learned about Ptolemaic Egypt, the more I began to see the cultural interaction of that time as fertile ground for a fantasy setting.

Here are five things that influenced the writing of Court of Fives.

One: The Soldiers and the Wars

A Ptolemy I coin, wearing a diadem to mark him as ruler of Egypt, with an eagle grasping a thunderbolt on the reverse side:

Once Ptolemy established himself as ruler, many Macedonians and Greeks flocked to Egypt to make their fortune and to serve in his army. The life story of Jessamy’s father is directly inspired by this.

Ptolemy and his descendants fought multiple wars against other post-Alexander kingdoms established by former generals, including at least six against the Seleucid Empire to the east (where Israel, Jordan, Syria, Iraq, and Iran are now). The description in Court of Fives of ongoing wars after the breakup of the Saroese empire is modeled after the on-and-off again wars following the death of Alexander the Great and the breakup of his short-lived empire.

Wow, those Ptolemies were unpleasant people though. The dynasty lasted 175 years, and during that time the various descendants connived and murdered with an “anything goes” mentality that is almost impressive if you don’t think about how awful they could be. While they did make marriage alliances with other kingdoms, they were particularly infamous in the larger Greek world for a string of brother-sister marriages that allowed them to tightly hold on to power within their family.

Here is a romantic portrait of Berenike II, who had soldiers kill her first husband, Demetrius the Fair, when she discovered him sleeping with her mother Apama. She promptly married her cousin, Ptolemy III. After the death of her husband, she was murdered by her son, Ptolemy IV, who by the way married his sister Arsinoe III. I can’t make this stuff up.

Late in Court of Fives, Kalliarkos makes a brief speech about the terrible behavior of the princely classes toward each other, and every example he glancingly mentions is based on a real incident that happened somewhere during the Hellenistic period.

During the Ptolemaic Period there were two separate legal systems. One followed Greek law. It was imported into Egypt and set into place by the new rulers, and all its proceedings took place in Greek, the language of the conquerers. In this legal tradition, for example, women could only be represented in court by a male guardian. However, although indigenous Egyptians were clearly second-class citizens in Ptolemaic Egypt, a parallel Egyptian tradition carried on alongside the Greek legal tradition, for Egyptians dealing among themselves, and those court documents were written in Demotic, a late written version of Egyptian. Women could represent themselves in the Egyptian legal tradition.

Here’s an example of Demotic:

I borrowed both the idea of women’s inferior legal status in Greek culture and that of women having a more equal legal status in Egyptian culture by making the Saroese culture very regressive about women while the Efean culture, what you see of it, is suggestively much less sexist.

By the way, the Romans were much harsher rulers than the Greeks. After Rome made Egypt into a province of the empire, for a while it really was against the law for a Roman citizen to marry an Egyptian. I stole that directly for the book.

However, speaking of women, here’s a really interesting thing about Ptolemaic Egypt and in fact the whole Hellenistic period. The only Ptolemaic queen we tend to hear about is Cleopatra VII, infamous for her sexy wiles and unwomanly ambition.

But Ptolemaic women took an early and important role in ruling Egypt, in becoming patrons of the arts (important for propaganda purposes), and in controlling the royal treasury and other acts of public largesse. Even though women had a clearly inferior legal status to men under Greek law, that didn’t stop these women from ruling as influential co-queens, as regents for children, and in several cases alone, and in fighting tooth and nail over the throne with their brothers and uncles.

Many royal inscriptions mention both king and queen, as if they are equal partners, which means that even if they were not in actuality it still suited the purpose of the royal household to be seen as such by those they ruled.

For example, Arsinoe II had a tumultuous career. She ruled as queen twice, first of Thrace and Macedonia through marriage to Lysimachus and later as co-ruler of Egypt with her brother Ptolemy II. Deified after her death, she was identified with the horn of plenty and had temples built around the Mediterranean to her in her aspect of patroness of travelers, a divine quality she borrowed from Isis. In fact, at Tell Timai a statue of the divine Arsinoe II was found as part of a temple dedicated to her that once stood in the city.

From the Met, here’s a statue of the deified Arsinoe II, with cornucopia. Notice the blend of Greek and Egyptian stylistic traditions. This statue is similar to the one found at Tell Timai (the one at Timai lacks arms and head).

In tribute to these remarkable (and ruthless) women, I gave Efea a tradition of co-ruling kings and queens.

Five: The Battle of Raphia

Remember Arsinoe III, Ptolemy IV’s wife? In 217 BCE she famously accompanied her brother into Syria to fight the Seleucid emperor Antiochus III, and in the Third Book of Maccabees is said to have been crucial to the Egyptian victory at Raphia by exhorting the army to fight when it was wavering. She also wisely promises to give each man 2 minas of gold if they win the battle.

Here is a stele that shows Ptolemy IV on horseback at the battle with Arsinoe encouraging him on.

Raphia proved to be a great victory for Egypt, and the high point of Ptolemy IV’s reign (he was later assassinated and his infant son raised to the throne by “loyal advisors”).

There’s another interesting tradition about the battle of Raphia that comes from the Greek writer Polybius. He claims that Ptolemy IV “by arming the Egyptians for his war against Antiochus, took a step which was of a great service at the time” (that is, in order to have enough troops to fight the enemy). For a long time this comment was interpreted as meaning that, under the earlier Ptolemies, Egyptians were not allowed to serve as soldiers (an interpretation many scholars no longer agree with). Certainly after Raphia there seems to be an increase in Egyptian influence in administrative matters in the kingdom, and there were other consequences too (which I won’t go into here), but for the purposes of Court of Fives, I used this suggestive tidbit as part of the backstory of General Inarsis and, indeed, as a way to show the very unequal social stratification between foreign rulers and conquered indigenous peoples.

My husband is still working at Tell Timai (five weeks every summer), and even if the site doesn’t have pyramids and mummies, what it does offer is a window into a unique period of Egyptian and Mediterranean history filled with all the best kinds of story seeds that any writer could possibly desire. I can’t wait to show you all book two, in which a whole new set of seeds gets to bloom.

For now, I leave you, Gentle Readers, with thanks for reading this rather long post, and with a cool photo of Tell Timai from the air:

Wow! Thanks Kate so much for this. It’s utterly fascinating; I now find my own poor attempts to reflect 1890s Egypt rather inferior. But then, I felt that way reading Kate’s book.

I hope you all are enjoying Court of Fives, and that if you haven’t already picked it up that this insight will encourage you. Really. So. Good. As a reminder I am running a giveaway of Court of Fives, Waistcoats & Weaponry, and the Beka Cooper series by Tamora Pierce through September 13. 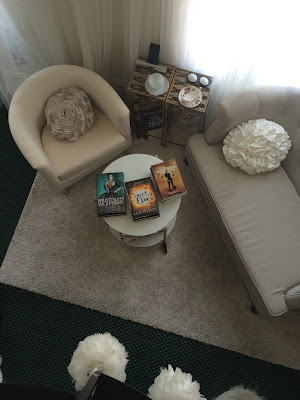 Your Infusion of Cute . . .
15 Most Creative Books from Past and Present

Your Tisane of Smart . . .
Survey finds Millennials Most Irked by Bad Grammar and Spelling Slips 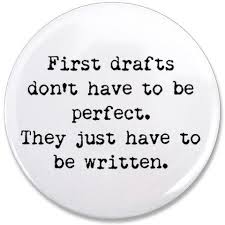 Book News:
Stacy of Lost in Librolandia says of Timeless: “There is just so much to love about this world and the characters that Carrgier has created within it. …I want to jump through the pages of these books and stay in this picturesque, Steampunk, Victorian wonderland forever.”

“The only way to atone for being occasionally a little over-dressed is by being always absolutely over-educated.”