Today, Gentle Reader, we have a guest author interview on the blog with Jaime Lee Moyer. I am constantly getting questions from readers about what to read while waiting for my next book. So I have invited Jamie by for tea and a chat in the hopes that she may help fill in the gap. Please give her a big warm welcome. 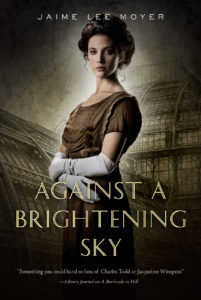 Tea or coffee and how do you take it?
Spiced tea (cinnamon and orange) with sugar.

Describe your personal style for author appearances.
Very casual and chatty. I’m not a formal person.

If I were to observe the writer beast in its native environment, what surprising thing might I see? What does the environment look like?
I just moved. My new environment is an apartment living room, with a big oak desk, surrounded by bookcases. One of the deep shelves in the desk has been transformed into a cat cave for Morgan and Gillian, my co-authors. Surprisingly, the cat cave is lined in Wonder Woman fleece.

No deviating: vanilla or chocolate ice cream on a plain or a sugar cone? (Gail will use this to determine your level of sanity.)
Vanilla on a sugar cone.
(Gail pronounces you sane with minor aberrations.)

What’s most likely to make you laugh?
Something unexpected and absurd.

Since writers inevitably end up in the bar, what’s your poison?
Kahlua with cream 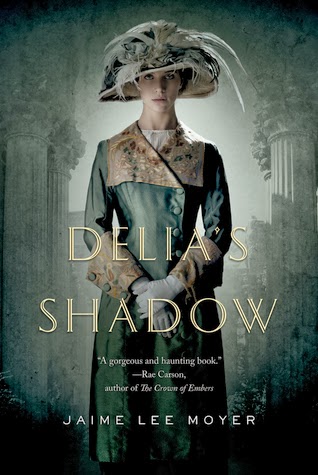 Jaime Lee Moyer lives in a land of cactus, cowboys, and rhinestones, while dreaming of tall trees and the ocean. She writes novels about murder and betrayal, friendship, ghosts and magic, and she feels it’s only fair to warn you that all her books are kissing books. You can learn more about her at jaimeleemoyer.com and read excerpts from her new novel Against a Brightening Sky.

What should readers eat while consuming your novel?
Strawberries, cookies, and tea.

What form does evil take within its pages?
Murder in all sorts of horrible incarnations.

Which one of your characters would you most want to kiss and why?
Police Captain Gabriel Ryan. Gabe has the soul of a paladin, feels duty bound to find justice for those who can’t find justice for themselves, and is pretty much my vision of a perfect partner.

What’s your favorite period in history and does it influence your world building?
The years between 1910 and 1920 are my favorite. So much happened during those years, including WWI, the beginning of prohibition, women’s suffrage, and the flapper era. Spiritualism and séances were popular forms of entertainment. Almost everyone believed in ghosts, in spirit guides, and that mediums could communicate with the dead.
For someone writing about murders involving ghosts and other supernatural creatures, a 1910s version of a witch and her police detective husband, it was the perfect time period. Not only was it a rich period in history, but I could toss in all kinds of magic and weirdness and it “fit.”

Which one of your characters would you most like to slap and why?
I don’t slap people, but there’s one character that deserves a good shaking; Libby Mills. Mainly because she is so rooted in certainty that her own version of what reality is and should be is right. Libby can’t see the truth standing right in front of her.

Without spoilers, what’s the funnest (or funniest) part of the book?
Sadie Fitzgerald’s attempts at matchmaking between Sam and Libby.

If your story smelled of something, what would that be?
Paraffin, sage, and rosemary–for remembrance. 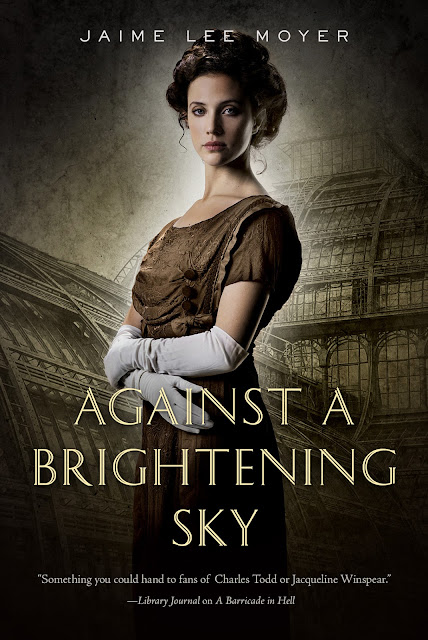 Against a Brightening Sky

A ghost princess and a woman with nothing but a name to her fortune might change the course of history.

By 1919 the Great War has ended, peace talks are under way in Paris, and the world has been forever changed. Delia Martin, apprentice practitioner of magical arts, and her husband, Police Captain Gabriel Ryan, face the greatest challenge of their lives when fragments from the war descend on San Francisco.

As Delia prepares to meet friends at a St. Patrick’s Day parade, the strange ghost of a European princess appears in her mirror. Her pleasant outing becomes a nightmare as the ghost reappears moments after a riot starts, warning her as a rooftop gunman begins shooting into the crowd. Delia rushes to get her friends to safety, and Gabe struggles to stop the killing—and to save himself.

Delia and Gabe realize all the chaos and bloodshed had one purpose—to flush Alina from hiding, a young woman with no memory of anything but her name.

As Delia works to discover how the princess ghost’s secrets connect to this mysterious young woman, and Gabe tracks a ruthless killer around his city, they find all the answers hinge on two questions: Who is Alina…and why can’t she remember?

Your Infusion of Cute . . .
Mollusk Mosaics

Your Tisane of Smart . . .
The Overlooked Purslane 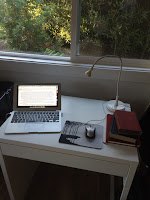 Modifying a desk on writing retreat.

Quote of the Day:
“The curves of your lips rewrite history.”
~ Oscar Wilde, The Picture of Dorian Gray