It’s strange how long it take me to really be back from a book tour, Gentle Reader. I mean back back, mentally as well as physically. Anyway I am, and I had a lovely time. Paced myself a bit with fewer events than usual, not sure it quite worked because in the end, as Mum put it, travel is travel and that’s exhausting. 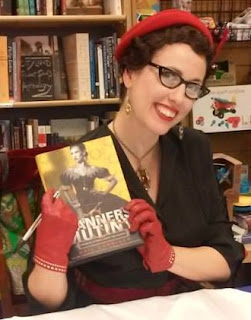 I chose red and black outfits for this tour, since I don’t wear yellow. But I think it complemented the book cover pretty well. I’ll be blogging over on Retro Rack about all the outfits if you want to know more. 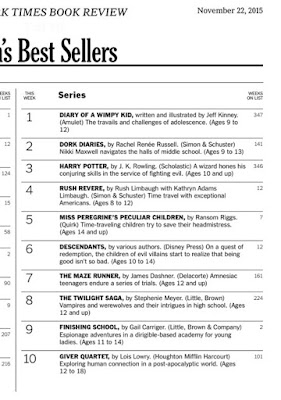 There she is, Manners & Mutiny, on the Children’s Series Best Seller list at #9. The series list is a notoriously difficult nut to crack so I am eternally grateful to everyone who ordered for their school or library, pre-ordered online or at their local brick & mortar, and took the time to buy during the first week on sale. It really does mean a lot to me, and better, it means the publishing house looks on me with favor which means… for you… MORE BOOKS.

Some Quick Tour Highlights for You

Books Inc, Opera Plaza in San Francisco is always a fun time. Lovely turn out from my local crowd on a cold Tuesday night. 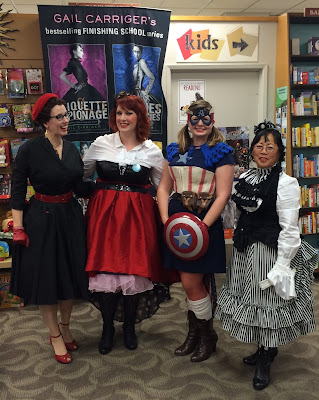 I wore my favorite black coat dress with red piping and multiple petticoats, none of these pack well so I rarely bring them on tour. Thus, this was the perfect outing. That’s the NYCC banner from Little Brown’s booth behind our heads. They sent it to me! Isn’t that cool?

After Books Inc I hit the road, or the airways, as it were. I ghosted into World Fantasy, wasn’t officially attending as I was mostly in town for my signing and to see friends and colleagues.

Northshire Books in Saratoga Springs is the kind of bookstore that feels like it’s been there forever, when in fact it’s only a few years old. They were very welcoming and we filled the cafe. Even a few of my fellow authors showed up (frankly, we rarely attend to each others events) which I found charming. 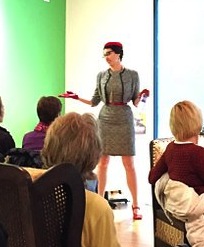 Peter V. Brett took this picture of me. How many of us get to claim that kind of accolade? In other news, one lovely young lady, Eva, asked that her birthday present be to visit me. So she and her dad flew all the way from Wisconsin to Saratoga Springs for my signing. Isn’t that amazing? I’m her favorite author! It’s basically a dream come true for me. 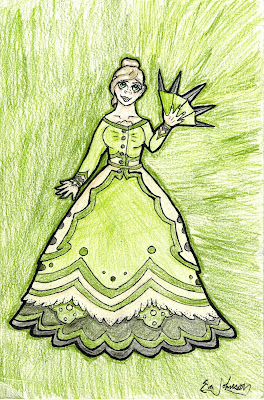 She drew this fan art for me as well. I always say that I write to be someone’s favorite author because I know what it’s like to have them. So that’s it, I’ve done it. I got to meet myself, in a strange way. I’m so honored. Thank you, Eva.

Porter Square Books in Cambridge is a new bookstore for me. Last time I was in town I was at Pandemonium. Turns out my dear friend Adam Christopher was at Pandemonium at the SAME TIME I was at Porter. Battle of the authors! If you’re inclined toward robot noir you should check out his book, Made to Kill. He had Max Gladstone at his event, though, so… jealous. We all went out for drinks after, because, why not? All good author battles end with alcohol. 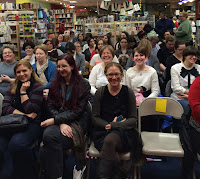 At this event I was presented with the most amazing character cookies made by a fan. So stunning. And, as I found out later, delicious. I have the most talented and amazing readers in the whole world. The cookies (well, the ones I didn’t eat) came with me to YallFest and were presented unto the first fans in my signing line on Friday. The Loontwill Sisters were picked first. Somehow, I’m not surprised. 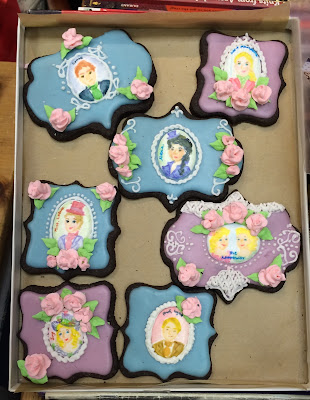 I spent a little time in Boston after tha., I have a number of college friends around the area and it was a chance to get caught up, gossip, go vintage shopping, plan future shenanigans. You know. 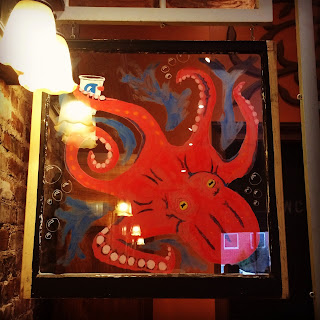 Then it was off to YallFest in Charleston, which is crazy, intense, glorious, and utterly exhausting. 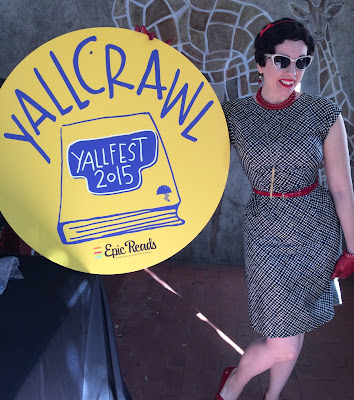 Friday I participated in Yall Crawl, a kind of mass signing that takes place all over the city. I wasn’t expecting many but I had a whole line of people waiting. Amazing! 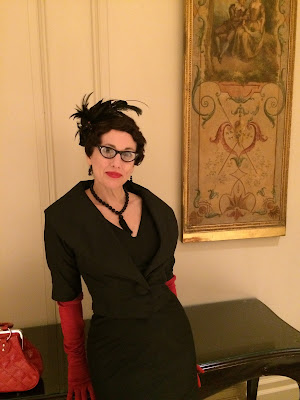 That night I found a shepherdess tapestry in the hotel that Lord Akeldama would approve of, scooped up my dear friend Lauren Harris, and went off to the author mingle where there were AH-MAZ-ING collard greens (I love them so) and lots of fantastic authors including one of the greatest of us all, Mercedes Lackey. Here’s the kicker, she spotted me… and knew who I was… and likes my books… it was pretty much the greatest thing EVER! Her books still take up the most shelf space on my bookshelves. Could we just pause and talk about the vital ground breaking importance of The Last Herald Mage series? So so many of us had no idea you could write a LBGT character until we read that series. Not that we didn’t want to or it wasn’t allowed, just that we didn’t even register that it was possible in fantasy. Yes, there were others before her, but she was the one we all read. Us, the girls who loved horses and fantasy and magic. We owe her a lot. And in person, she’s totally cool, and charming, and fabulous. How marvelous is that?

Ah-hem, just a minor fan girl moment there. Now where was I? Oh yeah, no evidence exists of this meeting because I was too busy being delighted. Lauren witnessed it though, so it wasn’t a dream. 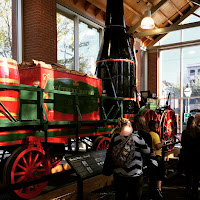 By request, me with the Splendifereuous Courtney.

Next day I had a two panels, a signing at a train museum, met more famous authors than one can count on two hands, and played Vanna White in a game of YA Hollywood Squares. Which pretty much sums up the oddness that is the YallFest experience. 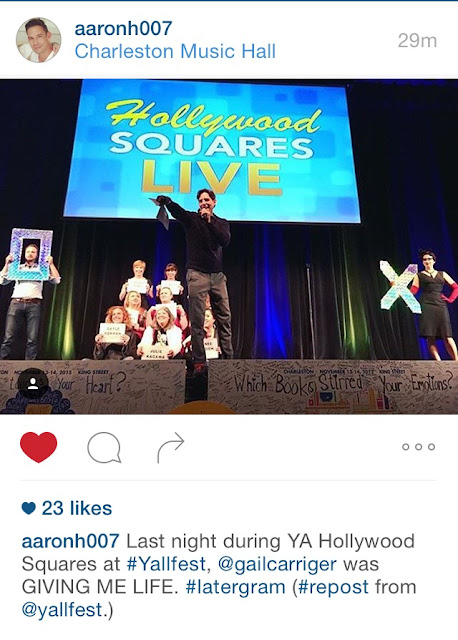 Yes, I wore my red opera gloves. Whatcha take me for, an amateur? 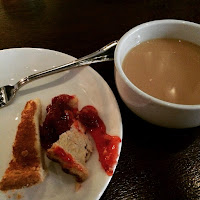 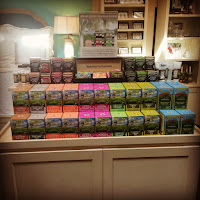 The rhubarb strawberry was much less impressive than the buttermilk and the tea.

Charleston was charming. I discovered the joy of buttermilk pie, local tea, and the open air market. To my ever increasing joy kale salad was everywhere. I love kale salad. I know, but I do. 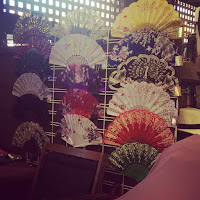 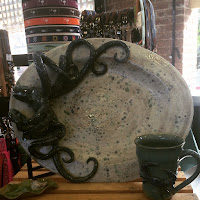 Fans & octopodes at the market

Then it was home to a flurry of lapsed emails, appointments, and next year’s travel decisions. Also a very happy cat and AB, both of whom were delightfully affectionate.

Your Tisane of Smart . . .
As American as Iced Tea: A Brief, and Sometimes Boozy History

Your Writerly Tinctures . . .
“Talent without discipline is like an octopus on roller skates. There’s plenty of movement, but you never know if it’s going to be forward, backwards, or sideways.”
~ H. Jackson Brown, Jr. 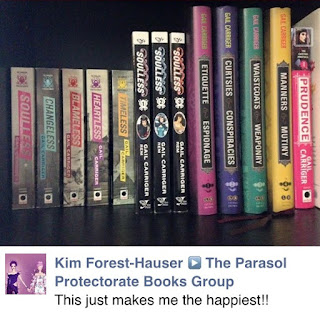