Imprudence Up For Preorder & Has An Official Release Date (Custard Protocol)

Finally, I can officially announce that Imprudence has a Release Date! July 19th, 2016.
It’s oddly appropriate that this particular book has a summer release as it takes place over the hot deserts of Africa. My proper Victorian characters (OK, less proper than previous) rather object to the climate. Hilarity and hoopla ensue. 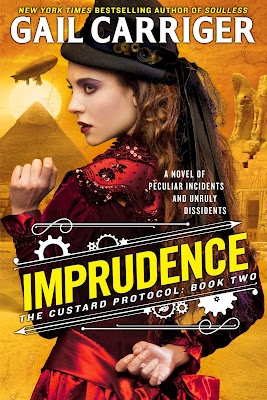 But Miss Gail, Amazon UK/Aus/NZ (Kobo, B&N, Smashwords, Big Name Blogger Book’s All’Mighty Boof, etc.) has a different release date. Does that mean we get it earlier?
Nope. July 19th is the earliest you can expect Imprudence. All others are LIES. Aus./NZ is usally 2 weeks after that.

What about the audiobook?
Should release around the same time. I make no promises about the UK – your audio approval system is notorious. You didn’t know that? Well it is. Aus/NZ you’re worse. It can take a month or more. Not my fault.

Did you manage to work in the sexy red dress on the cover of Imprudence?
Why yes, yes I did. And a certain young man of Rue’s acquaintance likes it very much. 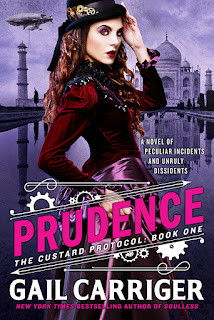 Will this one be better copy-edited then the first edition of Prudence?
God, I hope so. At least the US print run is supposed to have a second pass copy edit and I have promised to carve out extra time to review, but sometimes, in publishing, there comes a fine line between another pass and making the release date on time. The publisher will sacrifice all on the altar of making that date. I anticipate your critical emails with baited breath.
On the bright side, we got those flaws fixed by the second edition of Prudence so those of you who have the first, really do have a special and unique collector’s edition of Prudence.

“However, spilt milk blows nobody any good, and it is useless to dwell upon it.”
~ Right Ho, Jeeves by P. G. Wodehouse

Will there be a paperback edition of Prudence?
Yes. My guess is early February, but it hasn’t been confirmed.

How about mass market editions of the Custard Protocol or the Finishing School books?
Nope. It seems that publishing in general is phasing out mass market. The general opinion being, that most MM readers have moved to digital. True or not? Truth is irrelevant in publishing, remember the part where we write fiction? You can argue with the tide all you wish, but it’s going to carry you out to sea. Better hold on to those Parasol Protectorate Mass Market editions as they are now collectors items. There will be no more printed. 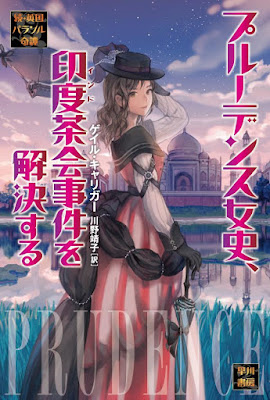 Your Tisane of Smart . . .
Previously Unknown Edith Wharton Short Story Found – Where Else? – In A Library

Your Writerly Tinctures . . .
“All a publisher has to do is to write cheques at intervals, while a lot of deserving and industrious chappies rally round and do the real work.”
~ Carry On, Jeeves by P.G. Wodehouse

Quote of the Day:
“This stuff isn’t booze,” she said, after a few moments. “It’s a religious experience.”
~ Debra Doyle & James D. Macdonald, The Price of the Stars