Newt’s Emerald was just as much fun on the reread as it was the first time I read it, Gentle Reader. There is something so light and easy about this book. This is a bit of a shock from Mr. Nix. Not that his necromancer YA is labored, just that it is, by necessity given the subject matter, weighty. (Still, I recommend it if you like that kind of dark well-done fantasy. Just don’t go in expecting anything like Newt’s Emerald.)

While I like the cover well enough, as covers go, I do think it does this particular book a disservice. It’s not going to find an eager New Adult or YA market. Nor will it draw in any romance readers with this style of art and price point. In fact, I’m hard pressed to think what market the publisher thinks this cover targets. Perhaps they were after Night Circus readers, but why? The books aren’t at all alike. Regardless, it’s a pity, as I think Newt’s Emerald could do very well with YA, New Adult, and Romance readers. I can only hope with the paperback they change up the cover and that love for this novel spreads. I’d suggest something like the cover of Glamour in Glass by Mary Robinette Kowal. Not that anyone is asking at me, but they might try a different title too ~ one with better keyword action.

Now, let us put aside the things over which the author (self or the admirable Mr. Nix) has very little control (at least in this instance) and move on to story and writing. It’s brilliant, my dears, just brilliant.

“By the time Truthful had carefully put away her ensorcelled moustache, soaked in her lemon verbena-scented bath, slept for an hour, and dressed in a charming walking dress of green crape with puffed sleeves embellished with silver knot-ribbons, she felt much better.”

I should just like to say that Ensorcelled Moustache is the name of my dub-step meets opera cover band.

“Out of my way, spider-shanks! Fellow with calves like that shouldn’t be seen in knee breeches.”

So right, this is me, all the quotes I pick are going to revolve around clothing. Can’t be helped. Spider-Shanks indeed. Might be my second favorite insult after Poodle-Faker. (All the best insults have hyphens. Incidentally, that’s the name of Ensorcelled Moustache’s first hit single.)

All in all, I felt the story, the characters, and the romance all rubbed along together in a topping manner. It reminded me of my youth spent smuggling illicit regency romances to read on the beach, meets Sorcery & Cecelia. And anything that reminds me of my youth plus a favorite book must be praised.

The character of Lady Badgery greatly intrigued me. I should dearly love to read her story some day.

“As to the impressive score of deaths that may be laid at my door, they all occurred in the six years I lived as a man, in the Army, as a lieutenant to my beloved Badgery. All were in battle, you understand. Oh, there was one duel, but that was an accident.”

“Hasn’t Parkins been with you since you were married?” she asked.
Lady Badgery smiled again. “Sergeant Harkins she was in those days,” she said. “She had the most remarkable beard. I wonder if she still has it?”

Meanwhile, if you are at all inclined, please give this little gem a review? Newt’s Emerald could very much use the boost. And if you want to read something similar go get Sorcery & Cecilia, last I checked the ebook was listed for sale in the US at only $1.99. (Although if you have been having around me for any length of time, you likely already have it. I am constantly pimping it.) 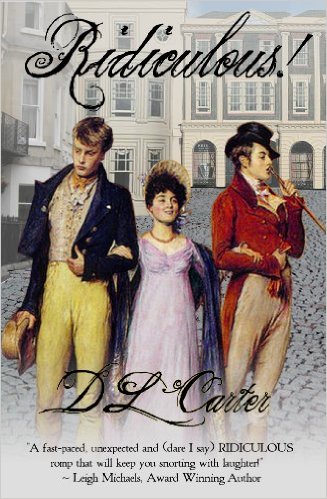 I found Ridiculous by D L Carter a frivolous but very fun regency romance. It has more sexy-times than normal in such books, and a whole lot of pining girl disguised as a boy a favorite trope of mine. Also it is really quite funny. I laughed out loud at least a dozen times.

Again, it has a pretty sorry cover. But with over 1000 reviews on Amazon, a great star rating, and a $0.99 price point I think it’s doing fine for this author. Although, I did see some of the negative reviews specifically complained that there was too much sex. (Despite the author’s clear attempt to manage expectations with: ***Mature Audience Advisory*** Identity theft regency style. Funny. Sexy. Cross Dressing. Not your mother’s Regency Romance.)

If the cover were a little sexier and more modern style, modeled and less traditionally regency sketch (not to mention weirdly awkward) this might manage expectations. (Where are their feet? Why is the perspective & of the background and that of the figures so mismatched? Why is he sucking on his cane?

It is all very concerning. I have to stop looking at it now, or I’ll keep worrying.)

After the death of her miserly cousin Antony North, Millicent Boarder is determined her family should never be poor or vulnerable again. To protect them she conceals her cousin’s death and assumes his identity. Now she must face the Ton and the world as Mr. North and accept the price she must pay for her family’s safety — she will never be loved. Which means, of course, at this point she will meet the perfect man.

Here we see Millicent herself put the plan into words:

“There are many types of men in society. If I set out to be deliberately silly, inconsequential, and foolish, then if I should do something odd, people will say, ‘Oh, that is just that odd Mr. North. Think nothing of it.’”

And so she creates a kind of foolish Wilde character, only with far less fashion sense. In order to disguise her body shape she must affect very ill-fitting suits. Again, I tend to gravitate towards and enjoy the quotes that deals with clothing and apparel. Here’s a fun one:

“We met at the assembly,” replied Mildred. “The widow of Sir Richard Whenthistle with the purple turban and astonishingly black hair for her age.”
“And six flounces at the hem,” added Maude with a shudder.

But my favorite things by far in this book are when Mr. North (AKA Millicent) is at his most witty.

“Ah, I realize we have not been properly introduced,” said Millicent to the dark haired creature who sat shivering on her lap. “But I fear you have hopelessly compromised me. We shall have to be wed.”

“Your horses are all well. Merely shaken a bit with one or two scratches. However, I fear it will be necessary to shoot your carriage to put it out of its misery.”

Mr. North as a fribble is released from many societal requirements because of his absurdity. Like the class clown getting away with misbehavior because he makes the teacher laugh.

“Elizabeth Rose Edwina Genevieve Helene, actually,” said Lady Beth. “Good heavens. You should be six feet tall to bear the burden of so many names.”

Mr. North can be either kind or cutting, depending on the circumstances. And Millicent, who is sympathetic to the plight of young lady wallflowers, often uses the foolishness of her alter ego to be kind.

“You have had a London season?” asked Millicent in her softest voice. The answer was the barest nod. “And it did not go well?” An even smaller shake was her answer.
“Whatever is wrong with London?” demanded Millicent.

“Yes, he is a duke,” said Millicent softly. “But what are we to feed him?” demanded Mrs. Prichart. “Food, I imagine,” said Millicent, “since it is only a rumor that they live on moonbeams and starlight.”

I liked how the ending was treated, and I did think it was inevitable, given this is a romance novel. Nevertheless, I was sad to see Mr. North go, and to know Millicent could never be him again and enjoy the freedom of the opposite sex.

“Tea was drunk and stories told of the odd little fellow who had won the hearts of the ton, then died, tragically, before he became unfashionable.”

Mr. North was more powerful than she could ever be, even as a duchess. I have to imagine that after all her liberty she would chaff against the bounds of being a woman once more in the early 1800s. Would marriage and great sex be enough to compensate, do you think? I don’t know.

“When Mr. North’s coffin was carried from the church with Shoffer, Duke of Trolenfield leading on the right side, Mr. North’s brother-in-law to be, a simple secretary, in the middle, and a farmer come hot foot all the way from Wales to fulfill this honor following, the other side staffed by officers in full regimentals, one wag was moved to comment that all that was required was an Indian chief to make the funeral complete.”

I do hope you are enjoying your holidays. I’ve lots of fun blog posts planned for the next few weeks and this month’s Chirrup contains some Very Good News.

{Gail’s monthly read along for January is The Raven’s Ring by Patricia Wrede. You do not have to have read any other Lyra books.}

Your Infusion of Cute . . .
Scientist Tries to Photograph Octopus, Octopus Photographs Scientist Instead

Your Tisane of Smart . . .
How Did Prison Change Oscar Wilde?

Your Writerly Tinctures . . .
He Never Wasted A Single Failure

Quote of the Day:
“They are not so very much older than me, are they? I would not want them to laugh at my presumption.” Millicent paused before answering. “Far be it from me to estimate any lady’s age, whether young or old. Let me only say you are taller.”
~ Ridiculous by D L Carter