Thanks to Little Brown (my publisher) and Moira Quirk (my narrator). It’s a wonderful honor to win for audio. I was raised on audiobooks (no TV) so I really appreciate the art form. 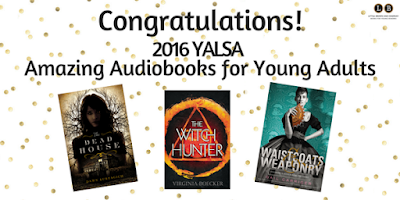 An now, here’s a bit of a review for you…

Books: The Pirate’s Booty
Author: Alex Westmore
Series: Yes. The Plundered Chronicles Book 1 So far this is the first of two (not sure how many are planned total). However, this one stands fine on its own. The second Shiver Her Timbers, released January 11.
Kindle edition $4.99 (not available in print) 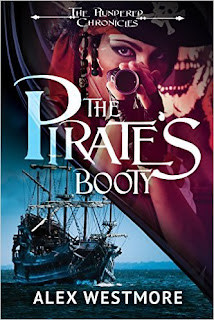 I don’t quite know what to say about The Pirate’s Booty. I finished it late one night over the holidays, and I kept waking up in the middle of the night afterwards ~ not thinking about the book, but thinking about how to write a review of the book. The story really had the emotional tenor of a 1960s pulp mystery, like J.D. McDonald’s Travis McGee series. By that, I mean there is a Gary Sue element to the central character. In Pirate’s Booty the protagonist is a woman, Quinn, but she is not a Mary Sue. She is flirtatious with all of the girls, romances everybody, and is generally utterly charming and dashing in a “hunky hero please sweep me off my feet” kind of way. Quinn rescues women via her sexual prowess (a hallmark of Travis McGee). There adds to the swashbuckling pirate aspect, which reminded me of something like Alexandre Dumas’ The Three Musketeers.

So let’s get into some detail.

Main Character: Quinn
Quinn is an extremely appealing character, she is meant to be. She is also a lesbian in a time period when the concept doesn’t even really exist. Yet every woman who she meets falls in love with her and the few who find out she is a woman stay in love with her. Also, all of her friends who find out are immediately accepting. This didn’t bother me as much as it should. She is a womanizer, although she is nice about it. And I did find myself questioning whether I would be as tolerant of Quinn if she were male. I don’t think I would. And since I don’t want to self-examine my own judgement in this matter, I’ll just leave that there and proceed with this review.

Historical Setting
The historical research, apart from certain social issues previously mentioned, is very good. Although the author does tend to include lots of information about existing historical characters in info-dump form that is a little detrimental to pace. I personally would have preferred a few more small details about the time period, since it isn’t one I’m familiar with. For example: I’d like some more about the clothing, the food, the texture, the materials on the ship, and the smell of the towns. However, this is a mere quibble, these are things that are peculiar to my interests. Westmore is clearly a historian rather than an archaeologist, for her concern is over accuracy in language, town layouts, geography, older place names, and so forth.

On Female Pirates
I have always craved good, well written stories (perhaps a YA historical novel) featuring Anne Bonny, Mary Read, and similar famous female pirates of the past. I have a feeling this is the close that I will ever come. That said, this is not a YA novel. It opens with a sex scene and there are several more throughout the rest of the book. They are not graphic, at least not in an erotica way. I would say they are, again, more appropriate to something like the Three Musketeers or 1960s pulp in their attitude towards and description of the sexual act. By which I mean, they are neither intrinsically suited to the erotica model nor the romance model as perpetuated by modern novels.

Some Final Thoughts
I am bothered by the way so many people so quickly fall in love with Quinn. In that regard, romance is the least effective aspect of this book. I did very much enjoy the historical accuracy, the swashbuckling pirate attitude, and the simple old-fashioned adventure. And while the romance is not effective, the friendships are come and go. In the end, I found myself thinking most about those Victorian sea ballads sung by sailors to women explaining how they will never settle on land because their love of the sea is Eternal. “Don’t fall in love with me, my darling, for I will inevitably break your heart.” Very melodramatic. In that regard this book is romantic, but in the original Victorian sentimental sense of the word and judged under that umbrella, I forgive it its foibles.

Do I think readers of my work will like this book?
I honestly don’t know. It’s very very different. I suspect you have to have an existing appreciation of pirate-style adventure novels. Do you also like attending Ren Faires? As a kid, did you love Treasure Island? Fancy yourself a bit of an eye-patch corset-wearing Lothario? Then yeah, you might like it. If you do, let me know?

In other reading:
I’ve been delving into Highlander romances. Mostly to see how authors handle the Scottish brogue since I have a Scots hero in my novella. I’m finding the sub-genre universally disappointing after having come of age reading Julie Garwood (e.g. The Secret and The Bride). Think I’ll just go reread her instead.

Your Infusion of Cute . . .
A Gargantuan Octopus Rendered in Random Ballpoint Pens by Ray Cincin

Your Tisane of Smart . . .
12 Books with Badass Female Characters

Your Writerly Tinctures . . .
Ten Things I Learned About Publishing in 2015

Book News:
The Well-Read Pirate Queen says of Manners & Mutiny: “I have absolutely adored watching these characters mature over the course of the series and for the most part they got a proper send-off by Carriger. “

Quote of the Day:
The big room downstairs was full of men and women—and a handful of assorted aliens whose sexes Gil didn’t feel qualified to guess—all talking at once in at least three languages and a dozen or more different accents, from pure Galcenian to unadulterated Portside.
~ Debra Doyle & James D. Macdonald, The Price of the Stars