Gentle Reader, I am delighted to announce that, finally, after a great deal of effort (thank you Dan) you can now buy the full cast audio production of Crudrat on Audible for $18. We are also offering an Audio CD through Amazon only (at the moment, we hope to find other distributors) for $25. 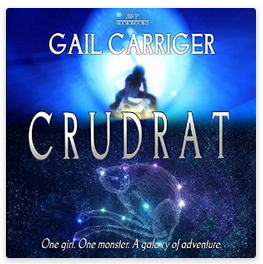 Right now I have no intention of turning Crudrat into a print book. Ask me about it in person some time and I’ll explain my reasoning.

You can also buy on Audible, bundled under the name A Carriger Quartet for $6, the full cast productions of my four short stories that were part of the stretch goals for the kickstarter. The Audio CD is $20 on Amazon only. 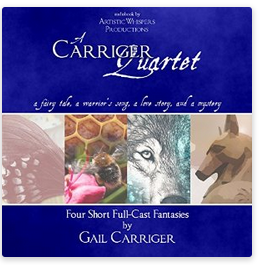 These stories are: My Sister’s Song (the first story I ever had published), The Curious Case (featuring Alessandro Tarabotti), Fairy Debt, and Marine Biology (my only existing contemporary M/M paranormal romance). Learn more about these short stories.

These stories are only available in print books when combined in an anthology. Both Curious Case and Fairy Debt have been recently picked up to appear in now anthologies in the coming year. I’ll let you know more when I do.

The CDs are listed as Temporarily out of Stock. !?
Ignore. It’s a print-on-demand thing. They should ship if you order. If not, it’s Amazon being janky.

Can we get Crudrat and A Quartet on Audible in Australia, UK, or the rest of the world?
It should be available worldwide, we did trigger that setting when uploading to Audible. If you still can’t get it, it is available for sale on Gumroad via the Crudrat website as well.

What about the CDs worldwide?
Probably not.

MP3 CDs?
Still working on that one.

Kickstarter Update
There are a few kickstarter rewards still to come and there should be information on that coming to backers from my producer Dan very soon.

{Gail’s monthly read along for February is Terrier: The Legend of Beka Cooper Book 1 by Tamora Pierce.}

Your Infusion of Cute . . .
Incredible Footage Reveals How the Coconut Octopus Got Its Name

Your Tisane of Smart . . .
Portrait of a Lady, A Brief History of the term “Lady”

Your Writerly Tinctures . . .
99 Ways to Spread the Word About A Book You Love

Book News:
Tsana’s Reads and Reviews says of Crudrat: “I recommend it to fans of adventure-style SF and coming of age stories.”

‘Bring my shaving things.’
A gleam of hope shone in the man’s eye, mixed with doubt.
‘You mean, sir?’
‘And shave off my moustache.’
There was a moment’s silence. I could see the fellow was deeply moved.
‘Thank you very much indeed, sir,’ he said, in a low voice.

Want Gail in you inbox once a month? Get the Chirrup!
Tags: Audiobook, CRUDRAT, Short Story, Tinkered Stars