Gentle Reader, one of the most common questions I get is “What are you reading right now?” I’m a voracious reader and I do want to share what I’m enjoying. So occasionally I’ll post a book review.

As a professional author, I don’t feel right posting reviews to a forum like Amazon, but I feel it’s OK to do it here and on Goodreads (where people know right away that I’m an author). Most of the time I like to share books I enjoyed, sometimes I will have reservations, and sometimes I might be a tad cutting. Hopefully not too cutting. 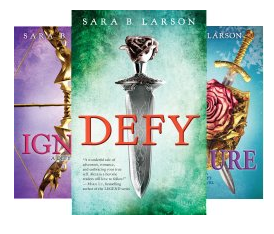 Defy by Sara B Larsen
Book 1 of 3. Yes, you must read them in order.
Will I reading further? I don’t know.
Kindle price at time of writing this post: $1.99
LBGT presence? Nope.

This book contains one of my favorite tropes: a girl who disguises herself as a boy. In this particular novel’s take on the trope the main character, Alexa, is forced to undertake subterfuge, because of her government’s violence towards women. In other respects, this novel is a classic monarchical drama of transference of power. At the beginning of the novel I found it difficult to like Alexa, she seems to have little personality of her own. However, as the story progressed I liked her more.

The main character’s gender is discovered and or known by several male characters, most of whom then fall in love with her. This gives it a certain Mary Sue vibe, compounded by the fact that the heroine is overly special in her skills and abilities and thus vital to the fate of the country. In this regard, I found the story somewhat predictable. The romances, and there is a classic love triangle, were equally predictable. By the end, while I was very much enjoying the story and had grown to identify with Alexa more, I never did get behind the romances. That aspect of the story felt overly angst ridden (although I do think teen readers would enjoy it). I also think that Twilight has a lot to answer for.

This is the start of a series, and it certainly has the feel of needing to read all of the books. As there are only three I might go for it (anymore and I couldn’t take the angst). I refuse to get into another Terah Edun Sworn situation. 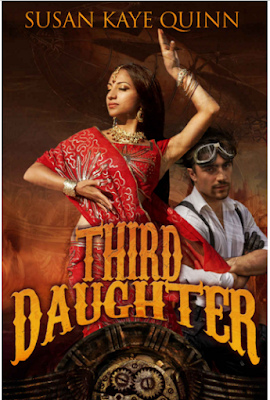 Third Daughter by Susan Kaye Quinn
Book 1 of 3. Each has different main character and can be read alone.
Will I be reading further? No.
Kindle price at time of writing this post: $0.99
LBGT presence? No.
In brief? A good premise of Bollywood meets steampunk with a great title, that drags and suffered for lack of developmental editing.

Classified as a sweet romance by which moniker the romance genre seems to imply clean: no nookie and no nudity. I wouldn’t necessarily call this book a romance novel, however. There is a great deal of technology, spy work, politics, and other drama which make the main plot not about the two characters getting together. Although you could make a case to the contrary. (In this regard the book is hard to classify, not unlike Soulless.)

I enjoyed the world building, atmosphere, and concept. I thought the story was passable and characters were OK, however the writing dragged to the point of frustration. I feel like Third Daughter started well but lagged at about the 1/3 mark and never recovered. Frankly, it needed a good developmental edit pass. There was a great deal of redundant phrasing, repeat plot points, and circling back conversation (where characters say the same thing to each other in different ways a few pages apart) that all should have been deleted. That said, the copy edit was stellar.

“Yet, her mission wasn’t simply to verify its existence, but to discover its exact nature and capabilities.” Aniri (protag) must have said some iteration of “I need to see the airship” at least six times in the space of one chapter.

Niggling annoyance? I felt the author’s choice of the word courtesan (over courtier) quite odd. Every time I read it, it threw me out of the story. Use of that specific word made the actions of one love interest totally unsurprising. Thus I got annoyed when Aniri was surprised by him. However, this may be a research language thing: Quinn might be using courtesan because it has a more varied meaning in Indian culture, or directly relates to an Indian word. I wish she had just used a non-English word.

Oh, and at one point Aniri literally tells the bad guy, without irony, “You won’t get away with this.”

Reservations aside, I did finish the whole book, which is saying something for me. I have been known to ruthlessly stop a book part way through, or just skip to the end and read the last chapter to find out what happened. I didn’t do that with Third Daughter.

{Gail’s monthly read along for February is Terrier: The Legend of Beka Cooper Book 1 by Tamora Pierce.}

Your Tisane of Smart . . .
Octopus Crawls On Land

Quote of the Day:
“When it comes to letting the world in on the secrets of his heart, he has about as much shrinking reticence as a steam calliope.”
~ P.G. Wodehouse