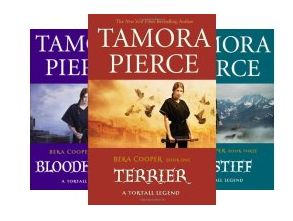 I’m beginning to, finally, recognize patterns in Tamora Pierce’s heroines. When I was a kid I identified with her books so strongly I couldn’t possibly step back as a writer to see her tricks. Now, with the benefit of age and distance, I read this book with new eyes. Her main characters always have some kind of fatal flaw – in Beka’s case it’s fear of public speaking and chronic shyness, for Alanna it was cold and spiders, for Kel it was heights, and so forth. At some point, in each series, the heroine will be made to face her fear.

On the other hand, she also has an equally strong good trait or two – for Alanna this was stubbornness and whit, for Kel a stoically strong leadership, for Beka it’s dogged determination.

“I could’ve swore you said the Bold Brass gang got took down by an eight-year-old.”
My lord nodded and says, “She took against one of them. He was living with her mama. When he found out her mama had lung rot, he beat her up and took all she had of value. The girl Dogged him.”

For all of them it’s also surrounding themselves with supportive friends. You know I LOVE that. There is always one major issue or problem in each book for each girl that only she sees (and proverbially, must be responsible for the solution). In Beka’s first case it’s a problem of people disappearing, and since these people are her people (the poor and destitute) she undertakes their protection.

The Lower City is mine. Its people are mine—its children are mine. If I find them that’s doing all this kidnapping and murdering, they’d best pray for mercy.

I like Pierce best when she’s writing YA with a warrior girl main character. The Wild Mage series are my least favorite Tortall books and I gave up on her non-Tortall Circle series early.

But with Beka we’re back to my favorite kind of read. I will say I am not a huge fan of first person POV, and this epistolary style can be a little awkward.

In this first Beka Cooper book, Pierce successfully weaves almost Noir police procedural with gritty crime-and-punishment in a fantasy setting. It reminded me, ever so slightly, of Vimes and the Night Watch of Ankh Morpork. Pierce is also using Beka to explore, for what feels like the first time, the commoners of Tortall – the neglected layfolk and the street people.

So often fantasy novels are about nobles and quests, it was delightful to see what the underlings thought of the nobles. The use of Lower City slang and lingo pervades the book, but not so much I was uncomfortable with it. So too there are also little touches of superstition which bring this world to life.

And never forgetting the descriptions of food.

thought I might drool when the smells met my nose: spiced pork pie with anise, herbs in beef broth, a raston, and a Tyran custard

Like peopling her books with excess characters, Pierce has such a light touch you hardly notice the overload. (And her editors let her get away with it, they might not with a less seasoned YA author.) Her wide cast of characters includes animals and the return of one of my favorites of all time, the Wanderer, the Cat, AKA (spoiler alert for Alanna) Faithful! I remember crying so hard in the last Alanna book when he returned to the Goddess. So to have him back in all his cheeky glory is truly wonderful. I would have bought this book on that fact alone if I had known.

“Did you know mages have named certain constellations ‘wanderers,’ because they appear and disappear for decades at a time? One of those is the Cat. At present, the Cat is missing from the night sky.”

So what are my final thoughts?

If you have a pre-teen girl in your life you owe it to the world to put Tamora Pierce in front of her. Beka is an excellent way to start, although Alanna will always be my favorite. Pierce is a master of strong tough young women. Women who know what they want, stand up for what they believe, hold a moral compass made of personal integrity, and still can love and be kind and surround themselves with friends. With the gruesome specter of reality TV looming over us, someone has to fight the good fight. We should all be so lucky as to have a little Tamora Pierce in our lives, and in ourselves.

The second book in the series takes Beka away from Chorus and her friends and puts her on a case in a strange city giving her a new love interest. This book didn’t hold me as much as the first (or third) but it’s still worth the slog to know what happens to her there. I suggest it also because of the presence of one of the first instances I know, in YA fantasy, of a transgender woman. There is a beautiful little scene where Okha Soyan explains what this means to a confused but sympathetic Beka.

The final Beka book is probably my favorite. Oddly it begins with Beka mourning the loss of her Dog lover. And goes on to become a true classic quest. There is Beka (shall we call her the ranger?), a mage, a paladin, and a rogue. I didn’t realize this until this most recent reread. Pierce has fun with the tropes and delves once more into the horrors of the common folk in medieval times (basically). It’s nice to see a fantasy that doesn’t glorify nobility to the expense of all reality. For those of you who, like me, yearn for a happy ever after, don’t you worry. Beka gets that too. But then if you’ve read the Alanna books you know that, for we have all met her marvelous long after progeny.

(And yes, before you ask, George Cooper is my ideal man. So there.)

Pierce is generally good about mixing up gender and approaching feminism head on. For example she gives us, at the very beginning of Terrier, a domestic abuser who is the mother, and in this book we meet the cult of the Gentle Goddess which oppresses women, but is also enforced by women. I like it, Pierce is gloriously multifaceted, and never afraid to approach big issues, like slavery.

“Cats must always be cats, even when they are gods, or constellations.”
~ Terrier: The Legend of Beka Cooper #1 by Tamora Pierce

P.S. I’d like to state for the record that I wrote my character, Tunstell, before I read these books.

{Gail’s monthly read along for March is Sorcery & Cecelia: Or, The Enchanted Chocolate Pot by Patricia C. Wrede and Caroline Stevermer.} 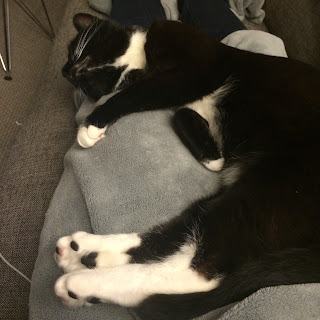 Your Tisane of Smart . . .
“He has purple eyes,” one of the new coves said. He looked a bit spooked. “Purple eyes. Is he magic?”
“Aren’t all cats?” Ersken asked.
~ Terrier: The Legend of Beka Cooper #1 by Tamora Pierce

Your Writerly Tinctures . . .
10 Character Cliches to Watch Out For

Book News:
Cassandra Giovanni gives Manners & Mutiny nothing but 5 stars across the board:
“The final novel in the Finishing School series is a topping one for sure. Not only are we served with a beautiful cover and intriguing description, but the entire novel is as fun as the rest.”

Quote of the Day:
“You look as scary as a buttered muffin,” I grumbled.
~ Bloodhound: The Legend of Beka Cooper #2  by Tamora Pierce