ECCC ~ The Comicon to Beat

I have just returned from Emerald City Comicon (ECCC), Gentle Reader, and what a pleasant time was had by all. The only other comic con I have attended is San Diego (SDCC). While I enjoyed it very much, it was, frankly, overwhelming.

ECCC had everything I liked best about SDCC, but on a much more manageable scale. It has fewer actors and thus less star power (obv. no LA), but since that’s not really my fandom, I didn’t miss it. I have a Nor Cal lady’s suspicion of LA whenever it rears its beautiful plastic head. I liked that ECCC felt more down home and properly fannish. It really was all about the comics. 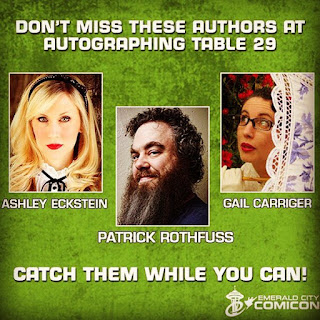 Yes, I did try to dress on the first day to match the convention’s color theme.

Seattle seemed to handle the influx with aplomb. They even rolled out nice weather for us. The con-bar was good (if overwhelmed). I liked my hotel (there was a pool, a bathtub, and a decently priced veggie omelet on room service, all I really care about). I even managed to figure out the convention center lay out, after a few days. I never had to wait too long in any line (several of the bathrooms are gender neutral, which always helps with the line situation).

All in all, I highly recommend it and I intend to return again… if invited of course.

The Details of Gail in Seattle

I actually arrived a day early with the AB in tow, to spend time exploring the city. We started out by tracking down the Crumpet Shop for breakfast (on the recommendation of the awesome Piper J. Drake). 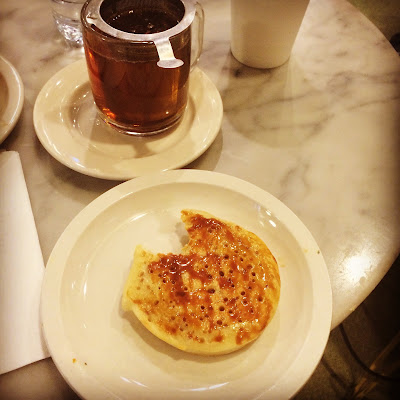 It’s a tiny place but well worth a visit. The crumpets were delicious and they offered butter and proper Marmite. Which, as this is basically my standard breakfast, made me endlessly happy. 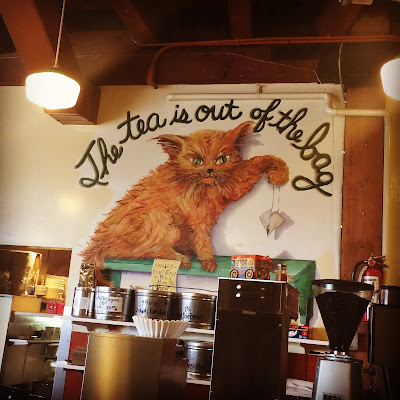 The tea was excellent too. I had the loose leaf Assam (of course) a nice full leaf, rich aroma, malty and subtle. Highly recommended. Whole milk available to add, as it should be (but often isn’t).

We then visited the fish market. Where I admired this fine fellow: 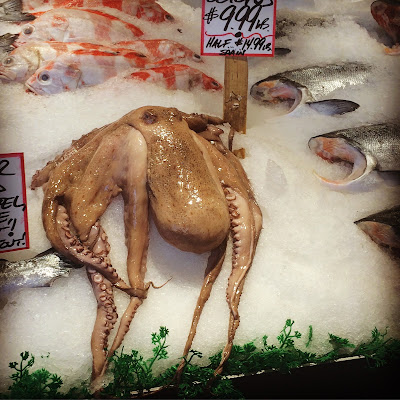 We then trekked all over the city, visited Serious Pie (also thanks to Piper) and other yummy food spots. That evening was Drinklings (a private gathering for writer and other industry pros) and was, as always, a blast.

Friday I had two panels, each followed by a signing. My first panel was standing room only, and I had thought it would be your standard world building 101, but the moderator kept us at a clip, my fellow panelists (Lisa Mantchev &  David Levine) were witty and smart, and the audience questions were engaging. The second panel was the Orbit crew (Seanan McGuire, Sam Sykes, Brent Weeks). I’ve said it before: I feel like Orbit picks authors based on who is the biggest punk-arse at the bar. Sam started us off by stealing my hat and accusing Brent of something unmentionable and it went downhill from there. I had no less than three people come up after to say that they had never before laughed so hard at a panel. I call that a win.

After that, it was off to an evening of bar crawling and debauchery. As you do. Memorable moments include meeting a young man at the Boom party who has a new urban fantasy coming out based on bartenders fighting crime with cocktail magic (the mind, she boggles), several excellent cosplays, too many Moscow mules (I blame Myke Cole), and a great deal of gossip all of which is now quite fuzzy. That’s OK, I shall enjoy being shocked by it all over again at the next con. 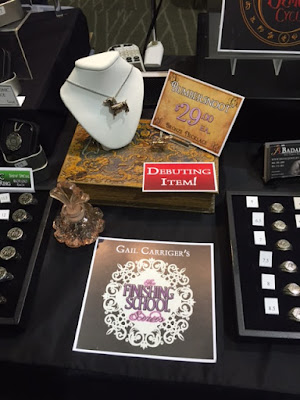 The next day I had a signing at the Badali Jewelry booth. The ladies were most welcoming, the Bumbersnoot necklace was much admired, and I still had time to nip over and up to University Books to sign stock for them. So if you missed me, Seattle, you can get a signed book from them until they run out. 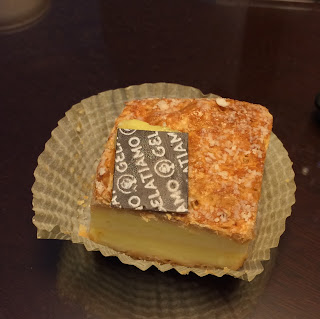 Then I walked the length of the city to Seattle Mystery Bookshop for my off site signing. (I found Gelatiamo on the way where they had Diplomatico, my favorite pastry, and Affogato, the only way to drink coffee). Everyone not a the con met me there, and a few hardy souls followed me over. I had a super fun Q&A with the die hard fans ~ I love you all so much! 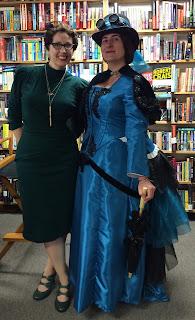 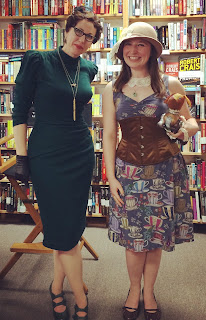 With a visiting Alexia and Sophronia!

I was gifted some wonderful loot including a hat, some buttons, a calligraphic letter, bookmarks, tea, octopus necklace set and so much more. Everyone is always so generous and crafty in Seattle. 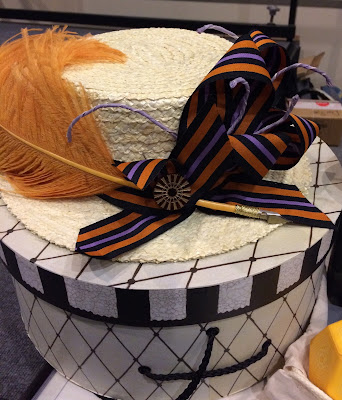 The AB being exhausted from a long hike up a mountain, I crashed the Worldbuilders charity gaming event (well, OK, Pat said I could) and played games to raise money for Heifers International. It’s a fun idea, you pay to attend and then you can play your favorite board or card games with famous authors and comic book artists. There was also a silent action, a raffle, snacks, and a bar.

Yes I, even I, will play a game on occasion if is is antiquities based and for charity. I settled into 7 Wonders. And quite enjoyed myself.

All in all, a wonderful trip. I look forward to returning in the future.

As ever, you don’t have to take my word for it. Aloisius and I ~ The Adventures of Literary Miscreants reports on my bookstore visit, Gail Carriger, Steampunk Maven.

{Gail’s monthly read along for April is To Play the Lady by Naomi Lane.}

Here shown posing with a book and umbrella [no, parasol says Gail], Helen Standish, a woman of the world known for her beauty, was a familiar figure in French and British society. She received in her Paris salon many renowned artists and inspired Marcel Proust.

Your Tisane of Smart . . .
Matrimonial Advertisements in the 19th Century

Your Writerly Tinctures . . .
The Ready to Write Bag 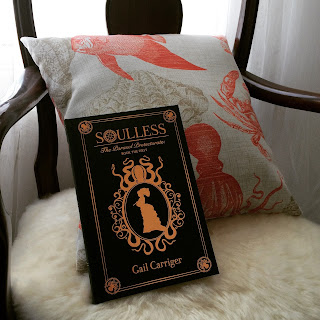 “To lose one parent may be regarded as a misfortune; to lose both looks like carelessness.”

Want Gail in you inbox once a month? Get the Chirrup!
Tags: 20 Minute Delay Podcast, Event