So I was having a bit of a brain fart recently, Gentle Reader, and couldn’t think of anything exciting to blog about that you’d want to know, so I did a spontaneous AMA. Thanks to everyone who (equally spontaneously) participated.

Ever thought about a parasol protectorate adult coloring book?

It’s a bit complicated rights-wise, but Hachette did say they were interested in doing one. I said that’s a wonderful idea! And… cue radio silence. I’ll prod them again in a bit. Or ask my agent to prod.

Why Traditional Publishing Takes So Long

How about writing an anthology about Lord Akeleama adventures from the beginning?

Ueerm.. noooo. Well, not like that anyway. Here’s the thing about Lord Akeldama (because there is always a THING): he is fun as a side character, easy to write, always livens up the place but would be impossible to live (inside my head) with if he were the protagonist. You might be able to cope with it (although I doubt it), can you imagine? Dahling! So much drama! But even if you could take it to read, I certainly couldn’t take it to write. One scene with that man is beyond exhausting! A whole short story might put me in hospital.

I have however, contemplated writing about him from, for example, the perspective of one of his love-lorn dronie-poohs. But, I need that POV to sing to me, and he hasn’t peeped yet. He may peep. You never know who will wake you up in the middle of the night, as an author.

I have a great idea (I think) for a new paranormal YA series set in 1980s suburbia. There’s also space opera, which I love reading and would like to maybe write some day. I’m not sure I have the chops for it though. And, of course, Crudrat is YA space opera.

I could see myself writing something set in the ancient world, or an alternate reality version thereof too. Since I came from that world originally (professionally speaking).

When do you estimate you’ll have time to continue Crudrat? I know it’ll be after you finish the Prudence series, but…

Honestly? A few years at least, as many as five, possibly even more. It’s one of the reasons I never made it available in print, I didn’t want to disappoint people with such a big gap. I hate leaving readers waiting expectantly. For this, I apologize.

Well I talk a lot about the character and archetypes that I love in this post I did about tropes. YA fantasy is a big one for me. I’d love to write traditional fantasy for adults or young adults. I have a this great world I invented years ago that I’d love to revisit some day and see if any wonderful characters live there. (It’s all about the characters, before I can write about somewhere, I need to know someone in my head. Make sense?)

Do you ever feel too tied to your current material or do you still love it enough that you enjoy expanding the world through Prudence et all?

I genuinely love it. I’d stop if I didn’t and write something else.

Will you write about Lord Maccon’s past before he was turned?

I never thought about that. The life of a large Scottish opera singer. Could be fun. Not sure though, he works so well as a foil for Alexia, how to write him on his own?

I loved the side story with M. Tarabotti – will there be other side stories as well?

Yes, I hope so. I’d like to write a whole series of shorts about him at different points in his life.

Would you consider writing a book with another author? If so, who would be on your shortlist?

Yes. I’ve halfway co-authored a piece with my friend Dan Sawyer, but we sort of dropped the ball on it. It would have to be with someone who can handle humor well and who I get along with on a personal level. That list wouldn’t be very long. Maybe some day…

What other supernatural creatures are you thinking about exploring in future short stories, novellas, books, etc?

If it qualifies as a vampire or a shape-shifter with mythological historical connections, it’s probably on my long list of possibilities.

What are some things that are on your bucket list (doable things, crazy things, not metaphysically possible things)?

Honestly? I’m pretty happy with where I am in my life. I’ve learned cool stuff, visited awesome places, found the love of an AB and a cat, and produced a body of work that is out there in the world that I’m pretty darn proud of. I don’t think I can ask for much more.

Most of my practical dreams now revolve around food I want to try, shoes I want to buy, and things I want to write. But I could genuinely die tomorrow and be happy with my life. I don’t think that’s morbid, I think I’m profoundly privileged to be able to say that.

Everything from here on out is gravy. And I do like gravy.

Crazy things? I’d like to fly first class to an exotic small island (probably in or near Asia) where they serve amazing fruit, there’s a private vanishing edge pool and a natural hot spring. I’ve never traveled first class, I’d like to try it just once. And my idea of paradise involves tropical fruit, fresh water of various temperatures (without chlorine), and tons of free time just to read.

No metaphysically possible? I want gills so I can swim for as long as I like underwater unencumbered.

Update on when your self published books are coming out?

I am trying for June, but if I miss that window it won’t be until August. So one of the two. I should know more in about two weeks, so long as everything goes to plan.

How to Write a Novella

{Gail’s monthly read along for May is Powers That Be by Anne McCaffrey and Elizabeth Ann Scarborough.} 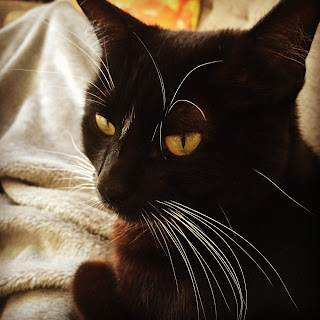 Your Tisane of Smart . . .
Heroines, Smugglers, and Spies: The Forgotten Contributions of Women in the Civil War

Book News:
If there are hearts to be broken, break them: An Interview with Gail Carriger

Want Gail in you inbox once a month? Get the Chirrup!
Tags: Delightfully Deadly, Lord Akeldama, POISON OR PROTECT, Q&A