For so long, the various commercial genres have been kept artificially separate (with the possible exception of SF/F, but even there people argue about the worthiness of soft fantasy compared to hard sci-fi and such rot).

Look, it’s a marketing thing, we all know that. People like categories. And labels. But it occurs to me that much as labeling people or authors causes heartache so labeling books can cause problems. Such as readers who might adore a book not even knowing it exists! 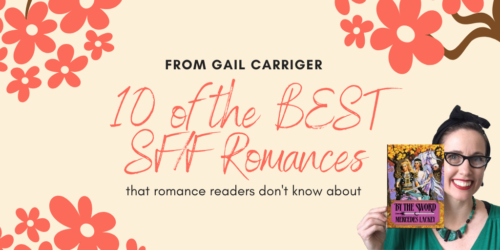 There are a number of wonderful SF/F books with HEAs and glorious romance threads that romance readers don’t know about because they were given cover art and shelf space in the wrong part of the bookstore.

I aim to rectify this!

Some romance readers have already bravely crossed from paranormal romance into urban fantasy. Well, ladies and gentlemen, there is a whole new world after that, and I am giving you a glimpse into the possibilities…

So here is my wholly biased and preferential list of wonderful, satisfying, romances that just happen to be set in a SF or F world. There may be is a bit more world-building and fewer sex scenes than you are accustomed to, but I think they will totally satisfy the romance reader. And frankly, you can always read them and tell me how wrong I was. 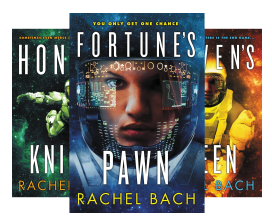 1. The Paradox Series by Rachel Bach ~ Devi, a badass mercenary with a core set of moral values, meets Rupert, the starship cook (or is he an alien, or is he an assassin, or both?) with no moral values what-so-ever. You’ll need to read all three to get your HEA. But you can watch this amazing author build a universe destroying problem in which everyone is trying to do the right thing for the wrong reasons and every bad guy may actually be a good guy in the end. Bach is the story-crafting mistress of us all! 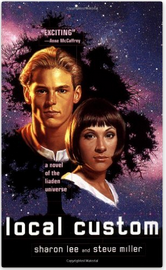 2. Local Custom by Sharon Lee and Steve Miller ~ This deeply romantic, fraught tale of a galactic trader bound by duty and the academic who loves him yet understands him all too well. Epic culture clashing, deep soul bonding, and a matriarch who would keep them apart. Spine tingling stuff. Read my full review on Goodreads. 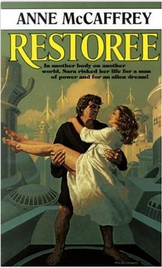 3. Restoree by Anne McCaffrey ~ Perhaps this book is a gimme. The original cover certainly makes it look romance, if old fashioned romance, but I always found it filed in SF/F. Our heroine wakes up on an alien world with an alien face as the nurse to a man with no name. When she begins to remember she takes steps to free them both, sparking worldwide political intrigue and falling in love with the man she was supposed to destroy. Read my review on Goodreads. 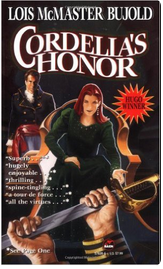 4. Cordelia’s Honor by Lois McMaster Bujold ~ You don’t have to jump into the never ending Vorkosigan saga, you can just read this book (an omnibus of the two Cordelia books: Shards of Honor and Barrayar). Watch bold as brass and intensely honorable Cordelia fall in love with a most inappropriate alien with universe-wide consequences. Yes you even get an HEA, although it is very hard won. Full review on Goodreads. 5. Warprize  by Elizabeth Vaughan ~ This is book one of a trilogy, but I prefer to read it as a stand alone with an HEA. Our heroine is a healer from a medieval style culture taken captive by invading barbarians. But who really is the captive, and who really is the barbarian? 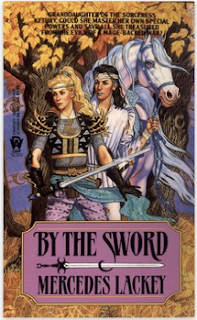 6. By The Sword by Mercedes Lackey ~ Mercenary and ultimate tough chick, Kero, accidentally rescues a herald and accidentally falls in love in the process. Yes the romance takes a back seat, but it’s still an emotional roller-coaster as the two jockey for power across countries in the midst of war. Read it for the amazing battle sequences and killer side characters, but yes, that oh so impactful HEA. 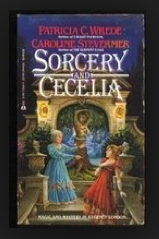 7. Sorcery and Cecelia by Patricia C. Wrede, Caroline Stevermer ~ Two romances for the price of one! Regency London with magic and fun, always keeping a light touch, this epistolary book is the story of two girls unraveling a magic mystery, and falling in love along the way. Read my full review on Goodreads. 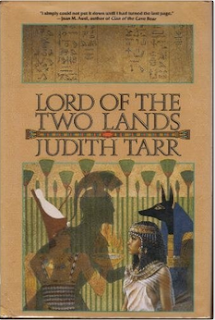 8. Lord of the Two Lands by Judith Tarr ~ Like your romance steeped in history? This is the story of an ambassador priestess of ancient Egypt and her complex relationship with Alexander the Great. It is also the story of the contentious love she shares with the man assigned to be her guard. Tarr has a unique writing style that I love. Oh and there is a sacred cat. Full review on Goodreads. 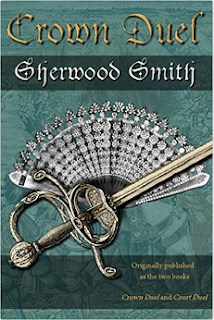 9. Crown Duel by Sherwood Smith ~ Do you like your fantasy set in a high court, full of politics and princesses and game playing? Is Pride and Prejudice your favorite Austen? Then this omnibus is for you. Mel is raised in the countryside to be a warrior countess, set out to defeat the evil king, and ends up getting a great deal more than she bargained for in the form of one reserved nobleman. Review on Goodreads. 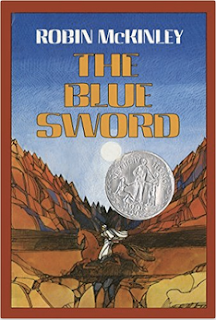 10. The Blue Sword by Robin McKinley ~ A YA fantasy (that really isn’t YA) in which a girl is kidnapped by a desert king to train to be his kingdom’s last female warrior and only hope. Strong personalities and serious conflict drive their relationship (don’t worry – no Stockholm syndrome) and ancient evils will be defeated. Magic swords, hunting cats, and delightful horses abound. 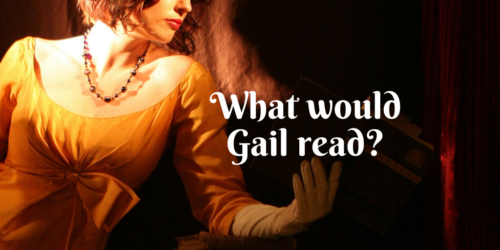 Hard to find but worth hunting down…

Blade Dancer by S.L.Viehl ~ If you like your lovers star-crossed (literally) and soul bound, with both parties trying to defy the connection then this is for you. Tough warrior Jory pulls together seven rejected half-alien children in order to fight for justice, but she doesn’t know what to do when one of them is the love of her life. Read my review on Goodreads.

Fire Sword by Adrienne Martine-Barnes ~ Darn near impossible to get hold of, this wonderful book is the start of a larger series, but each one is designed to stand alone. The books tackle fate, mythology, time travel, and the meddling of iron age Celtic gods. One of whom becomes one of the most sympathetic alpha heroes I’ve ever read. This HEA involves resurrections, prophecies, and world snakes. Read my full review on Goodreads.

Taming the Forest King by Claudia J. Edwards ~ Military leader and soldier Tevra is sent in to pacify a branch of the empire mire in secrets and magic. There she is forced to choose between two men without realizing it. One of my favorite tropes, the man who has pined for years but never dared speak up. This is both a killer love triangle, utterly believable, and the HEA to end all HEAs. Read my review on Goodreads.

The Forgotten Beasts of Eld by Patricia A. McKillip ~ If you like your fantasy very high indeed, steeped in riddles and legends and ancient exotic animals than this book is for you. The story of the most powerful sorceress on earth and the seventh son of a seventh son, so steeped in his family’s petty wars that he drags her into them. Or is she using him to her own ends? You’ll get your HEA, it’s bittersweet but there. Everything about this book is magic, including the prose itself. This is my desert island book. Read my full review on Goodreads. 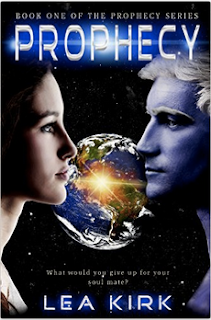 Shout out to Lea Kirk, author of the lovely Prophecy. who inspired this blog post. This is very much a romance with sci-fi elements. As I started to prattle on about all the sci-fi romances I loved with her and Tess Ryder, my recommendations were met with blank stairs. Hence, this blog. 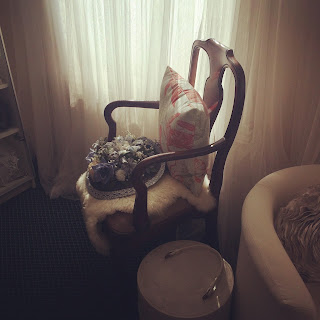 Your Tisane of Smart . . .
Read Some Victorian Gossip: 1871 Newspapers to Read Online 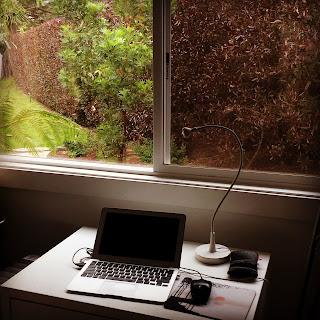 “It’s all I’ve ever wanted, really. Someone to make tea for. To know how they like to drink it, and share some pieces of time with them at the end of long days, and short ones, good days and bad, and everything in between.”

~ Waiting for the Flood by Alexis Hall

Want Gail in you inbox once a month? Get the Chirrup!
Tags: Gail Carriger Recommends