This month’s book pick, Powers That Be, was a reread for me. But a reread of something I hadn’t picked up in decades. It was an interesting experience.

Powers That Be centers on Major Yanaba Maddock, a
disabled veteran, sent to the icy planet Petaybee to die, but also on
one last mission: to spy on the locals and find out what is really going on there. This book has a naive sweetness to it. It reminds me of early McCaffrey books, like the Dragonsinger series. (Also my favorite of her work, and feels very YA to me.) Or even like a Mercedes Lackey
book. The storyline features a native culture full of good people
having nice parties and being very accepting of alternative lifestyles
versus a counter culture that’s more stiff and traditional. This is a
trope McCaffrey is fond of exploring, like the Weyrs verses the Holds on her best known Pern. I
find it interesting to read about, but in my older years I could wish
it were less black and white. 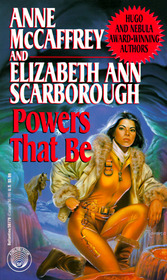 The authors use a lot of
Intuit culture and mix it with Irish traditions and some simplistic
terraforming in a far future science fiction setting, like the Pern books
or the Ship Who Searched series. This ends up feeling far more fantasy
than sci-fi. One can come up for a scientific explanation as to why the
horses would evolve one horn, but one has still stuck a unicorn on ones
ice planet.

I know, I know, it sounds like I’m belittling the book. I’m
not, but it is a creature of its time. It’s like an 80s rock anthem:
cheesy, and nostalgic, and taken SO seriously by the musicians who
played it. Now it makes me wince a little, but I still put it on and
dance around my living room. And I feel guilty and ashamed any
time it comes on streaming, or is mocked in some youtube video, because I
know all the words.

Powers That Be is kind of like that, only in book form. I know as I read that everything is going to be
alright for the characters, the romantic thread is going to pull
through, no one is going to hurt too bad. The SF concepts are going to
be pretty basic and predictable, essentially I kind of know all the words.

But there is
comfort in that. There’s a joy in reading a book like this. It’s the
book equivalent of a decent cup of tea. Not a really good tea with nibbly bits and company, but still tea. And you know how I feel about tea.

Meanwhile, over on Barnes and Noble I am in some very fine company… 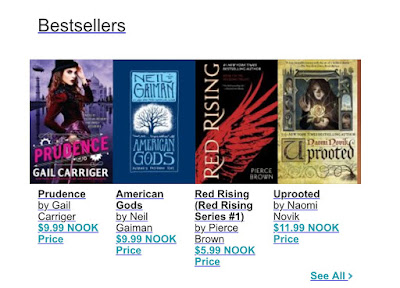 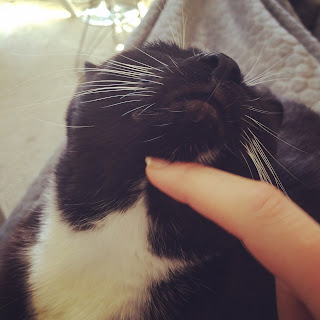 How the Mid-List Died

Quote of the Day:
“It was one of the dullest speeches I ever heard. The Agee woman told us for three quarters of an hour how she came to write her beastly book, when a simple apology was all that was required.”
~ P.G. Wodehouse

Want Gail in you inbox once a month? Get the Chirrup!
Tags: Coop de Book