One of the best things about being an author, Gentle Reader, is all the odd things I end up having to look up.

Here’s a non-spoiler window into some of the things I had to research, investigate, or cogitate while working on Imprudence, as well as a few writer-beast revelations. 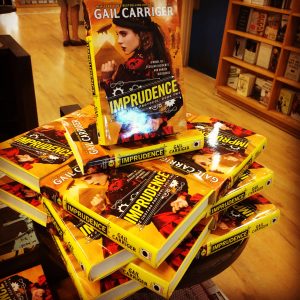 “Women collected and classified ferns, the cultivated and bred ferns, the made outdoor ferneries, the dried, pressed, mounted and framed ferns. They made splatter pictures of them.”

Quarrel is a wonderful word, and seemingly quite British sounding.

Queen Victoria had some pretty kicking mourning gowns after Albert died. But she doesn’t seem to be particularly fond of the normally ubiquitous crape. Perhaps she wore it early on and then went towards light mourning, keeping with black silks and velvets but trimming in lace and fringe and such? Anyway, this lead me down a mourning dress rabbit hole.

One little “a” makes all the difference in managed versus manged.

Introducing: Rue’s best day dress. Since the second book is set in October 1895 the dress is ahead of its time, but you know me, I am weak in the face of polka dots.

Incidentally, I keep track of Rue & Prim’s various dresses by storing the images by chapter for each book. (When I am using actual historic pictures.) Otherwise outfits are concocted based on descriptions out of the big blue book of Victorian dress AKA English Women’s Clothing in the Nineteenth Century: A Comprehensive Guide. I use this book so much that, having noticed it is also available as an ebook, I bought it again, so as to have it with me when on the move. I’m a sucker.

The discovery of oxygen. I think there is a word for when multiple scientists discover the same important thing at (basically) the same time in disconnected locals (Kuhn would mutter something about dominant paradigms and the structure of scientific revolutions but that’s neither here nor there, unless you’re an entomologist, in which case it’s both) but I can’t remember what that word is.

“transparance of air, the comparative brightness of all colour, the visibility of distant objects, the cleanliness of faces and buildings, instead of our opaque atmosphere, deadened colours, obscured distance, smutted faces and black architecture.”

Some interesting descriptive words used to describe a Worth skirt (for Prim):

What would Rue’s theme food be?

Your Infusion of Cute . . .
Trigger the Cat

Book News:
Sam Wachter of Cherry Blossoms and Maple Syrup says: “Prudence was totally worth waiting for, given all the hiccups before its release. It’s as sassy as the Parasol Protectorate series, but still has it’s own distinctive voice and sense of humour.”

“She looked as if she had been poured into her clothes and had forgotten to say “when”. ”