Hello, Gentle Reader, below I answer some frequently asked questions about Imprudence.

Will we get the Audiobook at the same time as the print and ebook?

Did you get it at the same time for Prudence? If yes, then mostly likely yes for Imprudence. If no (waves at the UK) then you are stuck waiting just like last time. I’m given to understand that this is an Audible UK issue.

Will the book/ebook/audiobook release at the same time in the UK, Aus, or other English Language Territory?

It depends. Anything is possible. It’s base your expectations on Prudence, if I were you. I talk about this complicated issue in this Occasional FAQ: Why Do Books Release Later to the UK, Australia & New Zealand? 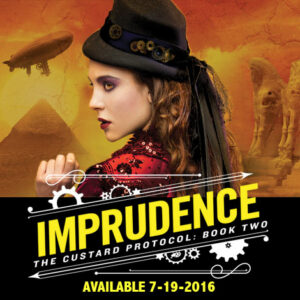 Is this the last book in the series?

Freaked out by the yellow cover, were you? Rest assured I intend to write more Custard Protocol. Right now I have two more books planned and there is a possibility of one or two after that. However, you will not be getting one next year, 2017. I took a break this year to deal with family, medical, and business stuff which means there is nothing in production for next year. Thus CP3 will have a 2018 release.

Is the Custard Protocol series adult or YA?

Adult. New Adult if you must.

Look, I know some bookstores keep putting Custard Protocol books in YA (if you are at your favorite indie looking for it, try that section) but while Prudence may have passed I doubt Imprudence will. All I have to say to bookstores and libraries is: if you don’t mind your teens getting a SERIOUS education then by all means, shelve it in YA. But you might want to put it into the right section with this book. The gloves, literally and figuratively, are most certainly off!

Can I get a signed copy?

Yes. Here are your options:

Will we see Custard Protocol characters in your novellas?

The inevitable: What about Lyall & Biffy?

OK. So the second Supernatural Society Novella will deal with both them and the doings in London after Imprudence. It’s one of the reasons I’ve been holding off on that novella, Imprudence has to release first and you all need to be caught up. It’s not yet written so I make no promises on a release date, and that’s why it’s not up on the website. But I intend to try to write it when I get back from tour.

What are you working on right now?

An utterly ridiculous, totally raunchy, passion project that is so off brand I’m not sure it will ever see the light of day. If it does, it’ll come with hella warnings, a super sexy cover, and likely a G. Carriger by line. (Yeah, I busted out hella.) If I finish it, I’m most likely to poll the newsletter regarding its fate. So pay attention to the Chirrup if you’re intrigued. But for now, I’m keeping a tight lid on this one. It’s… risky, and filthy, and adorable. But oh my god so much fun!

Soon as I’m back from tour, I switch to the Biffy Lyall reunion. Gotta do some reading first. Of my own books. I know, right? Bah!

And here’s some other stuff I can’t really talk about much here in this blog, but which people may want to read about:

{Gail’s monthly read along for July is Poison or Protect by Gail Carriger.} 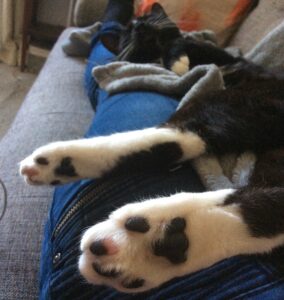 The Evolution of the Dandies

Double your Emergency Fund if You Plan to Be Self-Employed