So, Gentle Reader, I chose this book blind (without having vetted it) and this is the second time I have done that and regretted it.

That said, I enjoyed the book. It kept me glued to the couch while convalescing from my own stupidity, which is all I ask for from books as a rule. However, I think the other Linnea Sinclair that I read, Games of Command, was more to my taste. (Prevailing opinion amongst those in my readership who also regularly read Sinclair, is that An Accidental Goddess is her best. For some reason the blurb for that book has never sucked me in.) 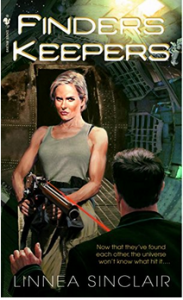 First of all, I chose Finders Keepers because it was the only other of Sinclair’s blurbs that appealed. I was interested in this author for the Book Group (A) because I enjoyed Games, and (B) because she is basically the acknowledged queen of SF romance.

So far as I understand, there isn’t a great deal of super popular SF romance. It’s a burgeoning field but a sticky one to navigate. There’s already not a huge number of crossover genre readers between Mystery, SF/F, and Romance, and (as a rule) SF readers get tetchy about how their SF element is handled.

I’m not big on hard sci-fi myself (I prefer character over concept) but I do love my space opera, and I think that Sinclair does a solid job with her SF elements: the aliens, the spaceships, the ship-board culture, the societies, the technology, and languages, etc… In fact, I think with this book that the science fiction parts were the best parts, the plot was tightly paced, and technobabble was handled well. For me it was the romance that felt a little lackluster. (Funnily enough, Games of Command was the opposite. I found the romance compelling but the plot waffled a great deal in the middle. Just a data point.) 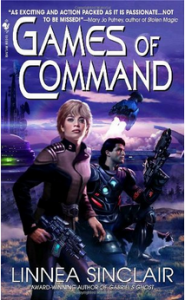 An interesting thing about SF romance, and I noticed this with Bach’s book and a few others, is that it isn’t always the heroine who is the Special Snowflake but the hero. In other words, Sinclair seems to write tough yet pretty ladies who happen to fall in with very special alpha warriors who are built by their governments to be deadly … yet tumble deeply into love with the rough-and-tumble chick. Usually, particularly in YA, the main female character is the Special Snowflake, but I’m wondering if in SF romance it’s an accepted trope to have it be the hero? Or maybe its a pull from military romance?

Not that I mind a Special Snowflake trope, it’s just that occasionally it edges (particularly in YA) too far into Mary Sue and then I get turned off.

“Tastes like rice that was ashamed of its identity.”

So it was the romance that disappointed me. Most of the initial approach was driven by proximity alert. A SF parlance term I believe was popularized in Star Trek but which the cast of Farscape used to describe the fact that any action aboard ship inevitably resulted in the heroine and hero being physically thrown together. (If you watch Farscape, you’ll see they use this with Aeryn and John a lot). Trilby stumbles and falls into or on top of Mr. Genetic-Engineered-and-Mustached at least four times in the first third of the book. This is also associated with the trope of the clumsy heroine, one which I dislike, not intensely, but which can cause me to raise an eyebrow.

“Instinctively he clasped her tightly against him and rolled away, placing his body protectively over hers.”

However, my reservations over the meat of the romance have almost entirely to do with the middle of the book after Trilby has rejected Rhis. He goes through the middle third stalking her in a pretty sleazy fashion. There were a couple of scenes that really made me uncomfortable. This may be a personal trigger so I won’t ding the book for it too hard, but I wonder if others got squeamish? (I have to admit to not loving a mustache either, except for comedic value.*)

My only final thought is that I wish Sinclair would write in the same universe. Each one of her books seems to be set in an entirely different star system with totally new characters. I’d be more tempted to continue reading her stuff if there were more crossover. I don’t demand a series, in fact I’d rather not, but I like the romance genre’s inclination to write shared-world books. (That’s why I’m doing it with my novellas.) I’d like the option of seeing how politics shake out in one of her universes, but instead it felt like the SF element in both these books was rather sacrificed on the alter of HEA.

This might say more about me as an SF/F reader who came late to romance than it does about her as a writer. And part of what writing this review has taught me is what a very difficult genre SF Romance must be to write in. What a challenge! Maybe someday I’ll pick up that gauntlet… or not. 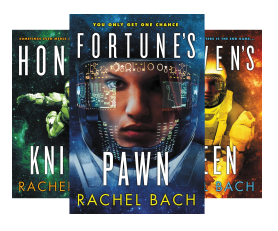 If you like the trope of a super strong bad-ass female-driven sci-fi with a special snowflake alpha warrior hero then I’d suggest the Paradox series is your best bet. It’s not strictly romance but the romance is good, the plot and pace are killer, and its a tidy three books you can sink into without getting lost forever Liaden style. * A note on the mustache quibble. Things that are a matter of erotic preference I try not to use to judge a romance book. I mean, we all know what we like and what we would rather not read about. I remember one reviewer of Soulless (early on before I stopped reading such things) didn’t like the fact that there is sexy biting in my books. I kinda feel that werewolves are gonna go there, but she/he was totally entitled to be turned off by nibbles. This falls under my shrug-it-off category. As a romance reader I tend to fall into the GGG camp, as in: I may not like it personally but I am willing to give it a read/write to see why someone else might, and if it upsets me I’ll just skip it next time. Mustaches, however, when all is said and done, not my thing.

{Gail’s monthly read along for October is The Black Swan by Mercedes Lackey. This is a reread for me, and old favorite but it has  been years.} 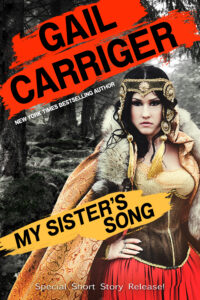 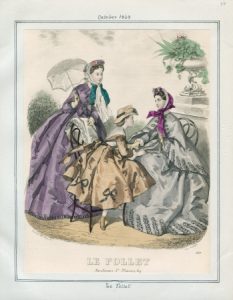 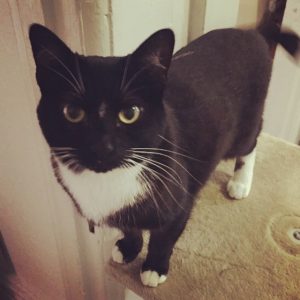 Beyond the Temporal ~ Spirits and Faith in Victorian England

The ellipsis in medieval manuscripts 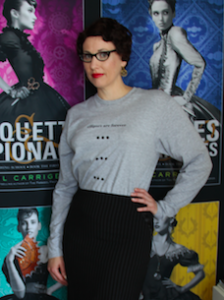 Self I my Ellipses Are Forever shirt.

“He had the sort of flowing accent you rarely heard these days, an old BBC accent, the type where you knew the speaker had been brought up to hate rudeness above all other sins.”
~ Snow on the Roof by J. Leigh Bailey, Mari Donne, Amy Rae Durreson, Tray Ellis, Kim Fielding, Laylah Hunter, John Inman, Linda James, Rhidian Brenig Jones, Anne Regan