Gentle Reader, please welcome Lea Kirk to tea on the blog today. Lea writes one of my favorite sub-genres: science Fiction romance. She is also a darling friend. 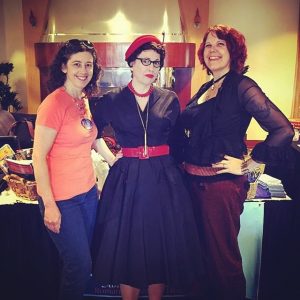 About You, Author Lea Kirk!

Tea, with honey. Normally peppermint tea, but I have found that Throat Coat is mildly addictive. Is it just me?

Totally depends on the type of event, and my mood. Most of the time I go for business casual. I have considered dressing up as an alien a couple of times, though. Maybe I will at some point.

If I had my way, my writer beast would work all day in my PJs and my big, fluffy robe. Occasionally I have, but most days I’m a boring t-shirt and jeans writer. I am a method-writer though, meaning I sometimes act out how my characters move to make sure I’m describing it right on the page. If you happen to walk in on me during those moments, you might be surprised.

As for environment, I share an office with my husband, so normally the CPA in him forces him to keep it organized. I’m much more the laid back, artsy type, and messes don’t bother me until I trip over them. This has driven my DH to the brink of insanity more than a few times over the years.

Oh, dear. Well, most days I drive my beat-up, dark-green, mid-90s vintage Grand Caravan with a black Spock Box on top (also referred to by normal people as a Thule gear box). On special occasions—when I don’t have to haul around my five kids—I will drive my 2004 T-bird convertible. (This was a gift from my hubby for staying married to him for 25 years. Can’t wait to see what he’ll give me for our 50th anniversary!)

*Gulp* Chocolate on a plain cone. (Did I pass?)

[Yes! You are sane with very slight oddball tendencies.]

Also, some of the antics my kids (and hubby) get into.

Margarita, always with salt. Ice consistency depends on my mood. 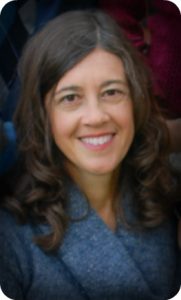 Lea Kirk loves to transport her readers to other worlds with her romances of science fiction and time travel. Her fascination with science fiction began at six years old when her dad introduced her to the original Star Trek TV series. She fell in love with the show, and was even known to run through her parents’ house wearing the tunic top of her red knit pantsuit and her white go-go boots pretending to be Lieutenant Uhura.

Ms. Kirk lives in California with her wonderful hubby of twenty-six years, their five kids (aka, the nerd herd), and a Doberman who thinks he’s a people. She’s also proud of her seven times great grandson. Apparently her stories will serve as the inspiration for James T. to join Star Fleet Academy. She learned this in the 1980’s when James sought out her counsel on where to find a pair of humpback whales.

About your book! Prophecy

Eat? There’s no time for food—only reading! When you finish, though, you should definitely celebrate with a nice steak dinner, then pick up book two of my series and start all over.

Ohhh, evil is tall and green. Evil is exotic and blue. Evil is old and feeble. “Trust no one, Dr. Jones.”

Oh, geez. I’m not allowed to skip this one, huh? Okay, it’s a tough choice, but I’d have to pick Dante Dacian, one of the hero’s best friends. He’s 6’3”, geeky, and a healer. He also happens to have blue skin and hails from another planet. Disclaimer: My choice may be slightly guilt driven as I’ve given Dante a heartbreaking past.

There are a couple of eras that appeal to me. One is the 1930s through mid-40s for sure (music, dancing, WWII, Western culture). The other is Old West (1800s). It just seems like an exciting time, especially with the expansion of the railroads. And horses. I love horses.

Overall, I’d have to say that these eras do not particularly influence my world building. The Old West might but only because I compare post-invasion life on Earth to living in the Old West. Even though alien technology provides methods of fast transportation, many of my characters prefer to ride horseback for their local jaunts.

Probably Kelly Rossler, a secondary character in Prophecy. Kelly loses her eight-year-old son during the Anferthian invasion of Earth. She can’t quite manage to accept that not all Anferthians—or aliens in general—are evil. The toll on her mind starts to show in book two (Salvation), and she does the unthinkable in her search for “justice”. I’m not certain what will happen to her next, or if she’ll even make another appearance in future novels for the series. We’ll just have to wait and see.

I totally love the interactions between Alex (the heroine) and her younger brother, Nick. They love each other unconditionally, but there is an underlying sibling rivalry that helps keep them going even though the world has fallen apart. One of the funniest moments IMO is when Nick happens upon his sister and her alien love interest, Gryf, getting on in the middle of the forest. 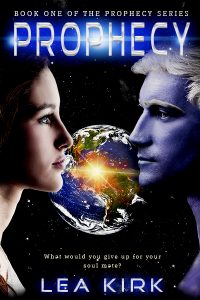 A nightmare of galactic proportions…

One normal day turns into horror when Earth is attacked. Now ER nurse Alexandra Bock is imprisoned aboard an alien slave ship with no way out. She deems all aliens untrustworthy, including the handsome blue-skinned Matiran captain who shares her cell.

A betrayal from within…

One night of treachery leaves Senior Captain Gryf Helyg a prisoner of his enemies. Because of him, Earth’s inhabitants face extinction and his home world is threatened. But his plans for escape are complicated by his inexplicable draw to the Earth woman imprisoned with him.

A chance to save both their peoples…

One ancient prophecy holds the key to free Alexandra and Gryf’s war-ravaged worlds. Can two wounded souls who have lost everything learn to trust and forgive in order to fulfill the prophecy, and find a love that will last for eternity? “Any reviewer who expresses rage and loathing for a novel is preposterous. He or she is like a person who has put on full armor and attacked a hot fudge sundae.”
~ Kurt Vonnegut

When Librarians are Silenced

Do Authors Owe Us Their Whole Selves?

1Book1Review on YouTube says of Imprudence: “I loved the book. It was fun to read. It was fast paced, action-packed, and a lot of flirting and tea (as you can expect from Gail Carriger).”

“There is nothing to writing. All you do is sit down at a typewriter and open a vein.”
~ Red Smith