Cover Art & Its Purpose in Life (Important for Writers)

I’m always thinking and talking a lot about cover art. I love it and it fascinates me. I’m pretty sure I have a career because of the cover of Soulless. 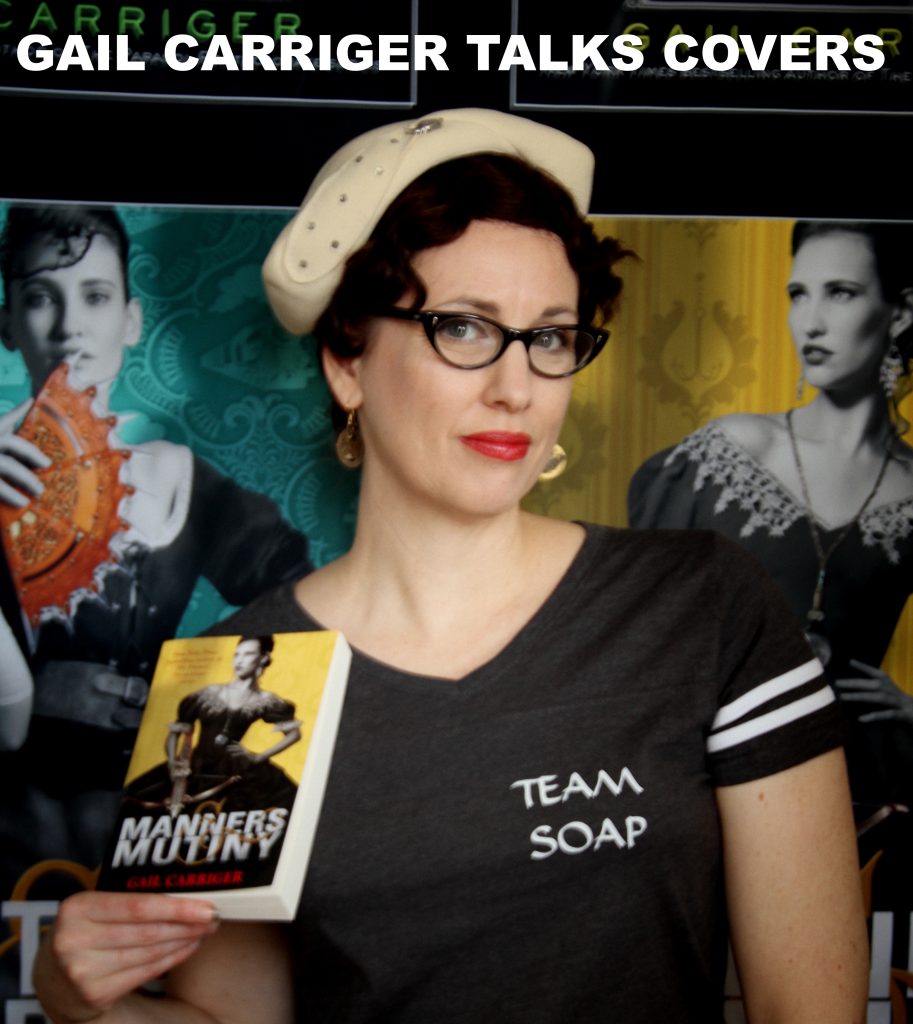 It has come up on a podcast interview on SF & F Marketing. And I have a lot to say on the subject when connected to using a pen name because yes YOUR NAME IS PART OF YOUR COVER (why did I choose a new pen name?). 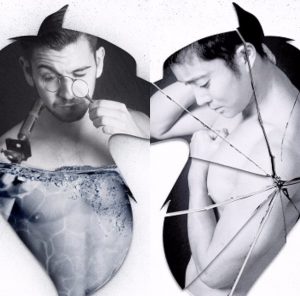 My new saying? The pretty is the enemy of the correct.

Covers are like a visual elevator pitch for a book, they don’t need to say exactly what’s in it so much as what’s it’s about.

The point of the cover is not to find AN audience for that book but to find the RIGHT audience.

I think a lot of indie authors forget this, and get embroiled in trying to make it look too much like what’s inside and not enough like packaging that represents the book’s theme.

That last statement may have made some of you angry, because it smacks of manipulation.

But stick with me, okay? 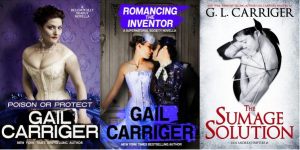 Goodreads put up a ton of books on sale  and I went to check them out.

Here are 10 covers that stood out for me:

Without knowing anything else but having only those small images.

And without reading anything about the books.

I’m gonna tell you what I thought when I saw its thumbnail.

Let’s see if you agree with me?

Whisper
What I like: Clear indication of romance given the swirly font and large female author name. Horses indicate old west or plantation setting. Red and cream is a tasteful coloring.
Issues: Can’t read whole title. Cover is generic.
What do I think this book is about? Heterosexual romance in a historical setting. Demure pose and the fact that she is alone in the picture with a horse in the background suggests sweet romance (little sex).
Was I right given the blurb? Yes

Smoke & Bone
What I like: The color pallet, the starkness of the lighting, the slash nature of the mask and the title.
Issues: Didn’t realize the title was Daughter of Smoke & Bone until I really squinted, can’t read author name at all. Not sure how I feel about three different fonts on the same cover.
What do I think the book is about? I’m going with suspense of some kind, in the Gone Girl oeuvre maybe? Because of the mask, perhaps it’s either historical or set in a theater, makes me think Phantom of the Opera.
Was I right given the blurb? Sort of. Suspense but also urban fantasy?

The Curse Keepers
What I like: KILLER title! The shadow box to make the title pop while still over the figures is a neat trick. I like centered text.
Issues: Author name is not legible, bit generic, weird tattoo stuff on left necessary?
What do I think this book is about? Without a doubt this is in the Cassandra Clare, Beautiful Creatures, etc. YA angst show knock off. This one will be witches and warlocks and stuff like that, no vampires (because of the sunlight and lack of blood red color).
Was I right given the blurb? Yes.

A Taste of Magic
What I like: Very easy to read title and author name, bold color choices.
Issues: Not a lot, actually, while this might not be my kind of book, I think it reads as a near perfect cover for the kind of book it is. Let’s see if I’m right.
What do I think this book is about? Romance, chick lit version of Practical Magic. Contemporary set urban fantasy but with a very light touch and gentle upbeat text, probably involves food. Beach read.
Was I right given the blurb? Yes.

Skewed
What I like: Fantastically striking cover, retro feel, very basic but impactful, color choices. Title and author are clear and easy to read.
Issues: Absolutely no idea what it is about. Could be anything from a quirky adult version of Awkward (that MTV show) or a non-fiction tell all about the music/photo/modeling industry.
What do I think this book is about? Really, no clue. If I HAD to guess I’m going with quirky mock-tell-all of a photojournalist’s crazy hi-jinx. Possibly set in the 1960s.
Was I right given the blurb? Turns out it is about photography, but also celebrity, and crime in a modern setting.

The Last Girl
What I like: As with the romance one above, I think I know exactly what I am in for with this book. Title and author name are clearly visible.
Issues: I really strain to see the figure, I wish it were just big enough for me to make out something about her clothes as that would give me a bit more to go on for setting.
What do I think this book is about? Gone Girl type thing again, maybe post apocalyptic, but could also be country western setting.
Was I right given the blurb? Not really. Turns out to be an epidemic crisis book. Looks like that movie Children of Men.

Under Different Stars
What I like: Striking image for the main photo, stark and atmospheric feel. This gives a slightly uncomfortable and weird feeling.
Issues: The title and author name are kinda hard to make out.
What do I think this book is about? Lit fic, just because of the contrast between the watery image but “Stars” in the title. I’m very wary because it could be a “Cancer Mom” type story. Read: depressing as hell.
Was I right given the blurb? Not at all. Turns out to be a sci fi YA romance. So I would call this one of the cases where the cover is striking, but doing the book no favors.

Dragon Bound
What I like: Again this is one of those that tells me exactly what I’m in for. I like a cover that uses blues and pinks for contrast, and I tend to gravitate towards centered lettering.
Issues: No idea what she is holding, hard to make out author name. Quite generic.
What do I think this book is about? Straight up no frills female main character urban fantasy. Probably heterosexual and featuring dragons as the hook. Modern setting.
Was I right given the blurb? Not really. It’s fantasy not UF, and historical-ish. (I did wonder since she’s in a dress and not leather pants, but the white t-shirt underneath threw me off).

Heirs of Empire
What I like: Strong female central figure, power pose, can read both title and author name. Interesting choice on both serif and sans serif fonts.
Issues: Generic title, cover comes off as old fashioned. Makes me think author and text may be old guard and out of touch. Male author with female protagonist is a red flag for me, personally.
What do I think this book is about? At first I thought epic fantasy because of her armor and the title and serif font, but then I noticed the spaceship in the background and the author name is sans serif, so I’m going with space opera.
Was I right given the blurb? You know what, I still don’t know if this is fantasy or space opera. I think maybe something like Dune? But the blurb doesn’t make anything clearer.

Imitation
What I like: This cover is everything. I really adore it. I think it is stunning and beautiful and stark and so much more.
Issues: None. I like it a lot.
What do I think this book is about? Future, possibly far future, something to do with genetic manipulation or cloning. It reminds me of Orphan Black. This is the only one on this list I’m tempted to investigate further, read the blurb and possibly pick up.
Was I right given the blurb? Yes. Only thing I missed was that this is YA. Which actually turns me off (I love YA but struggle with YA scifi like Cinder). Blurb reminds me of the movie Never Let Me Go.

Added later for the sake of interest:

The Lightning Struck Heart
What I like: I like the color choices and the central image, the legibility of title and author name despite font choices.
Issues: I find the horizontal gradation on the background distracting, it makes me think this is a small image that has been manipulated larger but wasn’t high rez enough; Looks like an old TV.
What do I think this book is about? Future, urban fantasy or superhero, or maybe something epidemic or zombie like The Strain. Definitely dark.
Was I right given the blurb? Not even slightly.

I talk in depth about how I chose my cover art for my indie books in this YoutTube video: what I look for how I choose images and type set and colors.

{Gail’s monthly read along for March 2017 is Crown Duel by Sherwood Smith.}

Romancing the Inventor in Audiobook. A steampunk lesbian romance featuring a maid bent on seducing a brilliant cross-dressing scientist who’s too brokenhearted to notice. Or is she? 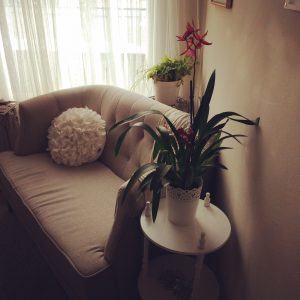 Why Writers Should Read

“A bookstore is a good place to go to be brave.”

Tags: Behind the Magic, Cover, Important For Authors