Soulless, Gail Carriger’s Notes That Started Everything (Behind the Magic of the Parasol Protectorate)

Every year on (or around) October 1, Gentle Reader, I post a bit about the beginning of it all: Soulless. (Soulless, incidentally is on sale at $4.99 (ebook USA) so now is a great time to get others hooked!)

This year I thought I would take you back to the very beginning of everything.

Some time ago, around nine or ten years now, Gentle Reader, an event occurred.

Picture this, little Gail Carriger biding her time, humming softly to herself, in some unnamed hotel somewhere at some unnamed convention. She has just been to a panel called “Escaping the Slush Pile” and she is considering a new project. She jots down some notes in a notebook.

They read as follows…

There it is. The seed that became Soulless.

I had entirely forgotten that I wrote it in first person originally!

After those notes there is a line break, probably signifying a week or so, then a switch in pen color and tidier handwriting, a surefire indication that the Authorbeast has given the project Serious Consideration. 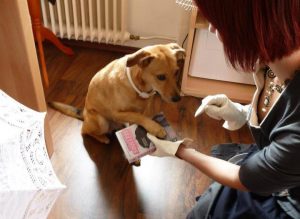 Via Carina “I shield in the name of fashion. I accessorize for one and for all.”

Then comes the heading:

Under that are world building notes, including some on Victorian government and earlier history detailing how the immortals integrated. Then there’s some notes on Victorian Gothic romance novel structures, the beginnings of characters, including Alexia, Conall (who was Conall Goring, Lord Brindle), Ivy (who was Ivy Thistlewaight), Professor Lyall (who had no first name), and Lord Akeldama (who was Lord Ambrose, Earl of Serkan, although I have another side note that says Akeldama “field of blood” is more dramatic).

After that, there’s several pages of mini scenes in the sloppy handwriting of “middle of the night” or “just out of the shower” inspiration. (This is still how I write, sometimes jumping pages or even books ahead of myself to write a scene I see really vividly.)

The first scene written is the one between Ivy and Alexia in the park, but after that most of the others are between Alexia and Conall or Conall and Lyall. 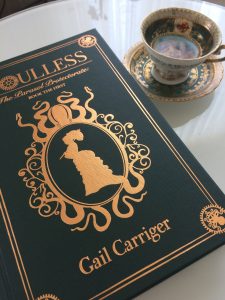 And that, as they say, was that.

I hope you enjoyed this brief glimpse into the creative process of an unpublished author-baby.

Today the Little Paranormal That Could (original code name for Soulless) is eight years old.

And I… need breakfast. 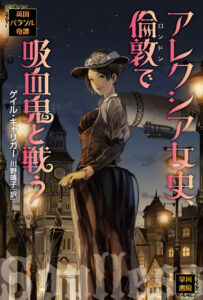 Readers are still finding it for the first time!

Do you want more behind the scenes info and gossip? 7 Key Things I’ve Learnt From A Year of Blogging 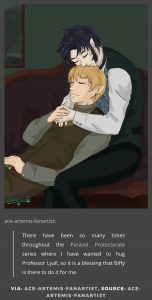 “I can stand brute force, but brute reason is quite unbearable. There is something unfair about its use. It is hitting below the intellect.”