Manners & Mutiny, the final Finishing School book, released in November of 2015. It was the first time I finished a series that had been planned as a series from the very beginning.

Here are some fun blog posts and resources that tie to this book. Research I did, chattering on the subject of finishing a series and its overarching arc. 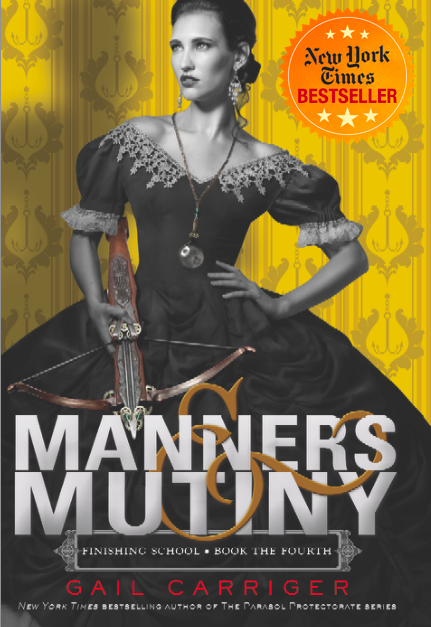 If one must flirt…flirt with danger.

Only one thing is certain: a large-scale plot is under way, and when it comes to fruition, Sophronia must be ready to save her friends, her school, and all of London from disaster–in decidedly dramatic fashion, of course.

What will become of our proper young heroine when she puts her years of training to the test? Find out in this highly anticipated and thrilling conclusion to the New York Times bestselling Finishing School series! 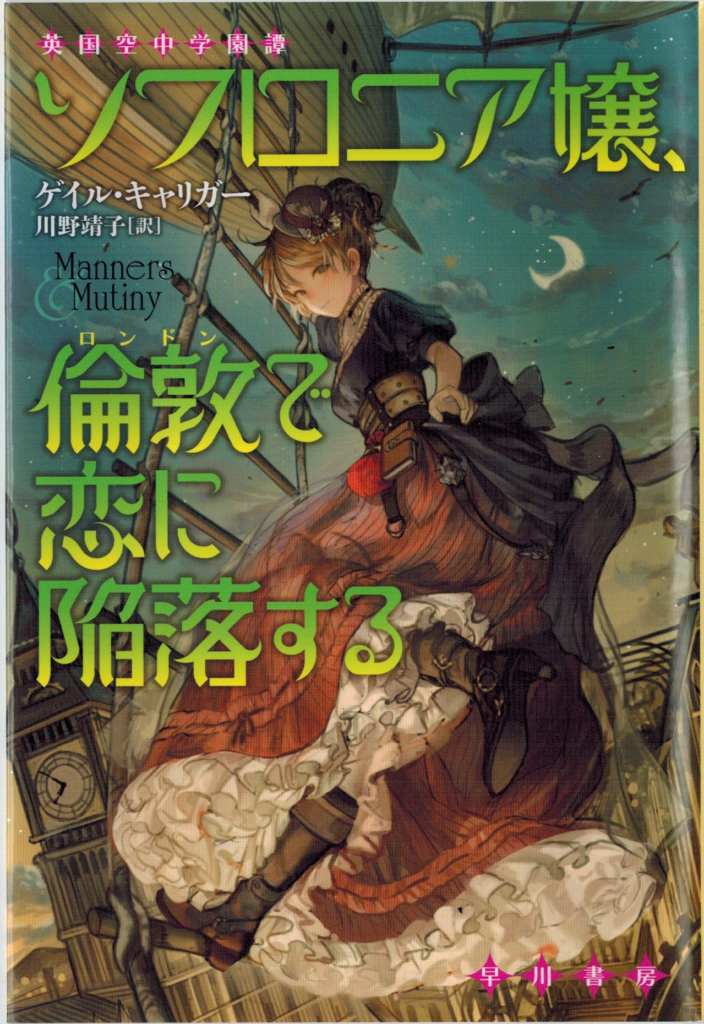 Manners & Mutiny was a New York Times bestseller and was one of Amazon’s November Best Book of the Month, SciFi & Fantasy (2015).

So this was the last in a series which meant I had a lot to tie up.

For this book I ended up using 3×5 cards to keep track of the different threads and plots I needed to wrap up yet maintain pace. Also I wanted to make certain I dropped the right plot points in at the right time without getting too hung up on any one thread. 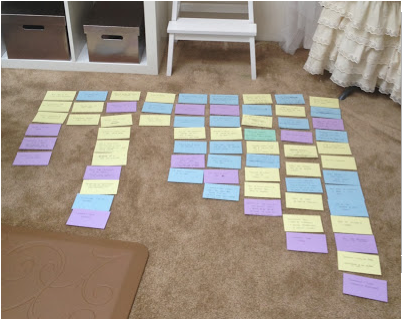 Yellow cards are action, blue are information, and purple is romance or emotional strands. The one green one is the climax/death. They are set out loosely by chapter. (I would later go in and break those chapters down more.)

These days since Scrivener has come into my life I don’t need to do this anymore. 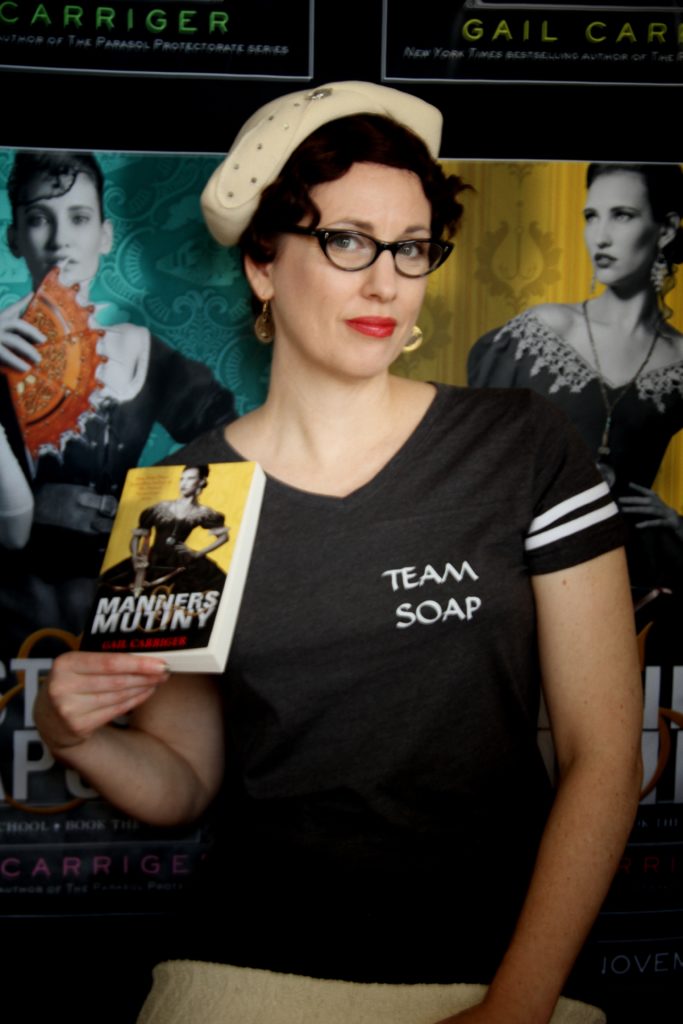 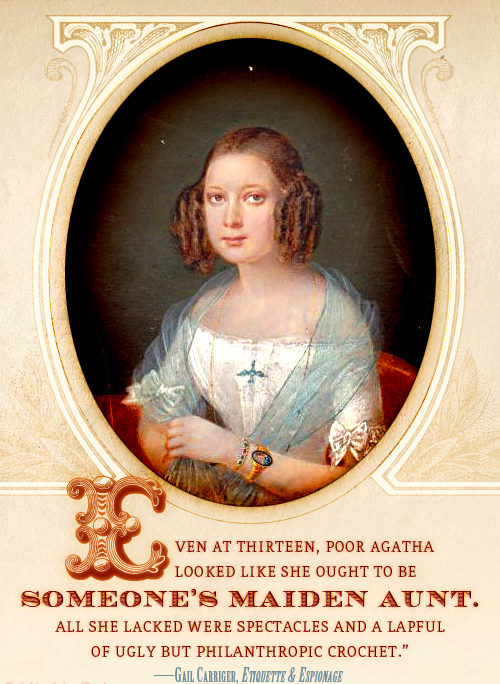 Things Pertaining to this Series

Other characters do have design boards, but I’m not listing them here because they may be getting (or have) their own novellas, will show up again in a future book, or I’m keeping them in reserve for some other reason… in which case their boards have spoiler warning attached.

One of the hosts, Amanda, is here in pickleman costume (with Bumbersnoot) at one of my events: 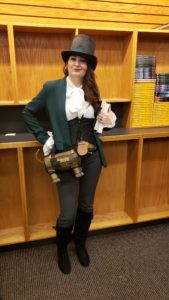 This books ends of a major bang. And yes I knew what would happen to the school, and why. No I did not know the wicker chicken would be so significant.

Here’s its original appearance in E&E…

Well, is that wise? Having a mess of seedling evil geniuses falling in love with you willy-nilly? What if they feel spurned?”

“Ah, but in the interim, think of the lovely gifts they can make you. Monique bragged that one of her boys made her silver and wood hair sticks as anti-supernatural weapons. With amethyst inlay. And another made her an exploding wicker chicken.”

“Goodness, what’s that for?”

People loves the mere mention of it from the first book and just because of fan enthusiasm it became more and more important over the course of the series.

Of course you should watch out for the wicker chicken to show up in in a few other books, as a mark of affection or connection or friendship or something more… 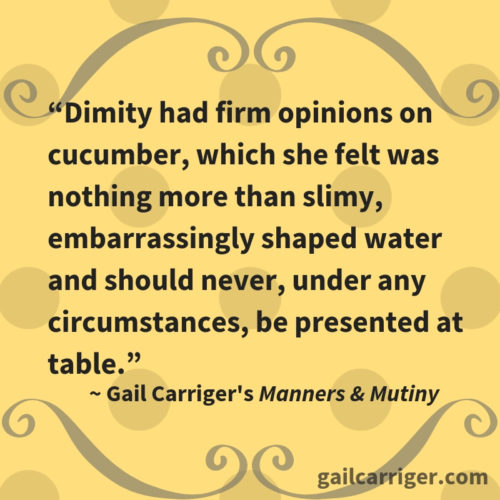 This is decidedly not my feeling on cucumbers, I happen to adore them. But it is one of my best friend’s, who is very texture orientated.

I Am Indeed says of the audiobook:

“Narration is again provided by Moira Quirk and she’s managed to capture each moment, each character with a sense of ‘who’ they are, while not giving away or overworking emotions or a sense that there is more in store for the characters. The words stood solidly as presented, carrying that sense of fun and amusement that is contained within all of Carriger’s novels.”

“This final book in the Finishing School Series is delightful for many reasons. Not just because it wraps this series up in a fantastic way. (I can always count on Gail Carriger to give us an ending I will delight in even when she scares me first) Something about the way her books and series wrap up is just perfect.”

Here I am wearing my Team Soap shirt and Bumbersnoot necklace. 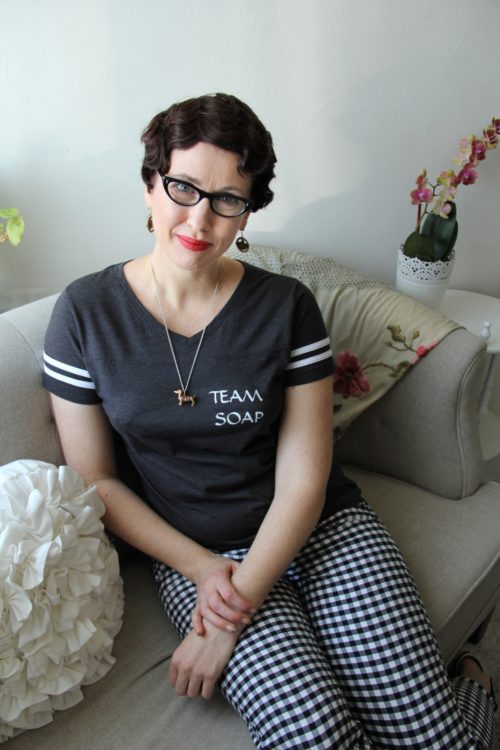 Two of my favorite pieces of merch. This exact shirt is no longer available but you can get the sentiment in any other style or cut or color you like, for men and women.

I really hope you enjoyed this series! I like how tight it is with the four books. It was fun to write knowing what I was working with from the get go.

Always enjoy your thoughts on how everything turned out, you favorite parts, your favorite characters and ones you want to see more of!

Feel free to comment with any questions you have about these books.

Before you ask I’ve no intention, at the moment, of writing more Sophronia & Soap as main characters. I like finishing series, I’m a completest.

But they do turn up in my other stuff, occasionally even together on the page, sideways references and in the shadows. Of course. Because that is where they live.

Yours (decidedly) not in the shadows, 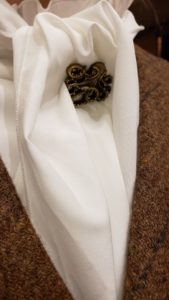 There’s a Weird, Sexist Problem in Fantasy That We Need to Talk About 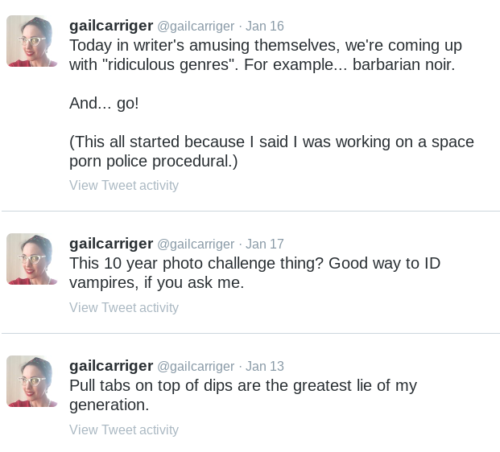 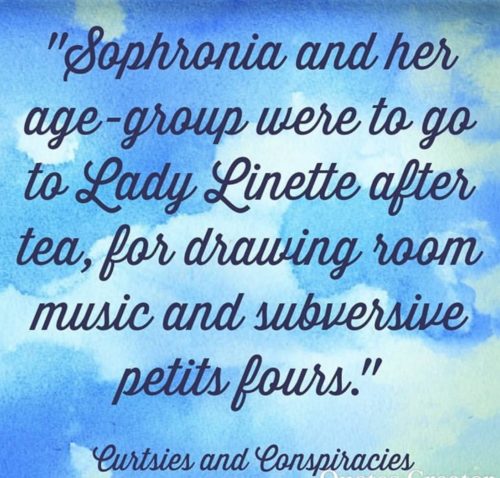