So I took Rue to India in the first Custard Protocol book, Prudence. (Which the Read Along is tackling right now.) It was a lot of fun for the both of us. And, since it’s me, I also kept an eye open to the fashion world. India was an occupied territory during the Victorian times, and fabrics and fashion moved from there across the world and into the lives of Victorians in a myriad of ways. Here are some of the influential images, fashion items, and styles that come up in my books when India is involved.

Not all of the images I collected are strictly Indian. Some are from surrounding occupied territories or highlight other Silk Road influences. Nevertheless, they struck me as quite interesting, so I have presented them for you here.

I dithered on how to show these. I went with some original historical clothing items, along with some Victorian and later takes on the same theme and, where possible, a modern fashion look. Also there’s jewelry! So it’s kinda a mess, but I still hope you enjoy it.

“This evening dress is decorated with net panels embroidered with gold thread and beetle wing cases from a species of jewel beetle. The panels were probably made in India where Madras and Calcutta were centres for beetle-wing embroidery made for the European market. The iridescent blue-green beetle wing cases reflect the light like sequins. This type of embroidery is found in British museum collections on dress, textiles and accessories dating from the 1780s until about 1930. Although Indian embroiderers introduced the technique, using it to decorate dress and domestic textiles, Europeans copied them, sometimes using the wing cases of a species of South American jewel beetle. This style of embroidery was also thought to be a suitable pastime for ladies of leisure, who were advised to use a Walker’s number eight needle and green silk thread.” 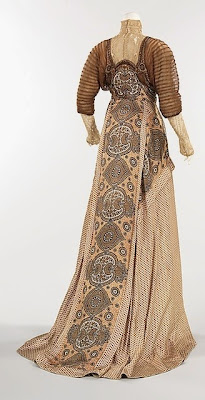 A variation of this post originally appeared in Retro Rack.

Yours (ever obsessed with sari fabric and Indian textiles), 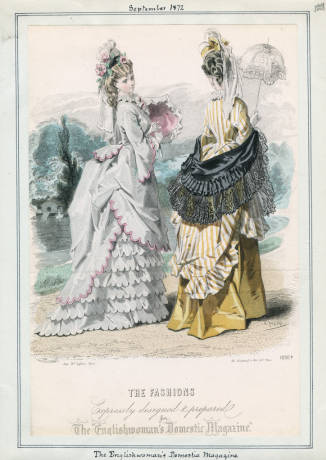 History Wasn’t White. Why Should Historical Fiction Be?

The Shameful Narcissist says of Soulless:

“…it’s truly the characters and world that give Soulless its spirit.”

“The fact that it’s tactless doesn’t make it untrue.”