I love me some Victorian sportswear, Gentle Reader.

In How To Marry A Werewolf, Faith the main character (an upstart American girl) is a proponent of the great freedom and joy in the bicycle suit.

In Reticence, new character Arsenic wears all manner of sportswear from a golfing costume to a bicycling suit as well. Because she’s a doctor, she also doesn’t bother with hat (falls off, gets in the way) or gloves (how you supposed to stitch up a would with gloves on). And she usually has some kind of pinafore or apron over the top of everything.

Fashionable Reader, these articles of clothing were considered quite the SCANDAL at the time!

Possibly, just possibly, there is a bit of rebellion in this choice, but I can imagine no matter what both ladies love the freedom of movement granted by such attire.

I have a bit of a passion for vintage bicycle riding gear.*

And this before I learned that there is some significant connection between the advent of bike riding and women’s liberation.

At first women’s bike riding attire is not so different from other exercise attire of the late 1870s early 1880s. Which is to say, to the modern eye, not very exercise orientated at all.

But if you look closely you can begin to see the concept of freedom of movement (fewer undergarments, easier to get in and out of), and the importance of exercise (shunned in the early Victorian era as countrified and sporty) slowly embraced.

“Let the skirts be as short as possible – to clear the ankles. Nothing else is permissible for mountain work, where one must face bogs, deep heather, thorny gorse, and must not stumble into the hem of one’s garments on the face of a rocky precipice. I must, however, draw the line at the modern feminine costume for mountaineering and deerstalking, where the skirt is a mere polite apology – an inch or two below the knee, and the result hardly consistent with a high ideal of womanhood.”

And the style of bicycle attire combines this notion with that of equestrian and riding wear. 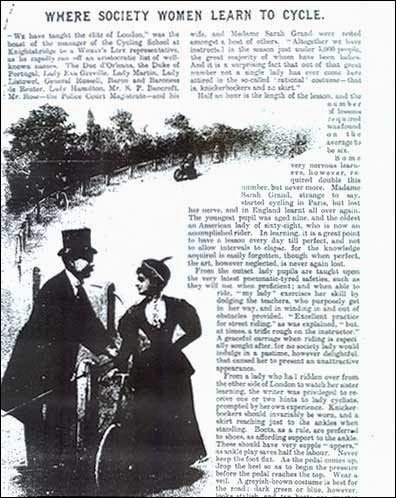 Then, finally, with the advent of access to higher education, rise of the middle class, the suffragette movement and the right to vote, better understanding and use of heath care particularly with regards to procreation, everything changes and, most germane to this blog… women wear trousers.

Staring in the 1890s it becomes mostly acceptable for women to wear voluminous (but still actual) trousers to bike ride.

By 1895 we see large scale advertisements, and some lampooning in the popular press, but generally it’s clear that only the most elderly sticklers objected to the style.

And this wasn’t just in England, either. America, and indeed much of Europe, embraced the look.

A great deal of the inspiration for this attire has its source in men’s hunting garments.

Bike wear for ladies involved heavy material: lots of country Harris tweeds, the early onset of houndstooth, all very much Too the Manor Borne. (This becomes quite a problem for Arsenic in Reticence.)

If you want to read a fun comic novel set in the 1900’s featuring a New Woman and her fiscal and literal liberation via the bicycle, you can do no better than Miss Cayley’s Adventures by Grant Allen.

And what happened after the turn of the century?