Reticence may have Percy on the cover but it opens with a fabulous new character, Arsenic! This is a teaser post and shouldn’t contain any spoilers so… read on!

Arsenic turned the advertisement over in her hand. She’d spotted it three days before, in The Mooning Standard, which was a very forward-thinking paper. Yet it went beyond her expectations. It was, in a word, ideal. The author of such an oddly worded advert might be convinced to overlook her greatest failing as a doctor in the eyes of society: being female.

She read it over for the hundredth time. That last line was a corker. Arsenic knew of very few doctors who would put up with both explosions and cats. Or explosions caused by cats. She was one of the few. As you can see, in Reticence we meet one of my most favorite new characters, Arsenic Ruthven. You can visit her inspiration board on Pinterest. Mild spoiler in the description if you didn’t already get it from her name.

Arsenic is partly driven into become a doctor to make amends for her mother’s profession. Arsenic is one of several sisters, all named after different poisons, and all much beloved by their doting father and in awe of their somewhat distant mother. (Spoiler behind the link, but if you want to read about how Arsenic’s parents got together, I wrote that book. Otherwise I hope my faithful readers will have fun figuring it out.)

Arsenic turned to look curiously at the cheerful captain. “He tried to kill you?”
“Obviously he wasn’t successful.”
Arsenic nodded. Obviously. “My mother would say that shows a lack of follow-through.”
The captain grinned. “Your mother sounds logical.”
Miss Tunstell added, although not critically, “And a little bloodthirsty.”
It was a fair assessment. “You’ve no idea,” replied Arsenic, because it seemed they really didn’t.

Like Faith (How to Marry a Werewolf) Arsenic is very practical in her manners and mode of dress. She takes blood spatter into account and mobility, she was a former battle field surgeon. I did a lot of research for writing a lady doctor in the late Victorian era. Wanna peek? Here are some interesting tidbits on the advancement of women gleaned from Godey’s Lady’s Book 1872.

On the Higher Education of Women in the United States

“Our readers are aware that a munificent offer of $250,000 has been made by Mr. Sage to the trustees of Cornell University, on condition that young women shall be admitted to the advantages of that institution on the same terms as young men. A correspondent states that President White, after having examined the practical workings of the co-education of the sexes at Antioch, Oberlin, the Michigan University, and several other institutions of less note, declared, in a recent speech, “that he was heartily glad that Mr. Sage had made this offer, and he should do all that he could to promote its acceptance.” Later accounts state that the gift has been accepted, and that the new buildings which will be required are soon to be commenced.”

A New Profession for Ladies: Dentistry

“We learn from the German papers that a young lady recently presented herself at the Faculty of Medicine at Munich for examination for a license to practice as a dentist. Being refused, she went to Erlangen. The question was here referred to the government, who at once authorized the examination on the ground that it was absurd to exclude a person desiring to submit herself to authorized professional tests of ability by reason of her sex. The young lady triumphed, and is likely to find immediate imitators.”

An English Lady, Mrs. Chaplin Ayrton, has just passed her second professional medical examination (anatomy and physiology) in Paris, with the note of “very satisfactory,” the faculty having, with the liberality to strangers for which they are so justly renowned, accepted that lady’s certificates from Apothecaries Hall and the Edinburgh University as equivalent to a “degree” in letters and science and to their first professional presented herself for the first professional examination (chemistry, physics, natural history, and botany), also passed with “very satisfactory.”

In line with the above image… 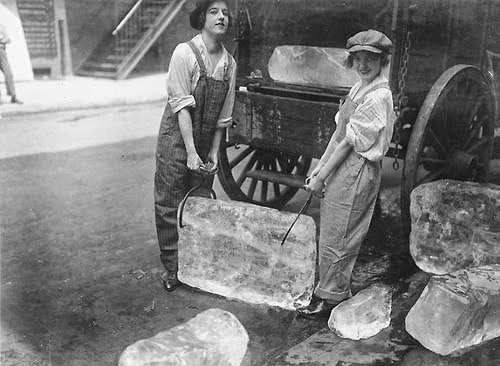 Women Delivering Ice in 1918. I love this picture, it’s so very Vieve.

To give an idea of what they were up against:

“Truth is, the female sex is really as inferior to the male in vigour of mind as in strength of body; and all arguments to the contrary are founded on a few anomalies, or based on theories that can never be reduced to practice.”

“Men make fortunes, women make livings. And none make poorer livings than those who waste their time, and bore their friends, by writing and lecturing upon the equality of the sexes, and what they call “Women’s Rights.” How is it that most of these ladies live separately from their husbands; either despising them, or being despised by them?”

Yours never wanted to be a doctor but always fascinated by the profession, From Arsenic to Electricity: A Brief look at Victorian Hair Removal

This is a soft launch for a hopefully annual event that is designed to facilitate community ties between romance readers and local bookstores.

“Men don’t think any differently from women – they just make more noise about being able to.”

~ Tamora Pierce, The Woman Who Rides Like a Man