Most gowns and dresses were in two or more parts:

The two were sewn (yes on the wearer), tied, or hooked together. (This continued into the Edwardian era.) 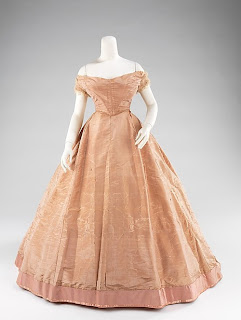 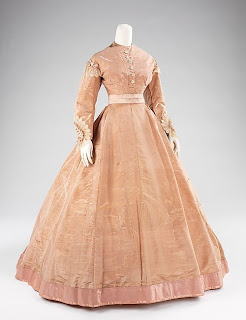 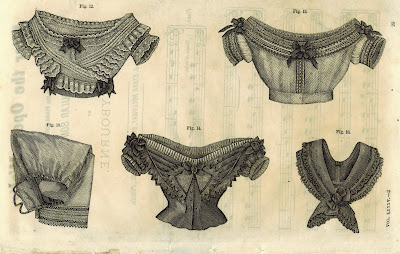 Godeys July 1872 Fig. 12 Low muslin bodice for a white French muslin dress, trimmed with lace and colored ribbon brows. Fig. 14 Pink silk bodice far an evening dress, made with plaited bertha, edged by points bound with satin; a ruche of illusion inside of neck and sleeves. Fig. 15 Ladies drawers, made of muslin or linen, trimmed with tucks, tatting insertion, and tape trimming. Fig. 16 Piece to wear over a surprise dress of black grenadine, made of blue China crape, trimmed with white lace. 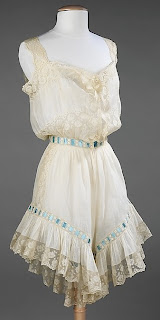 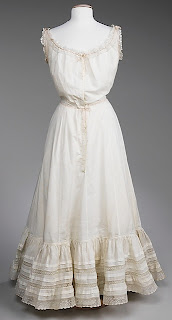 Under, depending on time and class, was called a… 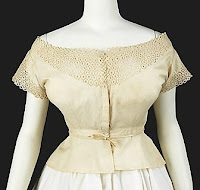 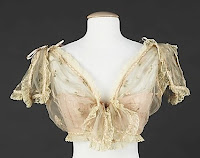 Over was usually called a camisole (yes called same thing as above) or a corset cover.

Then the bodice of the dress, that’s so long as there wasn’t also a chemisette/collarette (which is a little like a Dickey) required for day (see next section #3). Agatha refers to her collarette as her “lace tuck.”

Godeys July 1872 Ladies’ corset, made of fine linen, and edged with a narrow Valenciennes lace around the neck. Ladies’ chemise, made tightly gored, with puffs set in the front from the neck down, insertion and edging around the neck and sleeves. 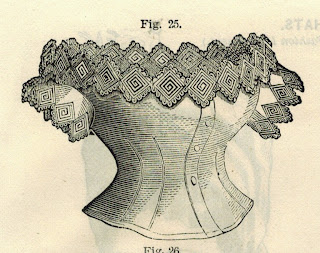 Godeys Nov 1872 Corset cover for lady, made of fine linen, and trimmed with medallions of embroidery and lace. The sleeves are trimmed to correspond.

Sleeves could be detachable (like those worn by bakers to protect the bottom of their sleeves from flour) and were called undersleeves. 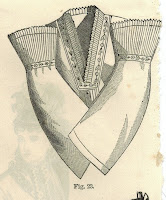 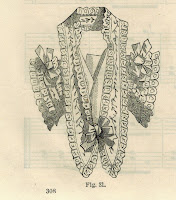 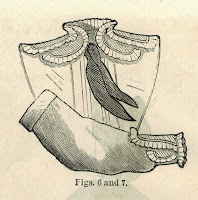 Godeys Oct 1872 Open habit shirt and sleeves, made of fine muslin ruffles plaited, and embroidered insertion; and Undersleeves and collarette, made of muslin, embroidered and trimmed with Valenciennes lace; Godeys Sept 1872 Collar and under sleeve, made of linen tucks and narrow ruffles; the collar is to be worn with a surplice dress.

In the 1890s there was a brief fad for cage sleeve supports as well. 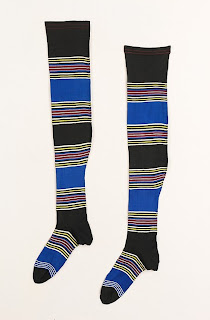 Stockings could be very colorful and were held up with garters (not a garter belt), or garter straps which were attached to the corset and went down over the drawers and bottom part of the chemise often causing them to bunch up. 5. Drawers: To Split or Not to Split?

Split drawers appear in the late 1840s and continue through the 1910s but drawers were also sewn closed during the Victorian Era.

During the Regency Era evidence suggests drawers were not split, but then, corsets were so short drawers didn’t need to be split as the waistband rarely tucked tightly under the corset. 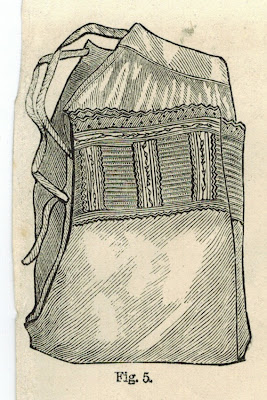 Godeys Sept 1872 Ladies drawers trimmed with rows of insertion and tucks, finished by a lace edging.

A further note on drawers:

In England, even during their surge in popularity in Europe, women did not wear pantalettes (ankle length drawers) only young girls.

Later period knickerbockers were shorter and more practical than drawers but did not entirely replace them.

Bloomers is a term not really used in England until after 1910 (Amelia was American).

Bust improvers were introduced in the 1880s, so yes, the Victorians stuffed.

In the 1860s some undergarments were made of chamois leather, for added support, and layered over cloth.

I had a hard time finding a picture of this, although written evidence abounds, but here are some leather stays from the time. Speaking of which, corsets were never talked about in public. If for some reason they had to be mentioned (between ladies of the same age, or in written form), they would be referred to as stays or (better) foundation garments.

The word corset appears to be mainly used in late period advertisements. Whether there was a recognized difference between the two terms at the time is unclear.

Godeys Nov 1872 Waist for child of a year old, to button skirts on, made of white muslin, trimmed with worked edging. Ladies chemise yoke and sleeves, made of insertion and tucks edged with lace. 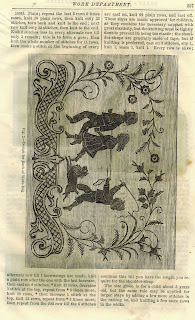 Knitted waist for a child.

With the exception of some tea gowns and carriage dresses worn, if a lady was daring enough, without stays, it was actually very hard for an upperclass woman to dress herself (or undress, for that matter).

(Yes, I’m aware of the recreationest YouTubes out there claiming this isn’t true (but note her dresses button up the FRONT and she is very relax laced). Frankly, I can get into my own full Victorian (hooks and eyes up the back), but I’m never laced tight, I’m never sewn in, and I’m never fully period accurate, because… I’d need a maid!) 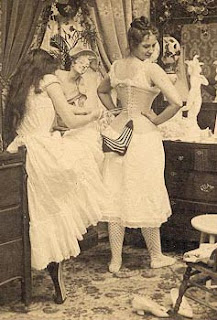 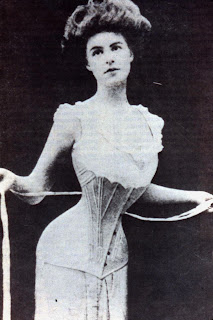 Not how to lace; going at it alone

Yes, if you are flexible you can button up the back of your own bodice, or even lace your own corset, but most gowns were custom designed to go over a tighter lacing and that requires a dresser or lady’s maid (unless you’re wicked strong and flexible).

Speaking of which, corset laces are pulled tight to either side, not straight back. Images like the one above are a joke and the technique would not be effective. And yes it is entirely possible to lace your own corset.

Gowns had designated times and places they could be worn: from sportswear specific to event specific to occasion specific to time of day.

This changed throughout the Victorian era. 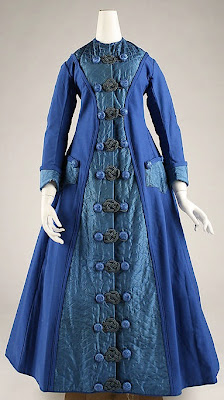 Dressing gown intended to be seen only by a lady’s maid and possibly husband. Tea gown worn informally about the house seen by staff and family but not visitors unless very intimate.

Here’s a short list from Gail’s memory (a lady did not need to actually have one of each!): 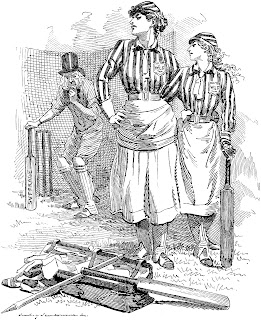 Plus many of the same in various shades of mourning (full mourning, half mourning, and mauves for extended mourning for the pious). 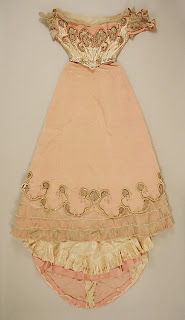 Evening Dress and matched Shoes 1889  The Metropolitan Museum of Art

The lower classes usually had about three dresses: a working dress (sometimes this could be a uniform or livery), a day dress (for home activities usually worn covered with a pinafore or apron), and Sunday Best.

Much of the same holds true for a man

Which is to say:

Yours with a new clothing rack for the new office… Hidden Brain Podcast: Rebel With A Cause (very interesting for artists, authors and other creatives).

How to use dashes in fiction: UK and US style

I love me some dashes, but I have SERIOUS opinions on them. If I see a flipping closed-up em dash, I lose my tiny mind. It is horrible for both spacing on a printed page & ebook formatting. It is a convention that needs to DIE. I was once chatting with author friend Alex White in a cafe about a new ridiculous story idea.
A gentleman at the next table said, “I couldn’t help but overhear, that sounds like something Gail Carriger would write. Have you heard of her?”
And I was like, “Well this is awkward.”