How Does the Peerage Work in the Parasolverse? Occasional FAQ

There’s this scene in the mini-series called The Buccaneers (based on the Edith Wharton novel), where Jacky is teaching the girls how the British Peerage works. It’s riveting, if only a minor bit of characterization, but it’s imprinted on my mind.

So when it came time to rewrite Victorian London to incorporate immortals, it’s possible I spent too much time on the peerage. 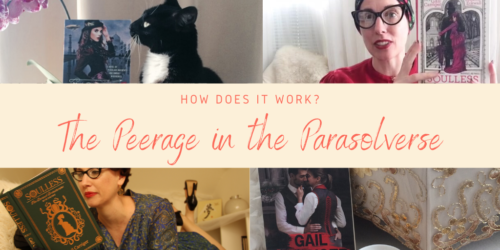 I’m not going to go deeply in the Order of Precedence, I trust you, Gentle Reader, can do that research yourself.

I tend to circumvent the particulars in two ways: first most of my stories take place among the gentry not the peerage, and second most of my characters exist on a level of familiarity with one another that allows formalities to be less strict.

Here’s how I made mine work: 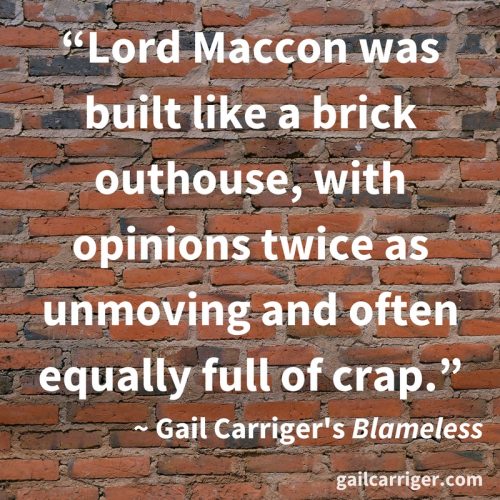 It is always a terrible inconvenience for the government when a member of the nobility, already holding, becomes either Alpha or vampire queen. However this is also very very rare. And then there’s Lord Maccon.

So Lord Maccon, in his original state was Alpha of Kingair. However, he was a true peer when he was changed. He would have been Conall Maccon, Laird of Kingair, variously called Lord Kingair, or just Kingair, or The Kingair. As he had children, mortal, before he changed into werewolf, his male heir would have inherited his peerage (the Laird title) at the point of his undeath, making his son Laird of Kingair, or Lord Kingair. This is why Conall would then be known as Lord Maccon instead (since he held the land but not the title).

When Lord Maccon moves to London and successfully challenges the existing Alpha, Lord Woolsey, for ownership of the Woolsey Pack, he took on the title of Lord Woolsey and became the Earl of Woolsey. Successful werewolf challenge is recognized by the Crown as the wolf version of inheriting peerage. I know, confusing, but we’re talking the British aristocracy here mixed with my world building. However, Conall mainly prefers to go by his original title of Lord Maccon (possibly because of the negative associations of the Woolsey title brought about by the previous Alpha).

When the vampires take over Woolsey Castle and the wolves move to London, Countess Nadasdy should now be technically Countess Nadasdy, Lady Woolsey. Lord Maccon now has no proper holding, his territory is urban, he might be properly called Lord Maccon, Earl of London, although that is not legally possible. So he is now a peer without a holding, luckily he can keep going by just Lord Maccon.

Prudence, adopted into Lord Akeldama’s household and title (and who knows where that comes from) is, by rights as adopted first born (so long as Lord Akeldama is truly considered a member of the daylight nobility) Lady Akeldama. However, to prevent being confused as his wife, she might chose to be referred to under her first name, as Lady Prudence (although we all know how much she hates that).

Since her very existence monkeys with the system you can see how the Queen might be annoyed by everything about her. Ivy, on the other hand, is brought up into the peerage as a commoner by virtue of becoming a vampire queen. She is granted a peerage as a baroness, and is now technically Lady Tunstell. Since this is not a daylight peerage, however, her children from her previous mortal life, Percy and Primrose, do NOT hold titles.

She is also given a territory by the crown, Wimbledon, so could be called (and might be in a kind of slang manner) the Baroness of Wimbledon. However she has no holding rights to that territory, she cannot collect rent, for example, so must earn her income, as most vampires do, through trade and investments.

One of the reasons I, as an author, transferred many of the existing hive with Ivy from Egypt is to give her a solid income and great trade ties to Alexandria, one of the biggest port cities at the time. Many of the English vampires also have their mitts in the East India Company, a very lucrative concern. This also explains how the East India company got so many concessions out of the British government, and why their nickname was Bloody Jack.

However, there is also the embarrassment of the drone/claviger process for consider. 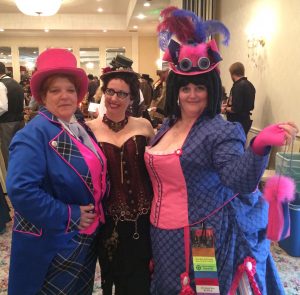 Drones and clavigers are a carry-over from the guild-apprentice system. In both cases, if a young person is interested in immortality they technically petition to be indentured to a hive/rove or pack/loner. This is a kind of legalized servant/patron contract where the drone/claviger is bound to either the hive/pack or to the Alpha/Queen/Rove/Loner. Whether they belong to the group as a whole, or an individual alone is key – it’s like the difference between being a butler to a household or a valet to an individual.

Being bound to the Alpha, for example, ensures you will stay with him if he leaves his pack, it also means you serve him, like a valet. Tunstell is indentured to Conall specifically. Only Conall can release him from his contract. The servants in the hives, and most of the clavigers in the pack, are indentured to the household as a whole. They provide food to vampires, and safety and protection during full moon to werewolves (the name claviger means key-holder). In turn the supernatural creatures train them for various trades, education them in the ways of the immortal world, offer them patronage and money for their various artistic pursuits and, eventually offer them the option to try immortality (not all clavigers/drones are in it for the immortality).

You can see how, due to the servile nature of supernatural indenture, noblemen might dislike this part of the process and not want to try for immortality because of it? In fact, this is part of the reason it’s set up that way. Immortality is designed to bring up commoners into the aristocracy as vampires and werewolves, of which there are few made and who can’t produce children.

Still there are some who take the risk anyway, like Tizzy, for love, or money, or a chance at immortality. Or because of the liminal natural of the supernatural, that allows in my universe for a certain freedom of manner in the bedroom… shall we say?

Can I add how much I enjoy the term indenture when applied to werewolves and vampires? After all, the root of the word is “denture” teeth. Wanna know why?

“Identical copies if the contract were made on the same piece of paper; it was then torn along a jagged, toothlike (“dentures”) edge, leaving each party with a copy that – when fitted together with those other – would prove that it could only have been the counterpart of that one other piece of paper” 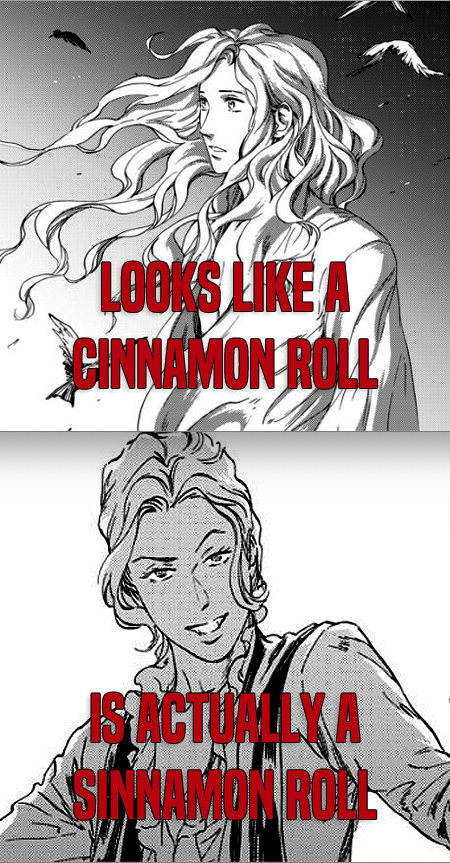 Which brings us to someone like Lord Akeldama – a rove.

He has indentures but clearly the contract is much less restrictive than a hive. His drones have a great deal more freedom. Perhaps this is because he must ally, politically, with a vampire queen to petition for his drones to be bitten? Perhaps because, as a rove, he himself has a great deal more freedom, his drones/vampire relationship is more relaxed and a less like servitude?

From a human looking to become immortal, this makes the choices of who you petition to become drone or claviger more complicated and a matter of weighing advantages and drawbacks of hive vs. rove, pack vs. loner, werewolf vs. vampire.

So there you have it, a very long blog post for today, I do hope that you have enjoyed it!

Here’s a few fun articles that might also interest:

Yours (destined to die on the alter of research), 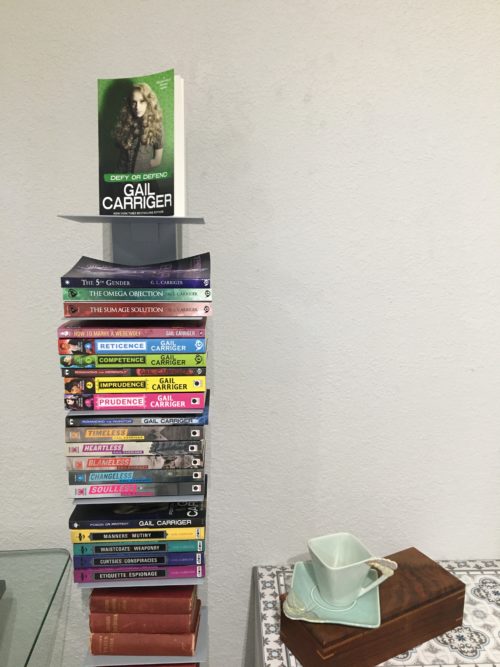 11+ Years of Work in One Picture

“…it was a delightfully light book I needed to remind me that I really do want to go reread Soulless and the Finishing School books and to wonder just which of my jewelry could be redesigned to be slightly more dangerous.” 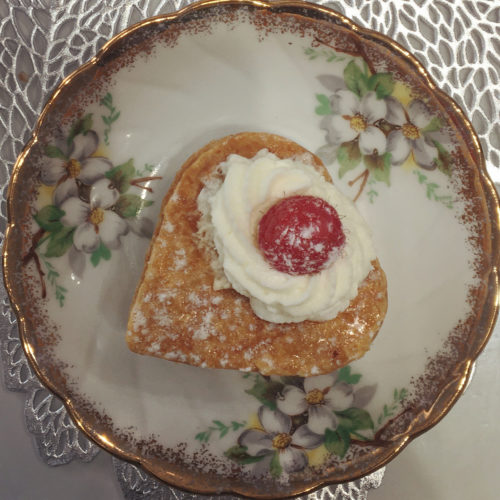 A Day in the Life of a Public Librarian 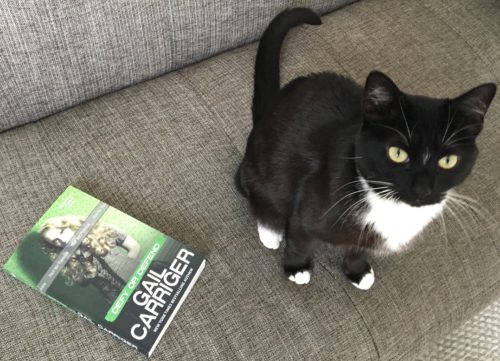 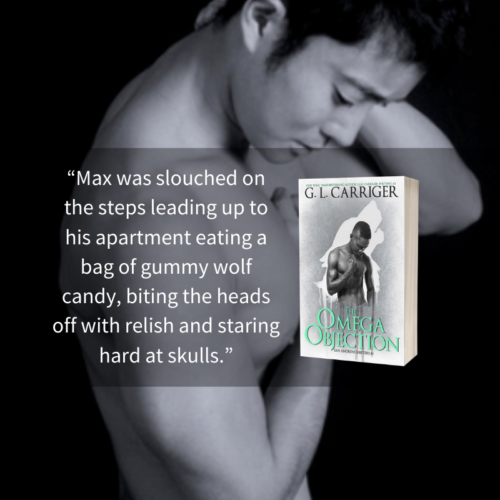