Biffy appears briefly in the first Parasol Protectorate book, Soulless as a minor drone and then becomes gradually more important as the series progresses. In Changeless he plays a key role black in London spilling a cup of tea.

In Blameless he is the catalyst for much of the events of Lord Maccon’s story line.

And has a whole new life by Heartless.

Finally, in Romancing the Werewolf he get’s his happily ever after!

A personable young man appeared at his elbow with a solicitous cooling cloth draped artistically on a silver tray. Lord Akeldama dabbed at his brow delicately.

“Oh, thank you Biffy. So thoughtful.”

Biffy winked and skipped off again. He displayed impressive musculature for all his grace.

Lord Akeldama watched the young man walk away appreciatively. “I should not have favorites, of course…” he sighed.

(Lord Maccon has changed out of wolf form unexpectedly ,and is left naked in the streets of London.)
A toff of the highest water, dressed to the nines in a lovely cut-front jacket and stunning lemon yellow cravat, tied in the Osbaldeston style, materialized out of the darkness behind a brewing pub, where no toff had a right to be. The man doffed his top hat amiably at the naked werewolf.
“Why, I do declare, if it isn’t Lord Maccon. How do you do? Fancy, aren’t we a tad underdressed for an evening’s stroll?” The voice was mildly familiar and laced with amusement.
“Biffy,” said the earl, on a growl.
“And how is your lovely wife?” Biffy was a drone of reputation, and his vampire master, Lord Akeldama, was a dear friend of Alexia’s. Much to Lord Maccon’s annoyance. So, come to think of it, was Biffy. Last time the drone had visited Woolsey Castle with a message from his master, he and Alexia had spent hours discussing the latest hairstyles out of Paris. His wife had a penchant for gentlemen of the frivolous persuasion. Conall paused to deduce what that said about his own character.
“Hang my lovely wife,” he answered. “Get into that tavern there and wrestle me up a coat of some kind, would you?”
Biffy arched an eyebrow at him. “You know, I would offer you my coat, but it’s a swallowtail, hardly useful, and would never fit that colossal frame of yours anyway.” He gave the earl a long, appraising look. “Well, well, isn’t my master going to be all of a crumble for not having seen this?” Biffy is one of those characters who was never meant to be a main dish, as it were, but seemed to have a lot to say for himself and took over as a result. By the last book in the series, Biffy is a main character.

Here is a collection of images that remind me of Biffy. Gail interview up with the Short Story Geeks podcast. 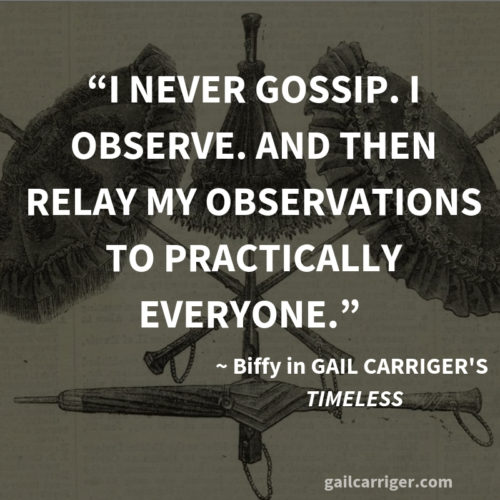