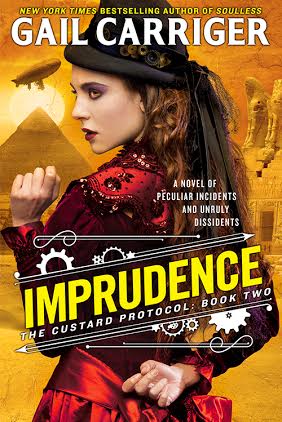 Gail discusses cover art and the release of Imprudence in paperback.

Book 2 in The Custard Protocol  Series

Rue has family problems as well.

Worst of all, Rue’s beginning to suspect what they really are… is frightened.

Imprudence was a Barnes & Noble B. Dalton and Locus bestseller.

“Carriger’s trademark wit and whimsy are in evidence from the very first sentence, and the result is an inventive madcap adventure across a reimagined British Empire that recalls the best of her Parasol Protectorate.”

“The continued fantastical adventures of Prudence Alessandra Maccon Akeldama...are as charming as the first book in the series....For a silly, fun escape from day-to-day dirigible-less doldrums, Imprudence is required reading.”

Gail discusses cover art and the release of Imprudence in paperback.