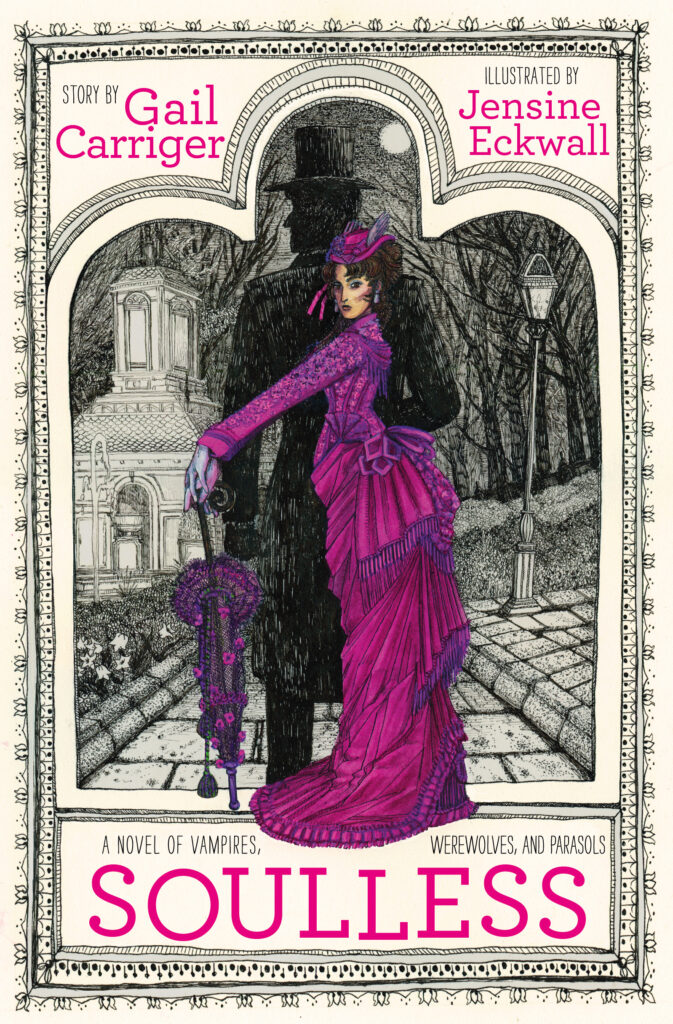 Peek Beneath the Cover?

This cover was a finalist for a 2019 Chesley Award in Best Illustrated Hardcover.

Soulless was a New York Times and Locus (#2) bestseller; Publishers Weekly Best Book (2009); made IndieBound November 2009 Notables, Audible.com Best of 2010, and Locus Recommended Reading lists; was an Audible.com Top 20 Sleeper Hit; was nominated for the John W. Campbell (2010) and Compton Crook (2010) awards; was a finalist for the Locus Award for Best First Novel (2010) and PEARL Award in the New Author Category (2009), and won an Alex Award from the American Library Association.

“Intrigue, flirtation, a mysterious order with nefarious intentions and treacle tart ensue. Carriger manages to strike a skillful balance between mystery and romance…”

“The wit and humor of Soulless left me giggling out loud and blushing furiously. The world Carriger creates is meticulously put together much like the Victorian ladies of old. The characters are delightful, charming, and perfectly flawed. You cannot help but adore them.”

Of Books and Baily

“I can’t wait to read the next book.. this book has everything you are looking for romance, steam punk, vampires, werewolves and 19th century language!”

“I would love a jaunt through Hyde Park along with Alexia and Ivy Hisselpenny, even if she does wear hideous hats.”

“From the very first pages I found these characters irresistible. Alexia is witty and has some modern ideas but she is still a proper Victorian lady. I loved how Carriger created a strong lady of her time rather than a lady out of time.”

Keep Calm with Books and Coffee

“The plot moved along in a sprightly manner. The characters were quickly sketched and sharply drawn. Carriger assumes that the reader can put together what alternate London would look like. The whole read was a delight.”

“The heroine had me laughing out loud several times, and the whole plot line filled with mystery, a dash of romance, also had me devouring the book all in one sitting.”

“The author is amazing in her inclusion of LGBT characters to her Victorian society. I love having LGBT characters that are fully realized, nuanced, and important to the story be included, since so many authors either don’t include any LGBT characters, make just a passing mention either them or their LGBT-ness, or have a LGBT character who is there just for representation purposes.”

I Read What I Want To