This is a reboot of a blog I did back in September of 2009 when I was first launching Soulless into the world.

I’m an archaeologist and I’m constantly distressed by history.

Back in my days as a practicing archaeologist, I was constantly distressed by history. This was, as you may well imagine, professionally terribly embarrassing, but the logic of history all-too-often defeated me. (Of course, this is because history isn’t logical.) One has only to look at the British Empire. I mean really, how did they manage it ~ one tiny island taking over the world (as Eddy Izzard has it) through the cunning use of flags? 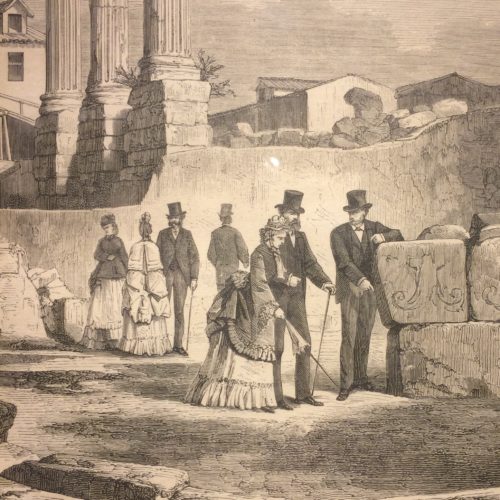 My initial theory was that the British were on the hunt for better cuisine and simply occupied other countries as an afterthought. This is rather close to my theory on the Vikings. Why all that raping, pillaging, and slicing people open from the back to eat out their hearts? Clearly, the Vikings were suffering from a bad case of nose envy. Ever visited a Scandinavian country? Big tall strapping blonds ~ teeny-tiny noses. There they were and they just got jealous.

“Look at all those other European countries, Urk! Nicer weather, more sun, AND better noses. Get ’em!”

Plus all they had to drink was mead, terribly girly drink for big strapping blonds with horned helmets.

The thing was, that as I poodled about through my daily job, I constantly encountered some new form of oddball historical behavior. I visited Machu Picchu, an enormous “ritual” center perched atop a mountain no sane person would ever want to climb. I’m holding forth that it’s a Peruvian attempt to compensate for certain deficiencies in the stature arena. And before you slag me off for bias, many of my closest friends are short. And I keep threatening to take them to Peru to go shopping. Now, back to England. It seems to me that another perfectly valid explanation for the success of the British Empire is that Queen Victoria had vampires (with all their years of knowledge) helping her strategize, and werewolves fighting in her armies, while the other European countries didn’t. At which point it became patently obvious that any such entirely absurd idea (yet nicely logical) would have to become a book. After all, I couldn’t very well write about the Viking nose issue, now could I?

“A book reads the better which is our own, and has been so long known to us, that we know the topography of its blots, and dog’s ears, and can trace the dirt in it to having read it at tea with buttered muffins.”

Tags: Behind the Magic, Parasol Protectorate