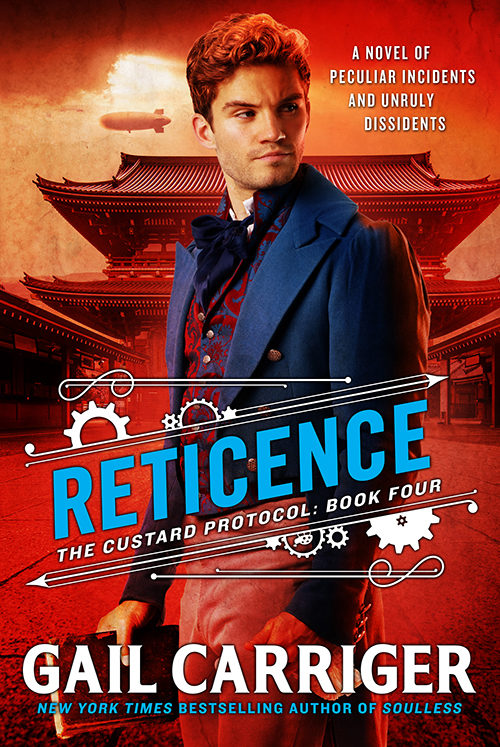 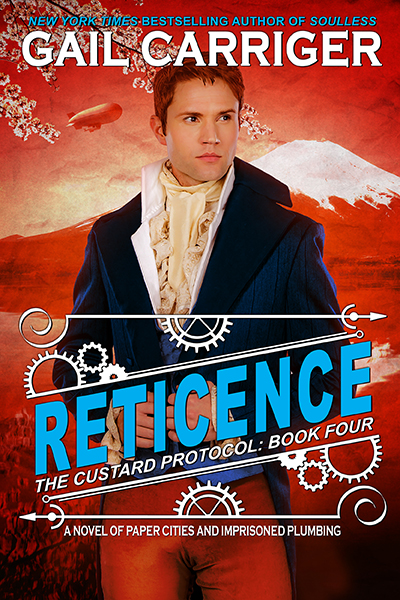 Book 4 in The Custard Protocol  Series

Bookish and proper Percival Tunstell finds himself out of his depth when floating cities, spirited plumbing, and soggy biscuits collide in this delightful conclusion the Custard Protocol series.

Percy has always been on the outside – dispassionate, aloof, and hatless. But accidental spies, a trip to Japan, and one smart and beautiful doctor may have him renegotiating his whole philosophy on life. Except hats.

The Custard Protocol series is Firefly goes steampunk fantasy and it’s perfect for fans of Lindsay Broker, Richelle Mead, or Genevieve Cogman. If you like Percy and Arsenic’s dynamic, then you should also try Carriger’s Poison or Protect.

Yes Gentle Reader, Reticence is the final book in the Custard Protocol series. It takes place after events in Competence and contemporaneous with those in How to Marry a Werewolf.

The Spotted Custard crew is back for one last rollicking adventure! Watch me tie up all those loose threads. Look out for appearances from beloved Parasolverse characters (and some less beloved) and learn everyone’s secrets… the hard way.

This one is absolutely and utterly for YOU, Gentle Reader. Gear up, you’re in for a particularly puffy final float! You have been warned. Why am I ending it?

Are you outside the USA or Canada?

This book has a different cover overseas. Here’s why. Concerned about anything to do with the two different editions? Gail did a video for you!

Reticence was an Amazon, Locus, and #1 Borderlands bestseller.

“Beautiful descriptions of Edo’s floating Paper City and other Japanese-inspired traditions adds to Carriger’s already richly built world. One of the biggest draws of Carriger’s steampunk travelogues is the writing style, and she again delivers witty dialogue and amusing internal monologues. This may be Carriger’s final Custard Protocol novel, but hopefully we’ll see more adventures set in her much-beloved, neo-Victorian setting. ”

“This charming conclusion to the Custard Protocol steampunk series (following 2018’s Competence) sees the unorthodox crew of the good airship Spotted Custard taking on a new ship’s doctor before setting forth for Japan to investigate rumors of unknown shapeshifters.”

“There is synchronicity at work here as narrator Moira Quirk nimbly delivers the quirky set of characters in this whimsical audiobook, the final volume of Carriger's steampunkish Custard Protocol series. This time out, the Spotted Custard journeys to Japan in search of a lost spy. At the same time, bookish Percival Tunstall and the ship's smart new doctor, Arsenic Ruthven, fall for each other. And what an odd bunch is caught up in the dirigible's orbit, including werewolves and vampires and kitsunes, oh my! The ringmaster of this flying circus is Quirk, sweetly voicing these strange adventures like they are nothing outside the norm, whether it's parachuting from a floating city or discovering a new supernatural species. She's the friendly captain on this memorable voyage.”

“I did not realize how much I wanted a Percy love story until I read this book. It was everything that I did not know I needed, and I am so glad that it exists. ”

“I can’t really say too much more without spoilers, but I love being in Percy’s head, I want to be Arsenic, and Spoo is great! Lots of old favourites and future characters popping up to say hi. A satisfying adventure and rescue. Politeness, fisticuffs and tea. Everything we love and expect from Gail Carriger”