I was reminded recently of a little story, I thought I would retell Gentle Reader, of when a certain debut author-beast first saw her book on a Real Live Bookshelf and the hilarity that ensued. 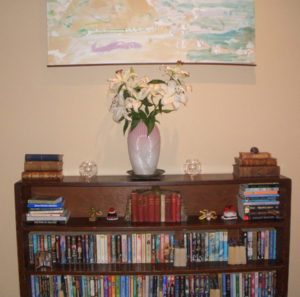 Read on, Gentle Reader, read on. (Originally this was a guest blog for The Unincorporated Man.) The First Time I Saw My Book In A Store

The first time I saw my book on a shelf in a bookstore it wasn’t in person. Instead, there it was, blurred by cell phone camera inefficiency, taken by one of my twitter followers in Minnesota. It was a week before Soulless was supposed to be released, so both she and I were taken entirely unawares and understandably confused by its presence. Well, it turns out, bookstores can do that with certain books: shelve ’em when they get ’em. No gag order ~ as it were. Mine was one of those books.

A small but enthusiastic following had been anticipating Soulless, and they were gratifyingly a-buzz to find it arriving early. Suddenly, the spies-I-didn’t-know-I-had went to work and began reporting in from around the country.

(Oh, wait, different headline.) And then, finally, a dear friend snapped a shot if it in my home state of California.

A day or so later, I was out shopping with a couple of girlfriends, as you do.

We were consuming those Vietnamese beverages with the black tapioca & gel shapes in them, Chè Ba Màu, affectionately referred to by me as From this awesome blog!

This process, three shopping females plus drinkies, involves much chittering and slurping and sideways perambulations. And thus engaged, we wandered by a Borders.

And so we do. And there it was! The chittering and the slurping became more enthusiastic as a result, which attracted the attention of one of the green t-shirted staff.

And so she disappears and returns with a whole stack for me to sign, right there: Drink with Stuff! in one hand, cheap pen in the other.

As we leave the store one of my friends keeps saying…

“I can’t believe they didn’t ask you for an ID or anything.”

“Oh, of course,” says I, “because there’s a mad plague of crooks masquerading as small-time authors dashing into unsuspecting stores and demanding to sign books they haven’t written.”

“Well, fine. But it’d be pretty funny if there were.”

And with that, I leave you to ponder what is obviously an untapped criminal market.

I’ve been nominated for a Compton Crook Award.

I always figure there is no way I can win anything against Paolo (Mr. Uniboob, himself ~ drunken hallway shenanigans, you kinda had to be there) but it’s exciting to be nominated for such very cool prospective winnings! You can read all about the award, here. It was Locus who called to tell me the news, thanks guys!

“Gail Carriger’s second novel successfully eludes a different curse, the sophomore slump. While the humor is occasionally overdone, Changeless is the equal of Soulless: witty, sexy, graceful, and unpredictable. With a few more novels this delightful, Ms. Carriger will be challenging Laurell K. Hamilton and Charlaine Harris for the top of the New York Times bestseller lists.” Gosh, wouldn’t that be utterly amazing?